Please ensure Javascript is enabled for purposes of website accessibility
Log In Help Join The Motley Fool
Free Article Join Over 1 Million Premium Members And Get More In-Depth Stock Guidance and Research
By Lee Samaha - Sep 16, 2015 at 8:04AM

Deere's sales are falling, its inventory management is a concern, and its increasing amount of leased equipment could create pricing pressure in future.

In a previous article, I looked at the current trends within Deere & Company's (DE 3.80%) trading environment and concluded that the near-term risk was rising, even if the long-term case for the stock was still intact. For the benefit of readers looking for a deeper outline of the near-term risks, I've a created a graphical depiction below of what these rising risks are.

Deere's near-term risks
In a nutshell, the company's major near-term risks come from two sources. First, the possibility of a decline in sales, leading to the need to reduce its inventory via price cuts.

Second, the company has been increasing the amount of equipment it leases to farmers -- who may be holding out on outright purchases of equipment due to a fall in cash receipts -- and the subsequent creation of a glut of used equipment.

Pricing will take a hit in both cases, and given that Deere's management continues to forecast 1% positive price realization for 2015, pricing difficulty could hit the stock hard.

Inventory to sales ratio
I've touched on this subject before: Deere's inventory-to-sales ratio is notably better than that of its competitors, such as AGCO Corp or CNH Industrial NV. While Deere deserves credit for this, if its rivals get aggressive on pricing -- due to carrying too much inventory -- then Deere will be pressured to respond.

I'm using analyst forecasts because we don't know what the sales figure will be yet. It's useful to separate the data by quarter in order to reflect any seasonal effects. 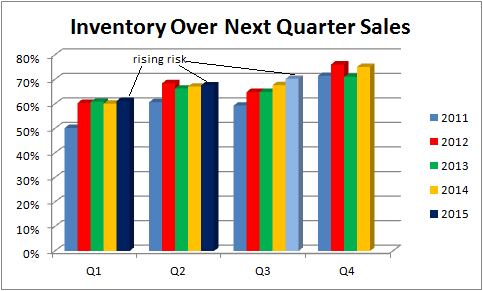 As you can see in the chart above, the data suggests that Deere's inventory position in the third quarter of 2015 looks a little high on a historical basis.

According to Deere's last 10-K filing, the terms on its equipment on operating leases range from four to 60 months, and the 10-K states that future payments to be received in 2019 total just $35 million, compared to $635 million in 2015 and $448 million in 2016. These figures suggest that Deere tends to lease equipment on a relatively short-term basis: 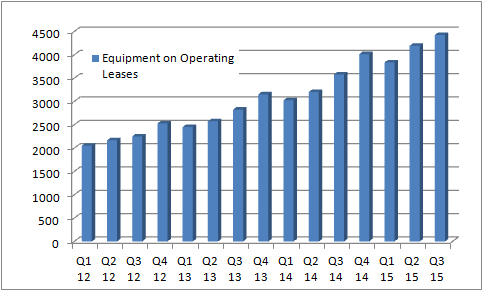 The following chart shows how leasing activity has increased while sales growth has slowed: 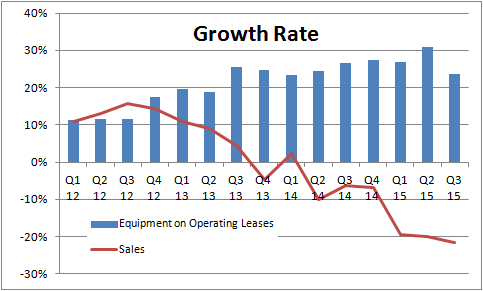 The risk is that at some point, Deere will face a situation where it will have to aggressively sell off the used equipment created by its leasing activities, therefore pressuring pricing for its new equipment. Indeed, management has already outlined that reducing used equipment inventory "continues to be a challenge."

The takeaway
Deere is doing a pretty good job of reducing inventory, but based on the analysis in this article, its current inventory is higher than usual. Meanwhile, its growing amount of leased equipment could create problems in the future.

In other words, the near-term risk is rising for the stock. But that shouldn't detract from the long-term potential for the company's earnings to improve in future -- given an increase in crop prices and sentiment toward spending on agricultural machinery.