ConocoPhillips' (COP 1.94%) CEO Ryan Lance knows that these are tough times both for his company and for the oil industry. However, he is very optimistic about his company's future because he believes the company has the four necessary components to deliver long-term success in the oil industry. He recently detailed these four key winning characteristics as well as the fact that ConocoPhillips possesses all four.

Winners and losers
Lance started off by saying that, "Certainly in times like these winners and losers will be determined by what we think are just a few things in the marketplace today." He then detailed the four things that set winners apart from losers,

Certainly asset quality -- it's important who has the most economic portfolio. Capital flexibility -- those who can flex with the cycles both up and down. Financial capacity -- who has the balance sheet to withstand some of the pressures that we'll see on the downside. And then, do you have a low, full-cycle cost structure, which is certainly essential in a commodity business we find ourselves in.

Lance noted that in order to win throughout the commodity cycle a company needed to be strong in four areas: Assets, flexibility, balance sheets, and costs. Being weak in just one of these areas could cause a company serious harm during a downturn. For example, we've seen that companies with weaker balance sheets have been devastated by the downturn as they've needed to focus nearly all of their efforts on propping up their financial position just to stay afloat. Meanwhile, companies that are strong in all four areas have been able to manage through the downturn even if they too have been affected by the low oil price. However, that impact hasn't called their survival into question as it has for many of their weaker peers.

We have a large, diverse asset base; multiple sources of growth; a large inventory, a growing inventory, of low-cost-of-supply opportunities; significant resources in the key trends; and a relatively low execution risk ... Our capital flexibility is increasing as large mega projects near completion. We certainly have a strong balance sheet with significant financial capacity, and a long tradition of technical excellence and execution.

As Lance notes, ConocoPhillips' foundation is built upon its strong asset base. The company currently has 8.9 billion BOE of oil and gas reserves that can be produced today and make money in the current environment. On top of that it has another 7.3 billion BOE of resources that can be developed in the future with a supply cost of less than $60 per BOE. Add to that the flexibility of having few major projects on its plate and a strong balance sheet, and this is a company that has everything it needs to win in the current environment. The reason why these characteristics win are hammered home in the following slide. 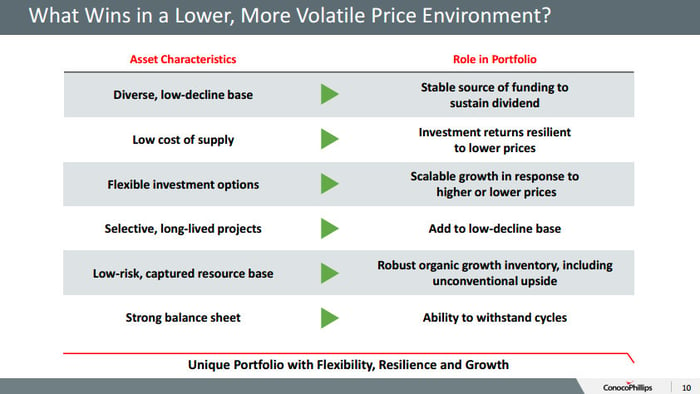 As that slide notes, ConocoPhillips has quality assets as the company possesses a diverse, low-decline asset base that deliver stable cash flow. It has capital flexibility as it has a number of investment options including selective, long-lived projects, such as LNG, oil sands, and offshore opportunities, to go along with a vast supply of shorter cycle opportunities in shale that can be scaled up or down quickly depending on prices. The company has a strong balance sheet that is "A-rated" by the credit rating agencies meaning it can borrow money at low rates when others cannot. Finally, it has a low cost of supply, which is critical to generating sufficient cash flow in a low oil price environment.

Investor takeaway
ConocoPhillips believes it has everything it needs to win in the current environment. While that doesn't mean that there won't be struggles along the way, nor that its stock price will shoot higher, it does mean that the company will do more than just survive. Further, when the upturn finally arrives, its assets, flexibility, balance sheet and costs will enable the company to quickly ramp up and capture that upside.