Please ensure Javascript is enabled for purposes of website accessibility
Log In Help Join The Motley Fool
Free Article Join Over 1 Million Premium Members And Get More In-Depth Stock Guidance and Research
By Daniel Miller - Sep 16, 2015 at 11:22AM

FCA CEO Sergio Marchionne made some valuable points recently about a potential merger with GM, but here are some things to consider.

When speaking to Automotive News regarding whether Fiat Chrysler Automobiles (FCAU) would pursue a hostile takeover of Detroit rival General Motors, this was FCA CEO Sergio Marchionne's response:

In the words of Ron Burgundy, "Boy, that escalated quickly." Let's take a look at Marchionne's thought process on this subject and why he might be right but the timing isn't.

In a way, he's right
There's no questioning Marchionne's intelligence or talent: The man has a great business mind. He's right: The automotive industry is extremely capital-intensive and could certainly benefit from consolidation. 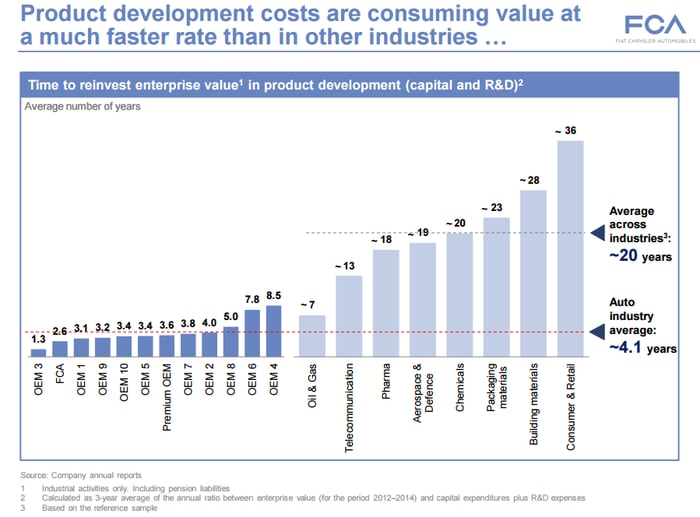 Enterprise value is a measure of a company's total value and is used as an alternative to market capitalization. Basically, this graph shows that the automotive industry is so capital-intensive that automakers are essentially investing the equivalent value of the entire company every four years into capital expenditures and research and development.

Part of that is because many competitors spend money researching the same thing. Are Ford's EcoBoost engines different enough from General Motors' (NYSE: GM) Ecotec engines to warrant each company footing its entire research and development bill? Marchionne's presentation suggests that there are many instances in which consolidation would solve overlapping product/technology expenditures -- focus on the pie chart on the right-hand side below: 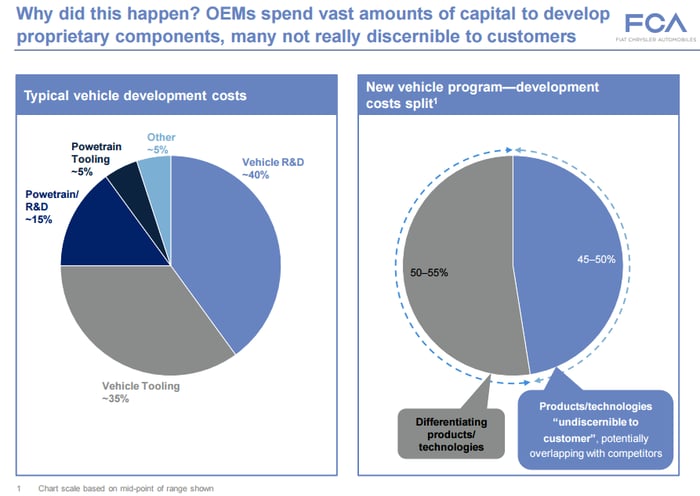 Too soon?
So it's clear that industry consolidation would provide benefits to automakers. However, automakers are barely half a decade removed from the financial crisis and still have low-hanging fruit to grab when aiming to improve efficiencies and reduce costs.

For instance, GM is pulling Chevrolet out of Europe, exiting manufacturing in Australia and Indonesia, restructuring Thailand, and reducing its presence in Russia. Those moves will eliminate half a billion dollars in annual losses and will free up roughly $1.5 billion in planned investments over the next four years.

Furthermore, GM still has plenty of work remaining on consolidating platforms to reduce costs. GM will produce roughly 9 million vehicles globally on 26 platforms this year. GM CEO Mary Barra set an aggressive strategy to slash that number of platforms to four by 2025 -- a move that would save billions of dollars in costs.

Those are just the big-ticket items. There are plenty of other cost savings initiatives that GM has outlined for investors. 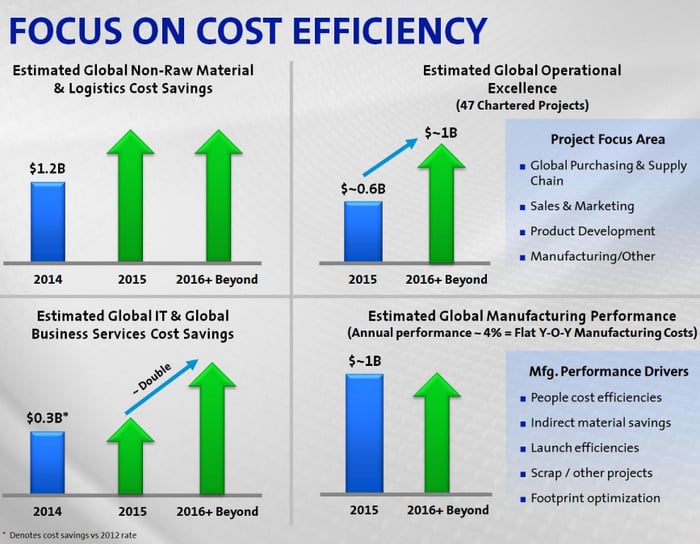 Investors also have to consider what GM would stand to gain by merging with FCA, besides the headaches associated with doing such. FCA comes with a lot of debt, brands that continually check in near the bottom of quality and satisfaction surveys, and a very expensive global turnaround plan to fund.

While a merger between FCA and GM would provide benefits, the former doesn't have much to offer right now when GM has plenty of easy pickings left to work through to improve its bottom line. After the automotive industry continues to improve on these aspects and the proverbial low-hanging fruit has been snatched up, then discussions of a merger will become a much more realistic option.