Please ensure Javascript is enabled for purposes of website accessibility
Log In Help Join The Motley Fool
Free Article Join Over 1 Million Premium Members And Get More In-Depth Stock Guidance and Research
By Travis Hoium - Sep 17, 2015 at 11:00AM

Gaming stocks have been hit hard over the past year. So, where does today's value lie?

Gaming stocks have been crushed over the past year as revenue in Macau has plunged from its all-time high. No one has been spared as industry leaders like Las Vegas Sands (LVS 15.06%), Melco Crown (MLCO 14.99%), and MGM Resorts (MGM 4.72%) have all fallen double digits. But the big loser has been Wynn Resorts (WYNN 13.17%), which has fallen as its primary VIP customers have been hurt more than competitors who focused on the mass market. Admittedly, Wynn Resorts has long been my favorite gaming stock, and short term, that's been the wrong pick. 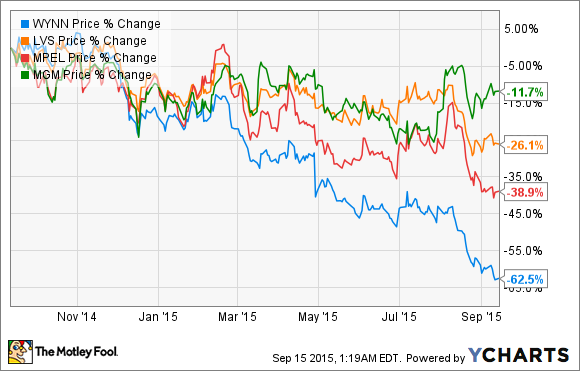 If we take a fresh look at today's prices, who is the best stock in gaming?

Where's the value?
The first thing to look at with gaming stocks is value. But with revenue and earnings dropping quarterly, it's important to look at the last year's results as well as the last quarter.

Below, I've outlined the enterprise value, or market cap plus net debt, of gaming companies as well as their trailing-12-month (ttm) EBITDA and last quarter's (mrq) EBITDA annualized. The annualized figure shows a more accurate valuation given the falling revenue environment:

Ironically, MGM Resorts is not only the cheapest stock in gaming right now, but it's also still growing because of strong performance in Las Vegas and less exposure to Macau than rivals. That's why I recently said the stock would continue to outperform this year.

Based on the most recent quarter's data, Las Vegas Sands is the next cheapest stock followed by Wynn Resorts and Melco Crown. What's interesting here is what growth potential looks like for these companies going forward.

What does the future look like?
All four companies have a single resort set to open in the next year or two in Macau. Melco Crown and Wynn Resorts will essentially be doubling their capacity (Melco Crown's Mocha Clubs, Altira, and Philippines resort contribute very little to financial results), so the resorts could have a big impact on earnings. MGM Resorts and Las Vegas Sands have over two dozen casinos combined so their new resorts will have a smaller impact. With only that considered, Melco Crown and Wynn could be cheap stocks.

But there's major downside risk for Melco Crown and Wynn Resorts as well. Melco Crown has already warned investors that the number of table games it gets from the government at new resort Studio City "may be lower than anticipated" and has hired investment bank Kirkland & Ellis LLP to assist with contingency plans. If it's not given many, or any, table games, the property could lose money from Day 1, sinking the company's earnings.

At Wynn Resorts, the plunge in VIP play has hit Macau's earnings hard but that's trickled its way to Las Vegas as well. Wynn Las Vegas' EBITDA fell 24% last quarter and Macau's EBITDA was down a whopping 44%. If the trend of VIPs avoiding Macau continues, Wynn's earnings could continue to fall. Wynn Palace may help that trend slightly but we won't know the impact until the middle of next year.

Circling back to MGM Resorts and Las Vegas Sands, a more diverse set of resorts around the world has shielded them slightly from Macau's downturn compared to Wynn and MGM Resorts. That's helped them over the past year, but it also gives less upside potential.

Melco Crown is the one stock in this group I would avoid given the downside potential at Studio City and the less-than-compelling valuation.

Las Vegas Sands and MGM Resorts are both well positioned, but when balancing risk and reward, I think MGM Resorts is the best stock in gaming today. Its resort in Cotai could add close to $1 billion in EBITDA and with MGM's 51% stake in MGM China, that's a huge impact. And Las Vegas continues to see healthy revenue growth outside of baccarat, which is affected by the downturn in China. So, Las Vegas will be a solid market for the company.

There's always risk in gaming stocks, but MGM Resorts looks like the best-positioned stock today. Unless Macau makes a surprise comeback, it could be the best gaming stock for a long time to come.