These days, T-Mobile subscribers can go on jaunts almost anywhere without worrying about crazy roaming charges.

T-Mobile USA (TMUS 1.03%) is back to its good old "Uncarrier" tricks again. This time, it's not exactly a new idea. Instead, the mobile network pushed out a huge upgrade to one of the first Uncarrier policies.

Way back in October 2013, T-Mobile's Uncarrier 3 update added generous international coverage to the company's most popular calling plans. In more than 100 countries, the so-called Simple Global policy provided a flat calling fee of $0.20 per minute and other benefits to American T-Mobile users traveling abroad.

This Thursday, the company expanded that old policy significantly. Adding 20 new countries to the list of low-cost coverage areas, T-Mobile's international roaming policy now covers 145 nations, including the entirety of Europe and the Americas.

According to T-Mobile's press materials, Simple Global now handles more than 90% of the international trips Americans take in a typical year. The new destinations include popular vacation spots like the Bahamas, Haiti, and Monaco, as well as several British island territories and far-flung former Soviet states.

In fact, the Uncarrier 3 policy is becoming downright global these days. After this update, T-Mobile subscribers can make low-cost calls with free data and SMS texting services everywhere except for most of Africa and a few blind spots across the Asia-Pacific territories: 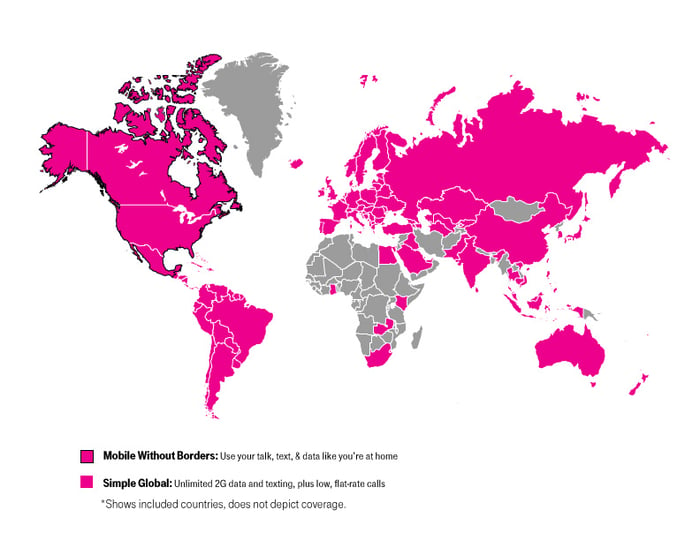 T-Mobile made sure to include a few test cases, where a hypothetical customer goes abroad with each of the Big Four wireless networks. As you'd expect, T-Mobile comes out much cheaper than the competition in ever case, though it took a cherry-picked trip to Portugal with massive data overages in order to crush fellow mini-major Sprint.

Here's how the various options work out for a jaunt to Bahamas, for example. You'll note that Sprint comes out looking pretty good in cases such as this one, while Verizon andAT&T subscribers consistently face excessive overseas roaming rates:

The Simple Global plan has been popular with T-Mobile's users. According to the company, subscribers journeying overseas are using 140 times more data under this plan than they did before, along with a 10-fold texting increase and six times as many voice calls. The low-cost benefits come automatically, not requiring any sign-ups or extra fees. That's unique among the major carriers.

And as long as you're staying in North America, T-Mobile treats Mexican and Canadian connections the same as calls and downloads started on U.S. soil. That expansion was introduced two months ago. All told, the summer of 2015 has been pretty great for T-Mobile users with a global wanderlust.

These Uncarrier policies have helped T-Mobile outgrow all three of its chief rivals over the last couple of years. Since the end of 2011, T-Mobile has grown its annual revenues sixfold to $31.5 billion. Verizon's 16% sales growth over the same period was good enough for second place, which speaks volumes about how the top-line growth curves have worked out for Sprint and AT&T.

It's true that Magenta's game-changing ideas have come at a heavy cost. T-Mobile has burned $2.9 billion of free cash in the last four quarters while Ma Bell and Big Red delivered several billion of positive cash flows. At the same time, the larger networks have often followed T-Mobile's lead, copying several of the Uncarrier ideas one by one.

So the whole Uncarrier project gives T-Mobile economies of scale while making the company a thought leader in the American wireless industry. Share prices have also more than doubled in the Uncarrier era, while AT&T and Verizon have underperformed the market even if you account for their outsized dividend policies.