Read this before you conclude China's struggles will serve as a stumbling block for Apple.

At $116, Apple (AAPL 2.29%) stock may not be the same buying opportunity it was in late August when shares traded close to $100, but about $19 below its all-time high, and with shares trading at a meaningful discount to the S&P 500, the stock is still looking tasty. Indeed, some of the very concerns that may be keeping the stock suppressed are arguably overdone -- specifically, worries about Apple's waning growth potential for Apple's iPhone business in China.

Enter Apple CEO Tim Cook: The one person who would know best about Apple's struggles in China seems to be the most bullish on the company's potential in the country.

During Apple's September event, the CEO described iPhone sales around the globe as growing "by leaps and bounds." China, specifically, is among its hottest markets, with iPhone sales in the country soaring 75%, year over year, during the last quarter, Cook said, noting this growth easily trumps a 4% decline in year-over-year sales for the rest of the industry's performance in the country. 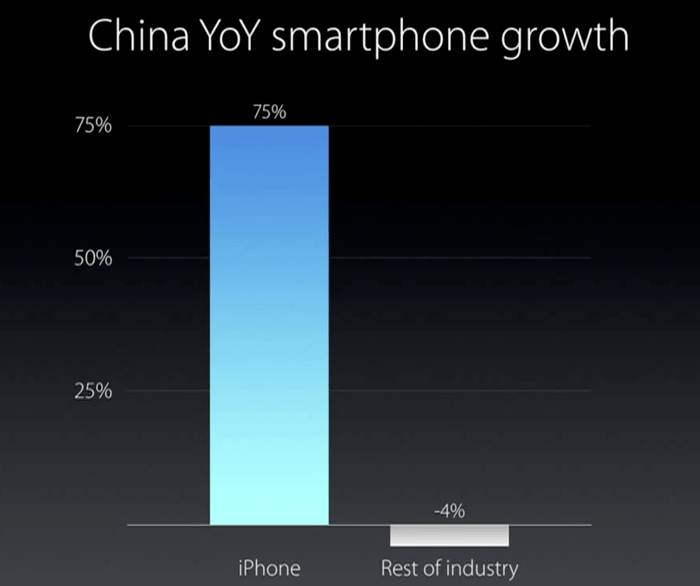 "But this data is from the second calendar quarter," some critics may protest, "What about demand for iPhone in China today?" iPhone continues to be a blockbuster hit in China, according to the most recent data provided by Apple -- data which was collected after China's decision to devalue its currency.

"Growth in iPhone activations has actually accelerated over the past few weeks," Cook said in a public letter to CNBC's Mad Money TV host and investor Jim Cramer on August 24. The bullish note from Cook came just as Apple stock was trading around $103, and probably at a time when the company was spending billions of dollars repurchasing its own shares.

"I continue to believe that China represents an unprecedented opportunity over the long term," Cook said later in the letter.

Apple in China: What's next?
Probably more solid growth. Apple has two near-term catalysts working in its favor for iPhone sales in China.

1. An iPhone launch in China. Last year, China was notably absent from the launch countries for iPhone. The phone didn't launch in the world's largest smartphone market until October 17 -- about a month after it launched in the U.S. But this year the company is bringing its latest iPhone model to China on the same day it will be available in stores in the U.S.: September 25.

And the iPhone 6s and 6s Plus look poised to be a winning duo in China. Given the current hot streak for Apple's iPhone 6 and 6 Plus line, which marked the tech giant's first foray into phablet territory, in China, Apple is just adding fuel to the fire with the improved versions of the same form factor.

2. Plenty of room for further LTE penetration. The greatest driver for Apple's iPhone success in China has been the country's growing 4G penetration. This massive catalyst started gaining steam in January 2014 when Apple launched its first iPhone with the world's largest carrier, China Mobile, alongside the carrier's aggressive rollout of its 4G network.

China may be up against some formidable headwinds. But Apple looks poised to continue charging hard amid these challenges.