ImmunoGen is on tap to deliver a presentation to investors tomorrow.

What's happening: Ahead of its investor conference tomorrow, shares in ImmunoGen (IMGN 0.85%) are jumping by 13% today.

Why it's happening: It's been quite a year for ImmunoGen's investors as shares have climbed 197% from their lows last December.

ImmunoGen's rally this year has been due in large part to the selling of its Kadcyla royalty revenue stream to TPG Special Situation Partners for $200 million in cash back in March and rising optimism for its clinical-stage pipeline.

Tomorrow, management will presumably offer up insight into how it plans to deploy its cash stockpile in the coming year to advance promising therapies including IMGN853, a therapy for ovarian cancer that put up impressive phase 1 results in June, into later-stage trials.

Additionally, investors could get updates on a myriad of other clinical stage oncology drugs, many of which are being developed with the help of big pharma collaborators, including Novartis. 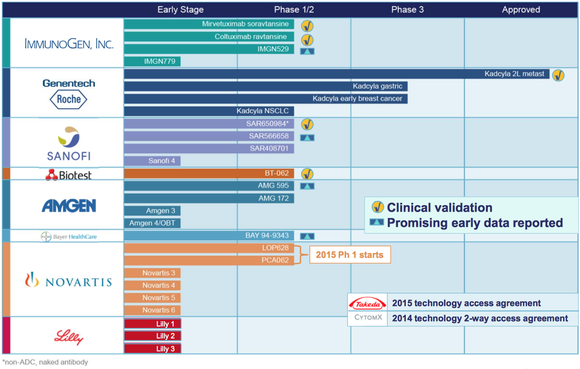 However, therapies of particular interest to investors tomorrow include IMGN529, which is being pursued as an adjunct therapy to Rituxan in B-cell malignancies, and IMGN779, a new anticancer medicine that the company has previously indicated it will submit an investigational new drug application for this fall. Updates on those drugs could be particularly insightful given that ImmunoGen hasn't licensed them out to a partner yet.

Overall, since there's likely to be plenty of information presented to digest tomorrow, investors may want to tune in.

Todd Campbell has no position in any stocks mentioned. Todd owns E.B. Capital Markets, LLC. E.B. Capital's clients may have positions in the companies mentioned. The Motley Fool recommends ImmunoGen. We Fools may not all hold the same opinions, but we all believe that considering a diverse range of insights makes us better investors. The Motley Fool has a disclosure policy.