Amazon.com (NASDAQ:AMZN) can't let Apple (NASDAQ:AAPL) have all the fun. While the Mac maker unveiled a slew of new gadgets last week, including the iPad Pro, iPhone 6s and 6s Plus, and Apple TV, Amazon is firing back with no less than 7 new "members of the Fire family." The new offerings cover a wide range of price points and capabilities for tablets and media streaming devices. Unsurprisingly, there is no follow up to Amazon's disastrous Fire Phone.

To start things off, here are all the new devices that Amazon is launching:

Other than the lack of a new smartphone, Amazon's new hardware announcements seemingly address the same markets that Apple is. Except there are some critical differences, even beyond the characteristic strategies that each company is pursuing where Amazon is tackling the low end while Apple takes the high end.

The tablet lineups are not comparable ... and they're not supposed to be
Four of the new devices are tablets, and the $50 Fire with a 7-inch display (including Special Offers to help subsidize the low price point) is a compelling value proposition in this end of the market. It only comes with 8 GB of storage but supports expandable storage and unlimited cloud storage for Amazon content. The e-commerce giant also claims that this model is "almost 2x" more durable than the iPad Air, which costs 10 times as much. As ridiculous as it sounds, Amazon is also offering a buy 5, get 1 free volume deal on the new Fire. The new Fire HD8 and HD10 tablets are fairly standard refreshes of Amazon's higher-end models.

The $100 Fire Kids Edition is specifically designed to take a beating. It also puts parental controls like usage limits front and center, and it simplifies the interface for profiles designed for kids. The Kids Edition is essentially the same as the new $50 model, except that it comes with a durable case and a 2-year guarantee that if your kids break the device, Amazon will replace it unconditionally.

While these new tablets technically undercut Apple, it's clear that the companies are focusing on entirely different market segments. iPad Pro is unmistakably positioned toward professionals and power users that are willing to pay a premium for greater productivity and creativity capabilities. None of Amazon's new tablets even attempt this, nor should Amazon ever be expected to. At a time when Apple is attempting to shift the iPad's positioning toward productivity and incrementally away from consumption, Amazon is embracing consumption devices in an effort to sell more content.

Amazon isn't going for the productivity angle at all. Image source: Amazon.

Amazon's most expensive model starts at $230, which is less than what Apple sells the 2-year-old iPad Mini 2 for. In fact, Apple's only update on the consumer side for iPad was the $400 iPad Mini 4, which it allocated all of 1 minute of stage time during the event.

Apple has made it very clear that it will always stay in the premium end of the tablet market ($200 or more), where it enjoys 76% market share and likely an even higher profit share. There's very little overlap in the customers that Apple and Amazon are going after.

Fire TV is a different story
But media streaming devices are entirely a consumer story, and Amazon's refreshed lineup here is very competitive with the new Apple TV. Amazon is bringing its virtual assistant to the $50 Fire TV stick, while Siri is only available on the new $150 Apple TV model. In this price range, the new Fire TV stick looks like a better value compared to Apple's aging $69 Apple TV. This update is primarily just a software update and a new remote; the Fire TV stick itself isn't getting any new hardware. 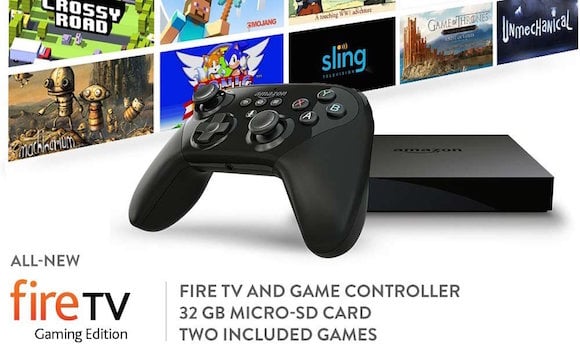 The new $99 model similarly features Alexa, but also supports 4K UltraHD content. Apple's new Apple TV does not support 4K UltraHD content, but for now this is likely a moot point. There isn't a whole lot of 4K content out there right now, and 4K adoption is still fairly modest (estimated at 12% of global TV unit sales in 2014, to say nothing of the existing TV install base). By the time that consumers are ready to actually care about 4K support, Apple will probably be ready to deliver it. Add another $40 to get the separate gaming controller included in the Gaming Edition.

The biggest difference in content availability is really limited to each company's proprietary platforms. Amazon Instant Video is not available on Apple TV, and iTunes is not available on Fire TV. Overall, Amazon will put up a solid defense here after grabbing the No. 3 spot from the Mac maker last year.