Investing wisely can be tough, and even the smartest and most disciplined of investors are bound to make their fair share of mistakes. We Fools are certainly no different, and whenever we make an investing mistake we like to learn from what we did wrong to make sure we don't repeat that mistake again in the future.

In an effort to share the lessons that we have learned over the years with you, we asked our team of Motley Fool contributors to share with us their top investing regret, and how they have adjusted their investment approach ever since.

Todd Campbell:  Shooting the moon investment approaches rarely pan out and in my past, inexperience and bravado led to a string of portfolio busting bets in call options that rank as my biggest investing regret.

Flash back to the Internet craze when stocks were soaring and everyone -- and I mean, everyone -- was investing in the market and maybe you'll understand why I became obsessed with trading call options.

Those call options allowed me to buy the right to acquire a stock at a particular price before a specific date for a fraction of the money I'd have to put up to buy the stock outright.

For a while, call options were wickedly profitable to me because I was able to sell them before their exercise date for more money than I paid for them (something that was pretty common during those heady times); however, because you can lose your entire investment in a call option when the bottom falls out on the underlying stock and it doesn't recover prior to the exercise date, I lost a big pile of money when Internet stocks burst.

Although this experience with options is one of the most painful of my investing career, it did teach me a critical lesson that hopefully will help shorten everyone's learning curve: never take on more risk than you can handle.

Brian Feroldi: While I've certainly made my fair share of investment blunders over the years, my biggest investing regrets have all been from selling a winning investment too soon because of an over-emphasis on short-term valuation metrics.

My history with Under Armour (NYSE:UAA) is especially telling. I first purchased shares in the apparel maker in 2010, as I loved the brand, the leadership, and the opportunity ahead of the company. Roughly a year later, that decision turned out to be profitable, and I was sitting on an 83% gain.

However, I began to get worried about the stock's valuation, as at the time it was trading at a price-to-earnings ratio in the mid-fifties. I felt that the shares were overpriced, so I decided to unload half of my position in the company and reinvested the proceeds elsewhere.

So what happened to the stock after I sold it in March 2011? Have a look for yourself: 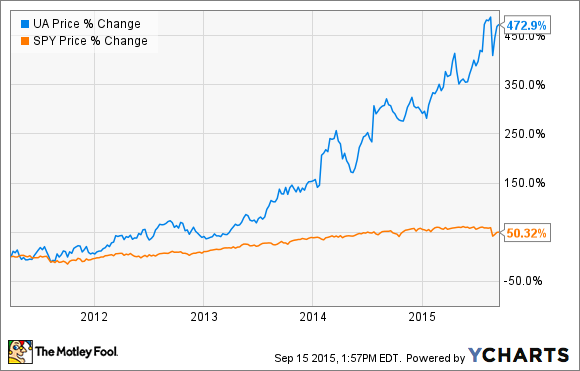 That's right, despite the shares being 'overvalued' when I sold them, they have gone on to absolutely crush the returns of the S&P 500. The smarter move at the time would have been to buy more of a proven winner, not to book a quick gain over short-term valuation concerns.

I've unfortunately made this mistake more than once, but I've since learned that when I find a great winning stock with an enormous runway ahead of it, a great management team, and a beloved brand, I'm no longer tempted to hit the sell button, even if the shares seem 'overvalued' in the short term.

George Budwell: Perhaps my biggest investing regret is using margin, or borrowing money from my broker to buy stocks, in order to try to time the markets.

When the market began to tank following the 2007-2008 financial crisis, I began buying several blue chip stocks, thinking they would rebound shortly. And eventually I ran out of cash to keep buying.

So as stocks spiraled lower and lower, I started using margin, thinking these top names would rebound shortly. Although I was right in that they would eventually rally, I woefully underestimated how steep the decline would be in the interim.

And then one day I got the dreaded margin call. A margin call is when your broker calls in the debt, stating that you need to either deposit additional funds or sell some of your securities. Given that I didn't have the funds to cover the amount needed, I was forced to sell off several top dogs like JPMorgan Chase that turned out to be great long-term buys in retrospect.

But because I got greedy and tried to time the markets, I ended up having to take double digit losses on numerous blue chips, many of whom have since soared past their former all-time highs during this latest bull market.

With this painful investing lesson indelibly etched into my mind, I now try to keep the long-view firmly in focus — no matter what the moody market is doing.