With preorders already off to a great start, will Apple's newest iPhone models carry this momentum into the launch weekend?

How many iPhones will Apple sill during this year's launch weekend? 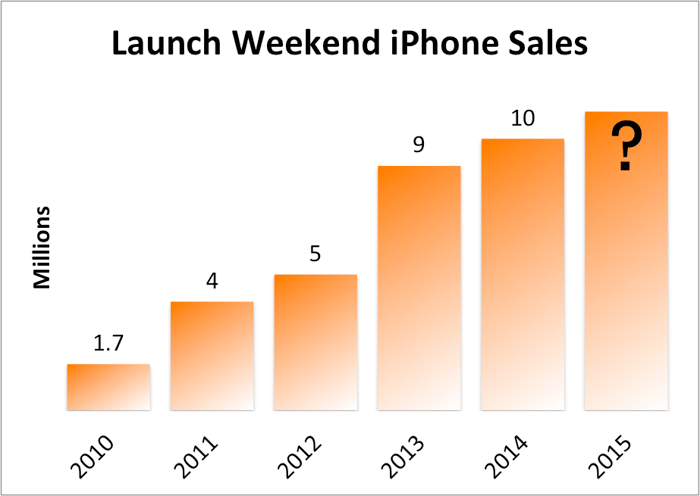 Strong preorders
The timing for the introduction, beginning of preorders, and in-store availability for Apple's latest iPhone is playing out in line with previous iPhone launches. Apple's newest lineup -- the iPhone 6s and iPhone 6s Plus -- were introduced during the company's product event on Sept. 9. Preorders began Saturday, September 12. And customers will be able to get their hands on the new smartphones for the first time on Friday, Sept. 25.

Based on a comment from an Apple spokesperson provided to CNBC on Sept. 14, early demand for the new iPhone was robust.

"Customer response to iPhone 6S and iPhone 6S Plus has been extremely positive and preorders this weekend were very strong around the world," Apple said. "We are on pace to beat last year's 10 million unit first-weekend record when the new iPhones go on sale Sept. 25.

Apple also said demand for iPhone 6s Plus "has been exceptionally strong and exceeded our own forecasts for the preorder period." This higher-than-expected demand is reflected in the slipping shipment dates for online orders of the device. As of Friday, Sept. 18, all iPhone 6s Plus models were scheduled to ship in three to four weeks.

Online orders for the all models of the smaller iPhone 6s, barring some of the 128 GB models and some of the rose gold versions, were still scheduled to ship by Sept. 25 on Friday.

How many iPhones will Apple sell?
With many of the online orders for iPhone scheduled to ship after the opening weekend, launch weekend sales will be a measure of Apple's ramp in iPhone supply more than it is a measure of demand for the new models. Of course, this normal; Apple always sells out of many of its new iPhone models for online orders ahead of the launch weekend.

Also per usual, the company is saving some versions of each model to sell at its Apple retail stores during the launch weekend.

As investors ponder how many iPhones the Apple may sell next weekend, the company's decision to add two additional countries -- China and New Zealand -- to the initial rollout this year reflects greater confidence in its ability to supply a higher level inventory. China, specifically, is the notable highlight of this year's additional launch countries included for launch. As the world's largest smartphone market, scheduling a launch in China alongside its usual markets may suggest Apple's initial iPhone production may be significantly better than last year.

So, with Apple's larger list of countries for the initial rollout in mind, along with a direct statement from Apple that it expects to beat last year's first-weekend record of sales that topped 10 million, it's all but certain the company will be setting a new record.