Please ensure Javascript is enabled for purposes of website accessibility
Log In Help Join The Motley Fool
Free Article Join Over 1 Million Premium Members And Get More In-Depth Stock Guidance and Research
By Daniel B. Kline - Sep 19, 2015 at 11:18AM

The company is working with three new cities, but it's just the start of the process.

Google (GOOG -1.29%) (GOOGL -1.34%) has been especially picky about where it rolls out its Fiber high-speed Internet and television service. Though the product has been around since 2011, the search giant offers Google Fiber, which promises a connection that's "up to 1,000 megabits per second," in just a handful of metro areas.

The soon-to-be-Alphabet-owned service does have expansion plans, however, and three new cities are being considered. That's only the start of the process, and being put into consideration does not guarantee that Google will actually bring Fiber to the market. These three new markets -- Irvine, Calif., Louisville, Ky., and San Diego -- join the nine metro areas that began the process last year (and the three cities that already had the service.)

Currently the company has three categories of Fiber cities -- ones where the service is being offered, the original nine expansion possibilities, and the three recent additions.

It's a long road, where Google essentially tests whether the community will actually be easy to work with, or whether bureaucracy will make it not worth the company's time. It's a novel process that's decidedly refreshing and more driven by trustworthiness, relationships, and humanity than the bottom line. 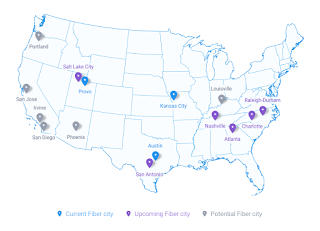 Irvine, Louisville and San Diego will join 12 metro areas where Google is already operating, or planning to operate, if everything tests out. Source: Google.

How it works
Once Google has identified a new market for Fiber, the next step is to begin a joint planning process with city leaders. The company outlined the process in a blog post:

To kick things off, we'll work with Irvine, Louisville and San Diego to conduct a detailed study of factors that affect construction, such as local topography, housing density, and the condition of existing infrastructure. Meanwhile, cities will complete a checklist of items -- such as providing a map of utility lines -- that will prepare them for a large-scale fiber build.

Bringing Fiber to a new market involves a massive resource outlay for Google, and the company needs to know that the community has the proper assets in place. What's not quite being said, here, is that the search leader also wants to see if the community's political powers are actually easy to work with.

Yes, the checklist must be met, and all the technical i's must be dotted and the planning t's crossed off, but Google only wants to bring Fiber to markets that will actually appreciate it. The planning process is essentially a series of first dates to judge compatibility before moving forward. It's not a foolproof test (just like dating someone isn't always an indicator of whether marriage is a good idea), but it's a method for Google to at least limit its mistakes.

This process makes sense
Google's checklist puts the onus of being ready for Fiber on the city. It's not a particularly onerous list, but it's one that will make it easier for the company to make a decision, and to ultimately roll out Fiber.

The list ask for things like access to conduits for cable, any laws which might apply to the various parts of rolling out the network, and proposed locations for the "FIber Huts," which serve as a shelter for communications equipment used by the network.

Cities get six weeks to complete the checklist, which should be easy enough in any municipality that runs well. Google lays out the timeline and spells out the steps. The rest is just information gathering that's like a big project a smart high school or college kid should be able to complete, as long as the city is actually cooperative.

Google has leverage
Because Google Fiber is heavily in demand, the company has the ability to be choosy about the cities it partners with. The checklist and the approval process assure that it will only work with municipalities that have the proper infrastructure and reasonably amenable governments.

This should force local governments to fall all over themselves to prove that they will be a good partner for the company. That's a sensible strategy for Google and a lesson to any city looking to throw off the yoke of its current broadband and cable providers.

Google FIier is not setting a high bar, but it is setting one. This is the search company famous for having a "you can make money without being evil" policy, testing potential partners not just for viability, but also for how easy they will be to work with. That's a smart play that ensures Fiber will come to the places that want it and deserve it most.