Every year, over 150,000 senior citizens get less money than they are entitled to when their Social Security checks arrive in the mail. The reason? They haven't paid off their federal student loans from their college days and that debt is following them into their Golden Years.

Recently, the National Student Debt Jubilee Project -- led by a husband and wife team of Harvard University Fellows -- has called for two essential steps to fix the problem: the cancelling of debt for students that were duped by for-profit institutions and a moratorium on all Social Security garnishments to pay back student loans.

While the group makes a fair case for the former, any consideration of the latter would set a dangerous precedent and lead to a continuation of the college cost insanity that pervades to this day.

For-profit students were ripped off

For the past five years, I have focused intently on the for-profit college industry. In 2011, I outlined my reasons for avoiding an investment in the (at that time) fast-growing sector: a heavy reliance on government funding and an alarming rate of default on student loans.

In the background, however, was an even more insidious observation: that many for-profit schools had effectively become agents to transfer wealth from the federal government to company executives and shareholders. This was all at the expense of predominantly minority and disadvantaged students who were often pressured or outright lied to in order to take on crushing loads of debt.

Already, the Department of Education has effectively shut down Corinthian Colleges and started to forgive the loans of some of its former students. Other colleges have recently gotten in the federal government's crosshairs, among them ITT Tech and Education Management.

And looking at where the vast bulk of student debt has accumulated, shutting down schools that used illegal and deceptive practices would make a big difference moving forward. A recent table released by the Brookings Institution shows just how big a role for-profit schools play in the nation's student debt problem. 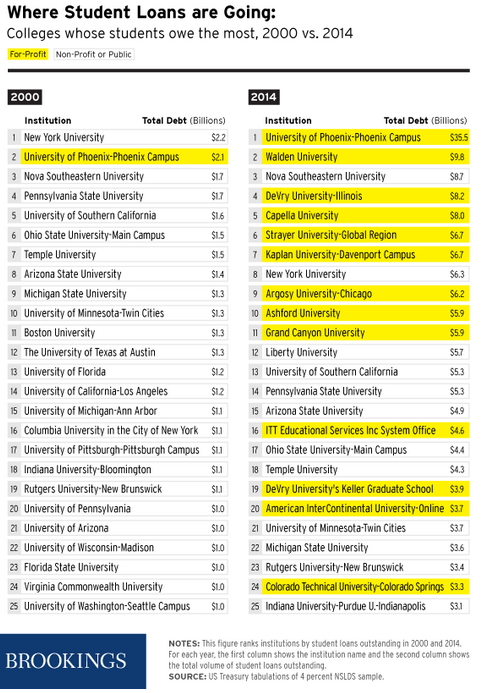 Not all students who owe money from their time at for-profit institutions would -- or should -- fall under this provision. While there was malfeasance at a number of schools, there were countless others that provided students with exactly what was promised.

Why Social Security garnishments must continue for all the rest
It's no secret that college costs have gone up precipitously.

Mary and Steven Swig, founders of the National Student Debt Jubilee Project, claim that this alone is completely out of the control of students who have taken on debt: "[T]wo generations of Americans ... were forced to take on student loans [and] are still struggling with the debt burden forced on them during our long and mistaken experiment with debt-based higher education."  (Emphasis mine.)

It is this mentality of powerlessness over their situation that I find highly alarming. Personal responsibility matters, and nobody had a gun to his or her head and was forced to take out loans so large that they can't be paid off by the time someone becomes a senior citizen.

Just because so many follow the path of "high school, then expensive college, then work" doesn't mean it's the only choice. To believe this is to give into an illusion that strips individuals of their own personal freedoms and creativity.

There are several -- much cheaper -- alternatives. In fact, many of them are so simple that they'll normally elicit an eye roll and a "yeah, but..." from a naysayer.

Our own Morgan Housel has outlined a way to get a degree from a four-year public institution at a fraction of the cost of what many pay: take time off before college to work, go to community college for your general education requirements while living at home, transfer to a four-year institution for your bachelor's.

There are other options, too: get an internship, start your own company, find a mentor to work under.

Best-selling author and risk expert Nassim Taleb laid out his vision for the future of education in a recent post on Facebook. In essence, he believes in the "Uberization of Education": a decentralized apprenticeship model where a student seeks out a teacher for education, bypassing institutions altogether.

Hell, if learning in a classroom is what you really want, you could easily sit in on a large university's classes without ever being noticed. When it comes time to find a job, offer to work for free so they can evaluate you on your merits instead of whether or not you've got a sheet of paper from a college.

Since you don't have crushing student debt, you could do it while living at home for a while.

I understand that what the Swigs are calling for is a one-time "jubilee" forgiveness, but it sets a very dangerous precedent.

If we simply forgive someone's student debt once they reach retirement, what's to stop today's graduates from going to an expensive college that they don't need to go to, taking on a load of debt that they can't repay, and avoiding repayments all the way through their working years -- knowing that once they hit retirement, it'll all be forgiven?

One prominent New York Times opinion writer has already thumbed his nose at the federal government, refusing to pay back the money it lent him to go to Colombia to get both his undergraduate and graduate degree. Apparently, he thought that attending such an uber-expensive school was the only way to "reach beyond [his] lower-middle class origins."

To that, I say he sold himself woefully short and fell for the same illusion that will only get worse if we grant his ilk forgiveness for their loans.