Please ensure Javascript is enabled for purposes of website accessibility
Free Article Join Over 1 Million Premium Members And Get More In-Depth Stock Guidance and Research
By Daniel B. Kline - Sep 20, 2015 at 8:02AM

The Berkshire Hathaway CEO is one of the richest men in the world and what he's doing with that money is even more impressive.

Warren Buffett is sort of the anti-Donald Trump.

While the TV star/real estate developer never hesitates to tell anyone who might listen how great he is, the Berkshire Hathaway ( BRK.A -0.56% ) ( BRK.B -0.44% ) CEO keeps an incredibly low profile. Trump splashes his name on everything from buildings to vodka (despite not drinking), a failed faux university, a defunct airline, and even a blimp once; Buffett chooses to remain in the background.

Both men are clearly successful, but Buffett has chosen to let his business dealings speak for him. The "Wizard of Omaha" has also made a conscious decision to avoid most of the trappings of wealth. While Trump (and most billionaires) opt for mansions, showy cars, and other fancy whatnot, Buffett lives in the same Omaha, Nebraska, home he bought in 1958 for $31,500.

Buffett won't be putting his name on a skyscraper and he isn't likely to buy a sports franchise or show up on a reality show. What the modest billionaire will continue to do is the one thing he does almost as well as any other person on Earth: make money for himself and his shareholders.

He may not have a catchphrase or be feuding with the news media, but Buffett has more money than all but two other people on the planet.

What is Warren Buffett's net worth?
The Berkshire Hathaway CEO came in at No. 3 on the annual  Forbes list of billionaires for 2015. His $61.8 billion fortune places him behind only Bill Gates and Mexico's Carlos Slim Helu on the list. Buffett was actually the biggest gainer on the list at the time it was released jumping up $14.5 billion since 2014, but his fortunes have sagged a bit in the recent stock market struggles.

Most of Buffett's self-made fortune remains tied up in his company's stock so his net worth rises or falls based on its ups and downs. 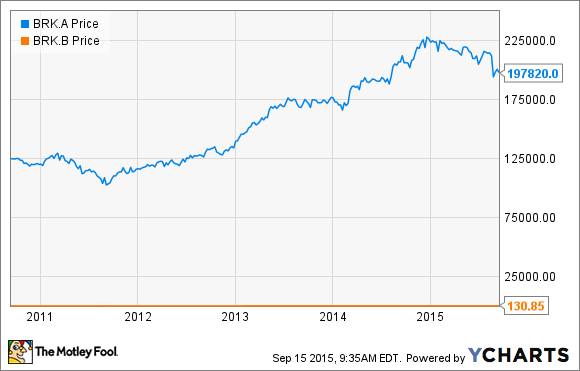 As you can see, Berkshire Hathaway's A stock has been mostly rising for the last few years. Source: YCharts.com.

Where is his money going?
While he has proven incredibly good at making it, Buffett has seemingly never cared much for money and he has pledged to donate the vast majority of his fortune to charity. He joins other billionaires, including Gates, in taking The Giving Pledge, a decision he explained in a letter on the organization's website.

"Were we to use more than 1% of my claim checks [Berkshire Hathaway stock certificates] on ourselves, neither our happiness nor our well-being would be enhanced," he wrote. "In contrast, that remaining 99% can have a huge effect on the health and welfare of others."

The billionaire pledged that during his life or at his death, 99% of his fortune will go to philanthropic efforts.

Buffett also explained his personal philosophy toward what money can buy in his letter:

Some material things make my life more enjoyable; many, however, would not. I like having an expensive private plane, but owning a half-dozen homes would be a burden. Too often, a vast collection of possessions ends up possessing its owner. The asset I most value, aside from health, is interesting, diverse, and long-standing friends.

More importantly, though, he has shown that it's possible to do all those things and remain humble and true to yourself. Buffett did not make money in order to buy more stuff; he did so because he's very good at what he does.

In amassing his fortune, the Wizard of Omaha has affected countless people, saving jobs, building companies, and making money for people who invest in his company. That's admirable, but it's nothing compared to his decision to give away most of his billions.