It's certainly not the best times for Seadrill, but its declining debt and contract coverage could be enough to get it though some of its current woes.

Good news has been hard to come by in the offshore market as of late, especially for Seadrill (SDRL). The declining demand for offshore drilling projects, an oversupply of rigs on the water, and the need to finance another 14 rigs it previously ordered have all led to a more than 85% decline in Seadrill's stock over the past two years. 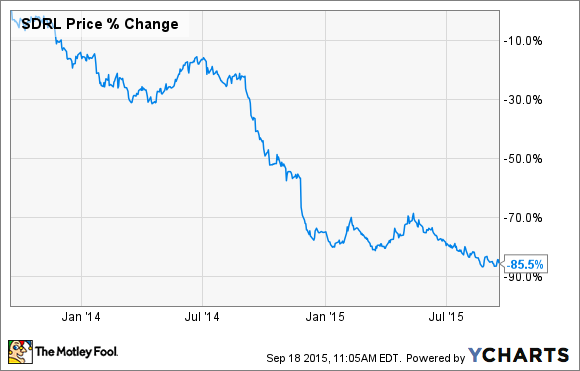 There are still several reasons to think that the worst of these market conditions are not over, but despite all the bad news, there are some encouraging signs that could show that Seadril may not be in as bad of a position as it looks today. Let's take a look at two things working in Seadrill's favor right now that suggest the company could get through this market downturn without too much pain.

Debt is down a bit
One of the biggest knocks on Seadrill is that its balance sheet looked atrocious compared to many of its peers. It's certiainly a fair argument that the company stretched itself too far debt-wise during this recent construction frenzy. One thing that may have gone unnoticed, though, is that the company has actually paid down some of its debt levels. Since the beginning of 2014, it has brought down its total liabilities by more than 20% to about $14.6 billion.

This gives Seadrill a total debt-to-capital ratio of about 52%, which brings it more in line with some of its offshore drilling peers than what it had been in years past. 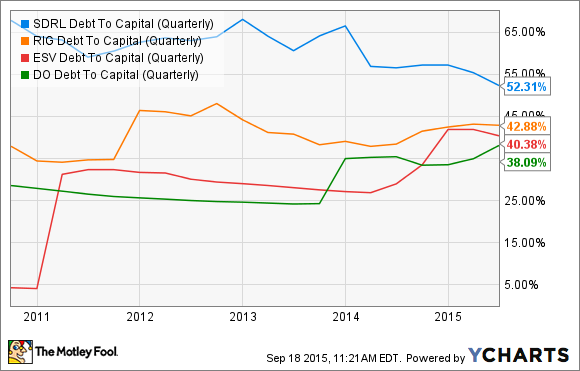 This may not completely solve all of Seadrill's debt woes. After all, it still has about $3.5 billion in new rigs under construction even after the recent cancellation of its West Mira drillship that it will need to fund one way or another. Also, it's looking like the option to drop down rigs to its MLP Seadrill Partners (SDLP) for cash is less attractive. Its debt levels are on the high end -- debt to capital is 65% -- so issuing debt isn't really in the cards, and its share price is down almost 70% in the past year. Issuing equity at that low price isn't exactly a valuable currency to raise capital, either.

It's very likely that Seadrill's debt will shoot right back up again to fund some of these commitments. However, it's actually possible that Seadrill could fund a decent portion of it through its own operations.

Revenue should hold up for a while
One thing that we have learned over the past several months is that rig contracts are certainly not written in blood. Seadrill and many other rig companies have seen their fair share of rig contract renegotiations and outright cancellations.  However, looking at the current contract coverage for Seadrill's fleet, there is reason to believe that its current revenue could hold up for a while to help pay down some of those obligations. Here is a table that shows the total amount of rigs coming off contract between now and the end of 2016.

*These rigs are owned by subsidiaries of Seadrill, of which Seadrill has a partial ownership stake. Source: Seadrill rig fleet status report.

Losing revenue from 11 rigs between now and the end of 2016 doesn't sound great, but keep in mind that the company has more than 40 rigs in its fleet on the water-generating revenue today. So there is a decent revenue base to work from here. With its first floating rig -- the big moneymakers for Seadrill -- not coming off contract until June, it gives the company at least three quarters of revenue relatively similar to what we saw the past two quarters provided there are no additions or changes to the current contract structure.

On top of this, the company has been able to reduce operational expenses, which this past quarter led to a 5% increase in EBITDA margin. If it can keep up the slightly higher margins with only modest revenue declines, Seadrill should be able to squirrel away some cash to pay for those newbuilds without needing to take on too much excess debt.

What a Fool believes
It's not exactly easy to build a strong case that Seadrill is a slam-dunk investment today. Its higher-than-industry average debt, its need to fund these new rig commitments, and the general malaise of the offshore rig environment suggest that it will take a while for Seadrill to wipe off the funk of this 85% decline. It's not all doom and gloom for the stock, though.

These next few quarters will be a major testing point for Seadrill. It has its most robust contract coverage between now and the middle of 2016 and the cancellation of the West Mira semi-submersible rig means its total yard commitments are about $600 million for the rest of the year. This could be an opportunity to tuck some operational cash flow away to fund the rest of its build program as well as hopefully lower its debt obligations even further. If it can do that between now and the end of next year, Seadrill's stock could be in much better shape.