Please ensure Javascript is enabled for purposes of website accessibility
Log In Help Join The Motley Fool
Free Article Join Over 1 Million Premium Members And Get More In-Depth Stock Guidance and Research
By Brian Feroldi, Todd Campbell, and George Budwell - Sep 21, 2015 at 7:47AM

Gilead's Hepatitis C treatments Sovaldi and Harvoni tend to grab all the headlines, but here are 3 other reasons that we Fools think Gilead is a top choice.

Biotech blue-chip Gilead Sciences (GILD 1.08%) has been a Fool favorite for quite some time, thanks in large part to the huge success of its best-selling Hepatitis C treatments Sovaldi and Harvoni. While we certainly have been impressed with the enormous growth that has come from these drugs, we Fools think that there are plenty of other reasons that investors should consider adding Gilead to their portfolios.

Here are 3 reasons why our Motley Fool contributors think that Gilead is a great choice for your portfolio today that have nothing to do with its dominance of the Hepatitis C market.

Todd Campbell: Gilead Sciences is a company that knows cash is king. The company's market share dominance is kicking off billions of dollars in free cash flow that Gilead Sciences is reinvesting back into its business via research and development and acquisitions and also funneling back to investors via stock buybacks and dividends.

Exiting the second quarter, Gilead Sciences' cash stockpile totaled a whopping $14.7 billion (yes, billion), up from $11.7 billion exiting 2014 and $2.57 billion coming out of 2013. Surging cash last year allowed Gilead Sciences to repurchase $5.3 billion worth of shares and led to it instituting its first ever quarterly dividend earlier this year.

Since Gilead Sciences has upped its full year sales outlook to at least $29 billion from earlier estimates of at least $26 billion, there should be plenty of money kicking around to keep buying back shares and to consider future dividend hikes, especially if its R&D investments and acquisitions lead to additional money-making drugs on the market.

Brian Feroldi: It's rare that an investor gets to use the words "biotech" and "cheap" in the same sentence, but given the valuation of Gilead's shares right now, I feel pretty confident that you can do just that right now.

Take a look at Gilead's trailing price-to-earnings ratio and price-to-free cash flow ratio over the last 12 months, and see if you can spot a trend. 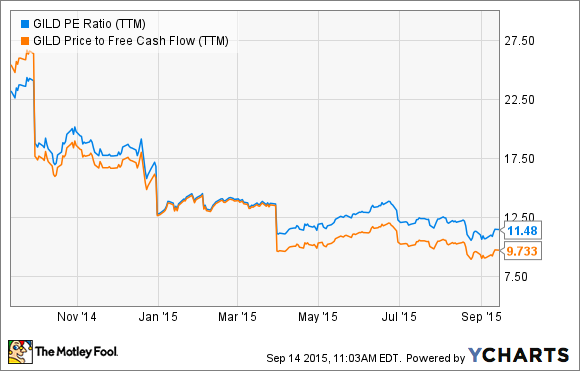 While Gilead's share price has mostly moved sideways over the past 12 months, the company has been so successful in growing its top and bottom lines that its valuation has continued to get better as the year has progressed.

With a valuation like that, it's no wonder that Gilead authorized a huge $15 billion share repurchase program, which is a move I applaud right now.

Now, this valuation would make sense if analysts expected Gilead profits to fall in the coming years, but that's not currently the case. Over the next 5 years analysts are projecting that Gilead will grow its profits by around 16% per year, which would be an impressive feat for as big as Gilead.

When you can have the chance to add a fast grower to your portfolio at a below-market multiple, I'd say that odds of investing success are on your side, which is a great reason that opportunistic investors should consider adding Gilead to their portfolios right now.

George Budwell: As noted by my Foolish colleagues, Gilead's monstrous cash position and compelling valuation are certainly great reasons to buy this stock for the long-term. But I think investors should keep the company's stellar track record of buying smaller, often clinical-stage biotechs and biopharmas in mind as well.

Since 1999, Gilead has snapped up 14 companies at a median purchase price of $467 million. For the most part, Gilead has shied away from emptying its coffers on multi-billion dollar acquisitions -- with the clear exception of the $11 billion Pharmasset deal that brought the game-changing Hepatitis C drug Sovaldi into the fold. Instead, the biotech has focused on using its own expertise at developing new drugs to acquire early stage assets -- mostly on the cheap -- to expand both its clinical activities and product portfolio.

Through these acquisitions, Gilead has shored up its position in the competitive HIV market, quickly evolved into the dominant Hepatitis C market leader, and launched important new products in the high growth areas of cancer and cardiovascular disease, just to name a few examples.

Going forward, more recent deals like the acquisition of Phenex Pharmaceuticals last year could put the biotech in favorable position when it comes to important emerging markets, such as nonalcoholic steatohepatitis and other devastating liver diseases.

All told, Gilead's M&A activity hasn't exactly generated many headlines over the years, but it has led to the diversified biotech we see today. I expect this trend to continue moving forward as the company looks to move beyond its deep roots in infectious diseases.