It's finally official. The first deliveries of Tesla's (TSLA 7.75%) fully electric SUV will take place on September 29. And the company will be hosting an event at its Fremont factory in California to celebrate the occasion. 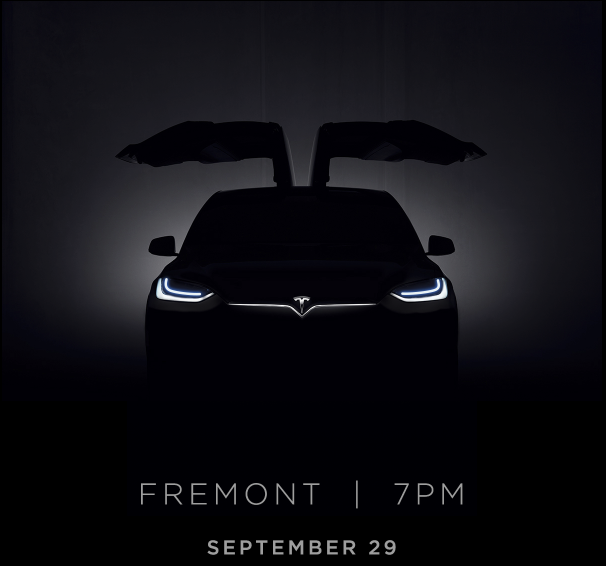 The event, which will begin at 7:00 p.m., will mark a major step for the electric-car maker. Its Model S sedan currently represents 100% of the company's new car sales. And following the sedan's wild success, it will now attempt to prove to the world it's not a one-hit-wonder. Can Tesla deliver?

Expectations
Tesla hasn't held back on talking up its upcoming SUV.

"In relative terms, it appears that the X will see at least as much as demand as the S," Tesla CEO Elon Musk said during the company's 2013 fourth-quarter earnings call. "And if I were to guess -- and this is just a guess -- I think the X demand will exceed S demand. ... That's my best guess."

This positive sentiment has continued into 2015.

"With the Model X, there's potential to double Tesla's [sales] volume," Musk said in an interview with CNBC in July.

Some information on the SUV has surfaced ahead of the launch:

Musk has talked quite a bit about the vehicle's second-row seats, calling them a "sculptural beauty" and saying, "they are the nicest second row seats you've seen in any car." While Tesla has given a limited number of early Model X Signature model reservation holders access to an online configurator, the configurator fails to show how the second row seats fold or move out of the way. Could the way the seats fold or move be one of the vehicle's selling points?

Investors are also wondering what exactly the base price for Model X will be. Given that the lowest priced Model S with dual motor starts at $75,000, and considering Musk's tweet about the X costing $5,000 more than a comparably priced Model S, the base model will likely cost $80,000 or more. But even this is uncertain, since it's impossible to know whether Tesla may include more features as standard with the Model X than it does with the Model S.

On September 29, investors will finally get answers to these questions and more.