Please ensure Javascript is enabled for purposes of website accessibility
Log In Help Join The Motley Fool
Free Article Join Over 1 Million Premium Members And Get More In-Depth Stock Guidance and Research
By Matthew DiLallo - Sep 21, 2015 at 9:04AM

ConocoPhillips' CEO Ryan Lance lays out the case for the company’s future growth and why a merger isn’t something it sees on the horizon.

ConocoPhillips (COP 0.39%) is no stranger to megamergers. The company got its name when Conoco and Phillips Petroleum agreed to a $35 billion merger of equals in 2001. Then in 2005, the company bought Burlington Resources for $35.6 billion. Today, however, the company isn't interested in pursuing another deal even as lower oil prices are focusing producers to look at every option to reduce costs, including mergers. Instead, the company plans to sit out any merger wave within the industry, as it already has everything it needs internally.

We have everything we need
At a recent conference, ConocoPhillips CEO Ryan Lance spent some time talking about the company's vast resource base and how important that was to the company's future. He pointed listeners to the following slide: 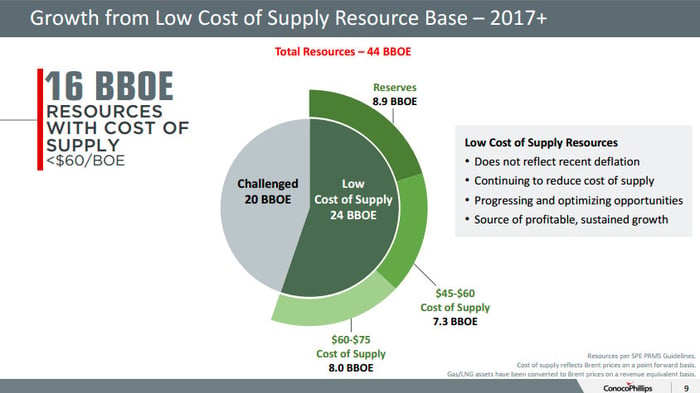 And then he said:

Today we have captured over 44 billion barrels of resources. Over half that has a cost of supply of less than $75 a barrel; 16 billion barrels of that resource has a cost of supply that's less than $60 a barrel. That's captured and exists within the company today. At current production rates that's over 30 years of resource. But we have the opportunity to invest capital ... with little resource risk. We know it. It's identified. It should accelerate value for the shareholders while increasing the profitability of the business.

As Lance notes, the company is currently sitting on 44 billion barrels of oil equivalent resources, more than a third of that, or 16 billion BOE, has current supply costs of $60 per barrel or less. That's an enormous resource base as it will keep the company going for decades. Because of this vast resource base, Lance said:

This resource is one of the reasons we're not compelled to do deals. We don't necessarily need to add resources to the company. And, importantly, this is how we can sustain our success for the long haul.

In other words, the company has more than enough oil and gas right now that it simply doesn't need to do a deal to add to its resources. Nor does it need to pursue a merger in order to drive its supply costs lower as it has plenty of low-cost supply. That's why the company is likely to sit out any merger wave as it just doesn't have any glaring needs. Having said that, it isn't going to ignore the M&A market totally.

Here are the deals ConocoPhillips will consider
At that same conference, an analyst pressed Lance to see what type of M&A deals the company might consider under the right circumstances. Lance responded by saying: "If we go acquire something and do that, it has to compete for capital within the portfolio in a world we think that's informed by lower mid-cycle prices and more volatility. So, with less cash and less capital, the hurdle for competition is pretty high in our company, given the 16 billion barrels of resource base that we have that has a cost of supply that's less than $60 a barrel."

In other words, ConocoPhillips would only be interested in making an acquisition if it found a company or an asset that was materially better than what it already owned. That's because that asset would have to compete against its already strong supply base.

Lance would go on to note that the company is already "doing asset deals, land swaps, trades every day, every month, of every year. So we look for those opportunities, for distressed opportunities." That's because these smaller bolt-on deals enhance its position in key resource basins.

However, what interests it the most right now aren't acquisitions, but divestments. Lance said:

We also look to sell some of our portfolio that people think that they might invest in. And we've been pretty successful doing that as well. And that frees up financial capacity and capability to take advantage of opportunities that might present themselves, or even invest back into our own business or to reduce the debt on the balance sheet.

As Lance notes, it is more interested in selling some of its assets than in acquiring more because it has so much on its plate already. Sales would only enhance its financial position during the downturn, giving it more money to invest in its best opportunities.

Investor takeaway
Despite its history of being a deal-maker, ConocoPhillips doesn't see it participating in any merger wave this time around. That's because the company simply has more than enough resources to develop organically. Instead, it would more than likely sell some of its assets to enable it to reinvest back into its asset base than to seek to grow that base any further.