Please ensure Javascript is enabled for purposes of website accessibility
Log In Help Join The Motley Fool
Free Article Join Over 1 Million Premium Members And Get More In-Depth Stock Guidance and Research
By Isac Simon - Sep 21, 2015 at 10:45AM

This beaten-down stock could be providing a long-term opportunity for income investors.

Over the past three months, Plains All American Pipeline, L.P.'s (PAA -0.18%) unit price plummeted 30%, while its general partner and holder of the MLP's incentive distribution rights, Plains GP Holdings, L.P. (PAGP -0.62%), lost 31% of its market capitalization. The question is: What should income investors conclude from this development? Does this spell doomsday for the company, or is it a short-term pain that would lead to long-term gains? Let's take a look. 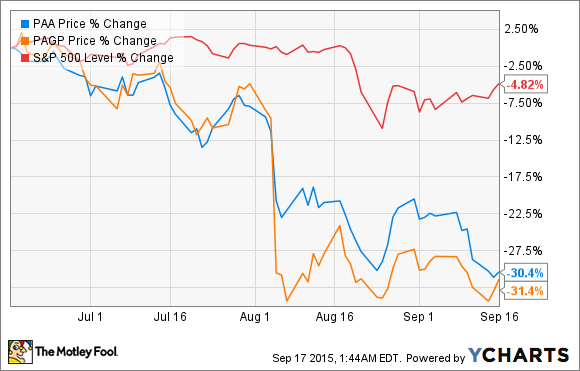 But it wasn't so initially
For the major part of the past 12 months, unit prices for both Plains All American and its general partner had been resilient despite falling crude oil prices (see the following chart), until this past May.

The trigger was a pipeline line rupture that ran along the pristine Santa Barbara coastline in California and was estimated to have spilled between 2,400 to 3,400 barrels of crude oil. 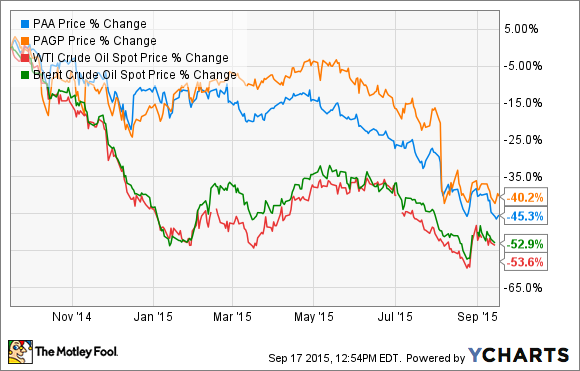 However, the bigger hit occurred last month, following Plains' second-quarter earnings call and revised guidance for the remainder of the year and for 2016. More importantly, management cut overall 2015 distribution growth to 6% (from 2014 levels) from an initial target of 7% while putting a freeze on 2016 distribution growth. The market didn't receive the revision too well, as we saw in the first chart.

But what's hugely surprising is that the market chose to ignore the master limited partnership's underlying strength based on its history of distribution growth. Also, fear seems to have blindsided the market to an extent that it doesn't want to place hope on the company's growth plans over the next couple of years based on lucrative projects in the pipeline.

A prudent decision by management
On the earnings call, CEO Greg Armstrong was pretty precise in his explanation on why distribution won't grow in 2016. Currently, the distribution coverage ratio for the first six months of 2015 stands 0.93. That means that for every dollar paid out as a dividend, the company has generated only $0.93 in distributable cash flow, or DCF. Obviously, that kind of a payout isn't sustainable in the long run.

However, management's primary objective is to maintain a minimum distribution coverage ratio of 1.05 -- or, in other words, generating $1.05 in DCF for every dollar paid out as distribution. And to reach that target, Armstrong said that 2016 distributions would have to remain at current levels while adjusted EBITDA is expected to grow "in the neighborhood of 10%" next year over 2015 levels. He also said that once oil prices are on a likely recovery path by 2017, the distribution coverage should return to "sustainably healthy levels." Armstrong expects adjusted EBITDA to grow a solid 30% in 2017 from current levels.

Any long-term investor would applaud management for having such a mindset. But again, how can the CEO be so confident about the future growth rates? The reason is quite simple.

The secret lies in imposing ship-or-pay contracts
Most of Plains' growth projects in the pipeline are backed by long-term commitments from crude-oil shippers and users of terminals and storage facilities, because of which management "feel(s) pretty good about the 10% growth in 2016 and roughly 30% in 2017 over the 2015 levels." That means there are ship-or-pay contracts (usually for a minimum period of three years) in place for those projects that are currently under construction.

While the usual business model of midstream companies is to charge a fee per unit volume shipped or stored, or a fee-based model in short, investors must also check whether growth projects are backed by such long term ship-or-pay commitments.

In such contracts, the shipper -- say, an oil producer -- must either ship crude oil through the MLP's pipeline or pay a penalty that's only slightly lower than the tariff, based on some initially agreed-upon terms. In either case, there's very low risk to the sustainability of the pipeline company's cash flow. And that, in turn, helps sustain distribution growth as new projects come into service.

Foolish bottom line
Plains All American Pipeline has increased distribution 43 times in the past 45 quarters at a healthy rate of 8.4% per annum. Also, actual financial performance has been in line or above guidance for the past 54 consecutive quarters -- not a modest feat at all! Currently, Plains All American Pipeline's distribution yields a massive 8.6%, and coupled with management's impeccable record, this could be a solid buying opportunity for Plains investors. It's quite clear that Plains is a case of short-term pain leading to long-term gains.