Please ensure Javascript is enabled for purposes of website accessibility
Log In Help Join The Motley Fool
Free Article Join Over 1 Million Premium Members And Get More In-Depth Stock Guidance and Research
By Matthew DiLallo - Sep 23, 2015 at 9:01AM

ConocoPhillips has a lot of work to do before the end of the year.

With oil prices remaining stubbornly low, it is forcing oil companies to take action to reduce costs and shore up balance sheets. ConocoPhillips (COP 2.31%) is no exception, as the company has cut billions from its capex budget while also trimming its headcount 10%. Given the outlook that oil will remain lower for longer, there are three things the company still needs to do before the end of the year to position itself for what could be another tough year in the oil patch.

1. Complete some non-core asset sales
ConocoPhillips has made it clear that it's really not interested in making an acquisition. Instead, it would much rather sell some of its non-core assets and use that case to bolster its financial flexibility. The company is reportedly marketing several asset packages around the world. It was reported in March that the company hired another bank to sell up to 20% of its production in Canada, which is primarily conventional natural gas assets. Then in April, it was reported that it had hired another bank to market of up to $2.5 billion of non-core assets in the U.S. that included asset in the Rockies, East Texas, South Texas, and Northern Louisiana. Another report earlier this year said the company was considering selling off some of its Norwegian assets in a deal that could bring in another $1 billion. Finally, the company is said to have also put its Inlet gas fields in Alaska up for sale.

Despite all of the reports, ConocoPhillips has yet to sell anything, though Bloomberg did report this week that its Canadian asset sale could be announced soon. Having said that, given that the company has publicly stated on a number of occasions that it would like to sell assets, it needs to make an announcement on an asset sale before the year is over.

2. Hit its $1 billion cost reduction target
ConocoPhillips set a goal to reduce its operating costs by $1 billion by the end of the year. This would bring its costs down from $9.7 billion in 2014 down to $8.7 billion in 2016. It remains on target to hit that goal thanks to its focused plan of attack, which the following slide details. 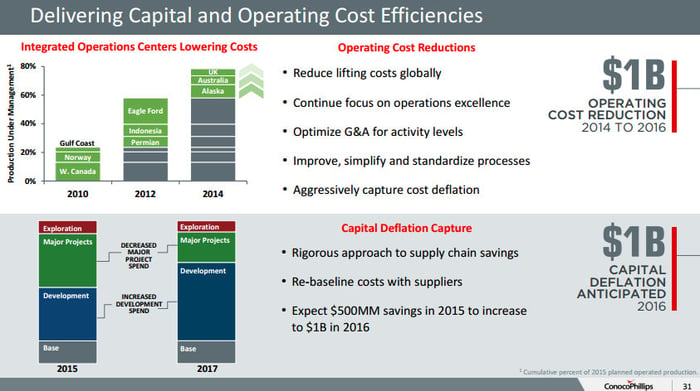 One of the biggest drivers of pushing costs out of its business is the company's long-term switch from an integrated "one-size-fits-all" business model to one that built around integrated operating centers for each of its assets. The company has discovered that these operating centers are better to drive out costs and improve efficiencies locally that the company could in its previous approach because each asset is different so the approach should fit that asset.

Clearly, the company has found something that works, now it simply needs to make good on its promise to take $1 billion out of its costs by the end of the year. Given that oil prices aren't expected to improve all that much in the near-term it can't afford to miss this target.

3. Determine the right level of growth in the current environment
When ConocoPhillips spun off its downstream and midstream assets in 2012 it freed the company up to pursue a growth plan driven by high-margin production growth. The original plan was to grow its production and margin by 3% to 5% per year through 2017. However, now that commodity prices have collapsed the company has scaled back on that plan and will now only grow production by 2% to 3% this year.

The company has further flexibly in 2016 as several major projects wrapped up this year. That provides the company with the opportunity to cut capex spending next year to a level next year that could further limit its growth. What the company will need to decide is if growing production makes sense next year, given the current commodity price, as well as the outlook for a weak prices next year.

Investor takeaway
While 2015 is winding down, ConocoPhillips still has a lot of work to do. It needs to complete at least one non-core asset sale to ensure that its balance sheet will remain strong even if oil remains lower for longer. Further, it needs to hit its $1 billion cost reduction target to position it for what looks like a very weak 2016. Finally, it needs to determine if it's worth investing the capital to grow production next year, given the outlook for commodity prices. By accomplishing these goals, the company will further strengthen its position to weather the current storm.