It has taken 14 years, but the General Electric Company is now firmly following the vision of Jeff Immelt.

Jeff Immelt has had his share of obstacles to overcome since taking over the CEO role at General Electric (GE -1.25%) in late 2001. It wasn't that his predecessor, Jack Welch, left him with a mess to clean up, but Welch simply retired at the very top. Immelt took over just days before the terrorists attacks of 9/11, and combined with the earlier bursting of the dot-com bubble and subsequent Enron scandal, it put a lot on his plate early on. These obstacles left Immelt with less time to focus on turning GE into the company he envisioned and more time putting out fires.

To make matters worse, the financial crisis in 2008 and 2009 cut deeply as GE had become heavily involved in the financial sector. The net result has been a languishing stock price for GE since Immelt took over. 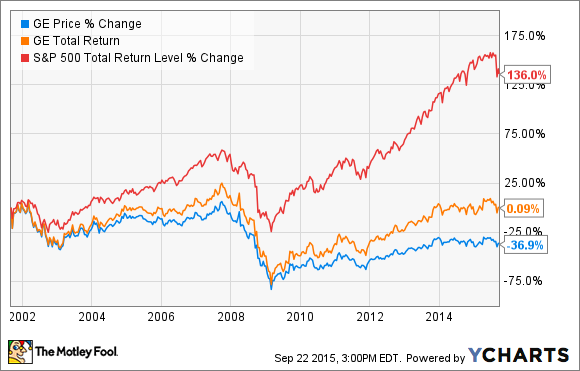 Going back to its roots
One of the core strategies of the new GE is that it is getting back to its roots of innovation. The company, which was founded by Thomas Edison in 1892, was originally a company of scientists and engineers. But under Jack Welch, the company let the focus drift to the point that R&D spending within GE fell to just 3% of revenue. It stayed at that level for quite some time, but Immelt boosted it up to 4% by 2010 and 5% by 2011 in an effort to get GE to go back to its roots that are steeped in innovation.

For example, the company has recently doubled down on its focus to develop clean technology for the energy industry. It plans to invest $10 billion by 2020 on projects specifically designed to make current energy technology, like oil sands and natural gas extraction, cleaner. The company is also at the forefront of the industrial Internet, which is also known as the "Internet of Things." GE is pouring billions of dollars into the field as it sees 50 billion connected devices by 2020, which are expected to add $15 trillion to the global economy. Needless to say, it's a massive market opportunity for the company.

Going global
At the same time, Immelt has GE looking inward to become a more innovative company, he is also pushing the boundaries of outward expansion globally. When he took control of GE in 2001 about 30% of its revenue came from overseas. Today, that number is north of 55%. That's by design as international markets, especially emerging markets like China and Brazil, are growing much faster than the U.S. and, therefore, offer a major opportunity for GE. 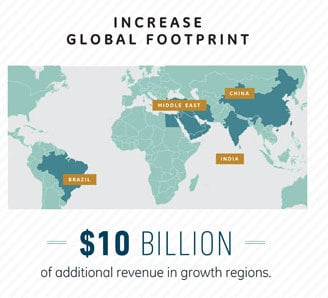 One of the moves Immelt is pursuing to become more global is a bid to take control of French engineering group Alstom. It has been a brutal fight for control, but Immelt has refused to back down because he sees Alstom being a key to GE's global future. Not because Alstom is based in France, but because it generates $10 billion in revenue from emerging market regions like China, Brazil, India, and the Middle East.

Immelt sees this as a crucial foothold to gain control over, especially given the dramatic growth projections for energy consumption in these regions over the next few decades.

Investor takeaway
While it has taken a lot longer than planned, Jeff Immelt's vision for GE is finally starting to take hold. The company is becoming much more innovative as it has increased its R&D spending as it works to drive growth internally. However, Immelt is also focused on external growth, particularly in emerging markets as these are growing much faster and offer the company a broader opportunity set. It's a plan that Immelt believes will take GE to new heights.