Please ensure Javascript is enabled for purposes of website accessibility
Log In Help Join The Motley Fool
Free Article Join Over 1 Million Premium Members And Get More In-Depth Stock Guidance and Research
By Daniel B. Kline, Jeremy Bowman, and Joe Tenebruso - Sep 23, 2015 at 8:40AM

Is it even possible for another company to catch up to the high-flying tech giant?

Apple (AAPL -0.82%) has firmly entrenched itself as the world's most valuable company, becoming the first to cross a $700 billion market cap earlier this year. It's now around $650 billion. That number dwarfs the company's nearest rivals, but as you can see from the chart below, most valuable company is a title which Apple has ceded at various points over the last five years.

So, while there's no reason to believe Apple will give up its crown without a fight, it is possible. A panel of Fools examined which companies might catch up or whether it will happen at all.

Jeremy Bowman (Google): Of all the companies poised to take Apple's throne, Google (GOOG -1.39%) (GOOGL -1.39%) seems to be the most likely successor.

Since its inception in 1998, the company has dominated the search advertising market, and profits and revenues grow significantly each year. Its stranglehold on that industry is so strong that the EU has accused it of being a monopolist, and it shows no signs of fading. Unlike the devices in which Apple competes, advertising is much more stable and Google's economic moat is huge.

The company's "moonshot" investments seem to be yielding tangible results as it's leading the race to develop a self-driving car. Such an achievement could lead to enormous profits as well, as such an invention threatens to disrupt a $9 trillion industry. Google is also progressing in other areas such as Nest, the Internet-connected thermostat system, an industry that's seen sales double in a year. Like self-driving cars, the "smart home" represents a huge potential market that the company could unlock.

The amazing thing about Google is it doesn't necessarily need to land one of these moonshots to topple Apple as revenue has jumped more than 150% over the last five years largely on the strength of search, and its market cap is about two-thirds of Apple's, essentially keeping pace with Apple throughout its extraordinary growth period. As it invests more in outside projects, I'd expect at least one of them to hit. Don't be surprised if Google takes the crown in the next 10 years.

Joe Tenebruso (Amazon.com): With a current market cap of about $250 billion, Amazon.com (AMZN 1.98%) has a long way to go before it approaches the size of the $650 billion behemoth that is Apple. Yet with several powerful catalysts fueling its torrid growth, I believe it's inevitable that Amazon will one day become the world's most valuable company.

No business is as well-positioned to benefit from the relentless growth of e-commerce as Amazon. With a valuable brand built upon a reputation for low prices, a wide selection of goods, and excellent customer service, the retail titan has become the first -- and often last -- place people shop online.

That's an enviable position to have, as online sales continue to take share from traditional retail channels. And even after years of explosive gains, the growth of e-commerce is likely to remain a multidecade opportunity, as online sales still comprise less than 10% of total retail sales. 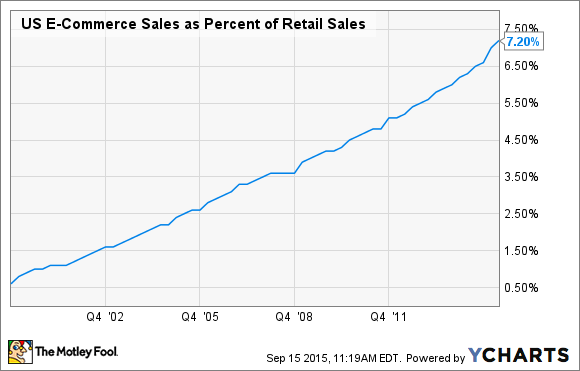 Incredibly, Amazon has another growth driver that may be even more powerful than its core online retail operations. Amazon Web Services has taken the world by storm, and has quickly become the dominant provider of scalable cloud computing services.

AWS has a massive market opportunity -- so large, in fact, that Amazon's management believes it could eventually rival the company's retail operations in size. The business is already making progress in that regard, with AWS' second-quarter revenue leaping 81% to $1.8 billion and operating income surging more than 400% to $391 million.

But AWS has just barely scratched the surface of its potential, and should continue to turbocharge Amazon's revenue and profit growth for many years to come. With these potent profit opportunities driving its results and a competitive position that grows stronger by the day, I believe Amazon will eventually eclipse Apple in size. As such, investors who buy shares of Amazon today stand to profit handsomely alongside the e-commerce juggernaut.

Daniel B. Kline (It doesn't happen): While a company, or several companies, may one day overtake Apple as the world's most valuable company, there's really no reason to believe that will happen anytime soon. The technology giant has the most successful smartphone, which people compulsively replace if not every year then at least every two. It also has a number of other hits, most of which show little signs of slowing down.

Of the company's core products only iPad has shown any weakness (though it's too soon to make any judgments on Apple Watch). Going forward it seems likely that iPhone and the Mac lineup will remain strong sellers while more people will make the switch to Apple Music. In addition, it seems likely that the new Apple TV will find its audience, but the real reason the company may hold onto the top spot is its upcoming products.

Apple has not confirmed that it's going to offer a live-streaming cable alternative, but it has been heavily rumored. Actually offering the service may take time because of the difficulty in negotiating rights, The New York Times reported but when the company sorts that out, it could do to the cable industry what it did to the music business. If Apple can create a service somewhere between DISH Network's SlingTV and a full cable package, it could win over millions of subscribers.

In addition, Apple has been silent on its plans in the automotive world, but its hiring of many industry experts suggest it has a car planned in the future. It's too early to speculate as to what that could mean to the bottom line, but a successful automobile project could go a long way toward keeping the company right where it is at the top.

Apple has a dedicated audience and it's currently a do-no-wrong brand with intense goodwill built in. There's no reason to believe that won't continue and that the company won't stay the most valuable one in the world.