Please ensure Javascript is enabled for purposes of website accessibility
Log In Help Join The Motley Fool
Free Article Join Over 1 Million Premium Members And Get More In-Depth Stock Guidance and Research
By Daniel B. Kline, Dan Caplinger, and Anders Bylund - Sep 24, 2015 at 9:00AM

The company has a lot of things in its favor including some superheroes and at least one Wookiee.

You don't need superpowers to see that Disney (DIS -4.46%) has been on a fairly impressive climb for the last five years.

But unlike some entertainment companies where past success does not guarantee future results, the Mouse House has been built for long-term viability. Much of that comes from its success with franchise building.

Take a hit movie like Frozen. That film will not only spawn sequels and successful merchandising but it has already drawn theme park attendance with special events and ultimately with new permanent attractions. Frozen characters even crossed over to the company's ABC network, appearing on Once Upon A Time.

Of course, the ability to cross-sell products, milk a success, and lock in diverse revenue streams are only some of the reasons to buy Disney stock. Our panel of Fools touches on the huge growth impact the company's franchises offer as well as how there is a potential for a larger dividend and how a recent dip in its stock price may have created a buying opportunity. 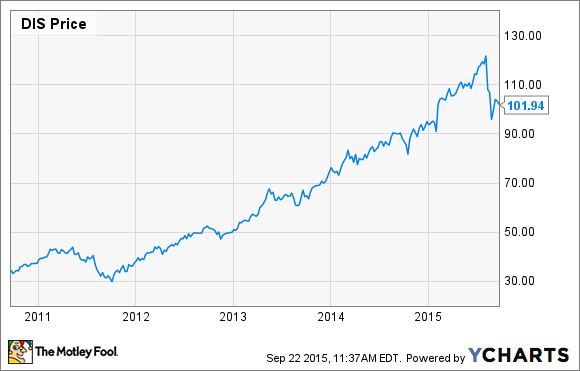 Dan Caplinger (dividend growth): Disney has huge growth potential, but one area in which the entertainment giant has lagged is in its dividend. The stock has a yield of just 1.3%, and based on its trailing earnings, Disney pays barely a quarter of its earnings to investors in the form of dividends. That leaves the company plenty of room to boost its payout over time and treat investors more like some of Disney's peers in the Dow Jones Industrials.

To its credit, Disney has done a reasonably good job in growing its dividend over the past dozen years or so, with its semiannual $0.66-per-share payout representing about a sixfold increase from its annual dividend payment in 2003. Nevertheless, given the rapid rate of stock-price appreciation, Disney's yield remains lower than the average for the broader market.

With so many lucrative opportunities ahead of it, one thing that Disney appears not to need is a huge amount of capital for reinvestment in the company's existing businesses. Given the amount of free cash Disney has on hand, taking more of it for returning to shareholders in dividends seems like a likely outcome, and that in turn could send the stock even higher than it is currently.

Daniel B. Kline (Marvel and Star Wars): Disney has built so much good faith into its Marvel movie universe that it can generate $400 million (and climbing) in global box office for the relatively unknown Ant-Man. The company has helped its cause by delivering a steady string of good, sometimes great films in the series but that's easier to do when you can attract top-tier acting and directing talent. That was perhaps hard to do when Robert Downey Jr., who was back then a not-so-safe bet, signed on for the first Iron Man but with a string of hits behind it, the company can have pretty much anyone it wants.

A Marvel release from Disney is about as close to a guaranteed hit as a company could have. In addition to its Avengers franchise and its growing branch of spinoff films, Disney also had the surprise mega success of Guardians of the Galaxy, which will spawn its own sequels. Handled carefully, which the company has done so far, Marvel can be a steady stream of movie hits along with all of the potential auxiliary revenue big blockbusters based on superheroes generate.

The same will almost certainly happen with the company's Star Wars franchise which has not only a new trilogy continuing the saga's story on tap, but also a trio of one-offs. The first of these, Star Wars Episode VII: The Force Awakens, has the potential to be the biggest movie of all tie. If it's good -- and it should be given the history of director J.J Abrams and writer Lawrence Kasdan -- then the company has another near-guaranteed billion-dollar box office hit each year already in its release pipeline.

Anders Bylund (Cheap shares): You already know that Disney is a brand for the ages, driven by strong characters like Mickey Mouse, the Marvel superhero army, and Luke Skywalker. The company has been around for nearly a full century, and seems likely to stick around for another hundred years. It's the kind of stock you can buy once, stuff under your mattress, and sleep soundly for decades while the shares generate value on autopilot: 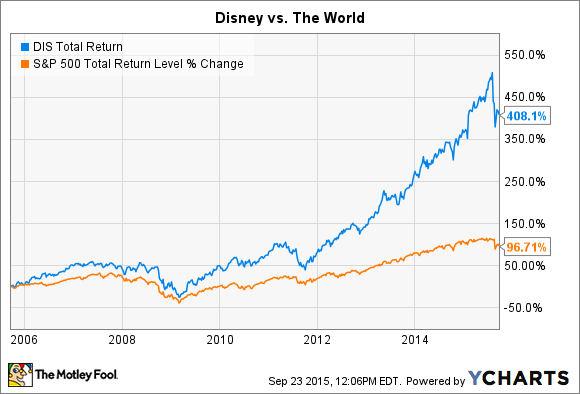 Yet, the stock is on sale right now.

Disney shares have declined 16% in less than two months, and now trade at levels last seen way back in January.

The drop was triggered by Disney's second-quarter report, where the company missed Wall Street's revenue targets by a hair due to soft ad sales for the ESPN family of premium sports channels.

But that problem is likely to be short-lived. ESPN is in the unique position of dominating the one and only type of media content -- live sports -- that doesn't have an equivalent in the cord-cutting world. Moreover, Disney has proven time and again that it is willing and able to adapt to an increasingly digital media market. If necessary, ESPN would take a deep interest in all-digital media streams as well.

So Disney stock offers a mouth-watering discount today, based on a downright myopic analysis of the evolving media markets. Buy at these tempting prices and ride the sprawling Star Wars, Marvel, Pixar, Donald Duck legion's success for years to come.

Heck, I added to my own real-money Disney position last week. The opportunity really is that tempting.