Please ensure Javascript is enabled for purposes of website accessibility
Log In Help Join The Motley Fool
Free Article Join Over 1 Million Premium Members And Get More In-Depth Stock Guidance and Research
By Jay Jenkins - Sep 24, 2015 at 6:17AM

Putting this $2.1 trillion balance sheet into terms that anyone can understand.

As of June 30, Bank of America's (BAC -0.61%) balance sheet was home to over $2.1 trillion in assets. That figure would rank as the world's eighth largest economy by GDP, just behind Brazil and slightly ahead of Italy.

But don't let the bank's massive size intimidate you. Any investor can understand its balance sheet, including you.

Up first: equity, liabilities, and leverage.
The first step to analyzing Bank of America's balance sheet is to take a look at it from a high level. We'll dive into a few key details next.

Bank of America has an assets-to-shareholder-equity ratio of 8.5, a reasonable level and in line with other banks in the U.S. That leverage ratio may be common in the banking world, but it's still high. For context, if you were to buy a house with that capital structure, your down payment would be just 11.7%.

The risk of all that leverage is mitigated by a few factors. First, banks rely on cheap, stable customer deposits as the backbone of their capital structure. That means that banks in general don't need to worry about funding sources drying up like companies in many other industries do.

54% of Bank of America's balance sheet is funded by customer deposits. Another 11% comes from predictable long-term debt arrangements, and 10% more from Federal Funds. 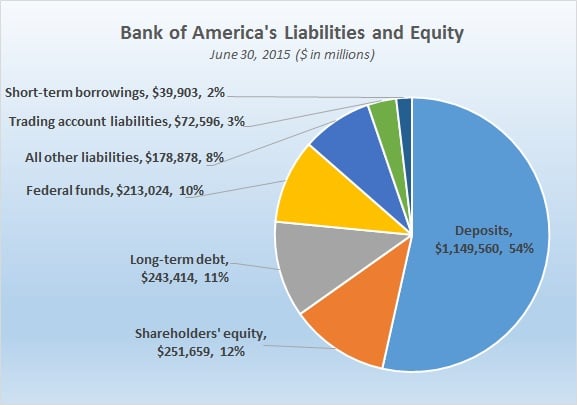 Second, the bank is considered well-capitalized using the common equity tier 1 capital ratio. This ratio is a complex calculation that takes into account not only the bank's ratio of liabilities and equity, but also considers the riskiness of the bank's assets and the level of reserves the bank has put aside for worst case scenarios.

Bank of America had a common equity tier 1 ratio of 11.2% in the second quarter. Regulators consider a 6% ratio to be the minimum level required to be considered "well-capitalized." For large, systemically important banks like B of A, additional capital requirements are being phased in as part of the regulatory overhaul following the financial crisis. By 2019, B of A must have a minimum tier one common equity ratio of 8.5%, a level the bank has already surpassed by 2.7 percentage points.

And speaking of reserves, the bank also maintains a rainy-day fund, of sorts, called the allowance for loan and lease losses, or ALLL. These reserves are earmarked to absorb any losses the bank may incur from loans potentially going bad.

Let's talk assets
On the other side of the balance sheet sits all of the stuff that Bank of America owns -- its assets: cash, securities, loans, and more.

In percentage terms, the bank's loans and leases make up a plurality of total assets at 41%. B of A is a bank, after all, and banks are primarily in the business of making loans.

The concentration in loans is consistent with the structure of the bank's income statement, as you'd expect, and 48% of Bank of America's revenue comes from net interest income from loans.

Additionally, Bank of America also holds $392 billion in debt securities. While not technically loans, these securities are largely backed by loans and function in a similar way providing interest income to the bank. Together, loans and debt securities represent 59% of the bank's assets. 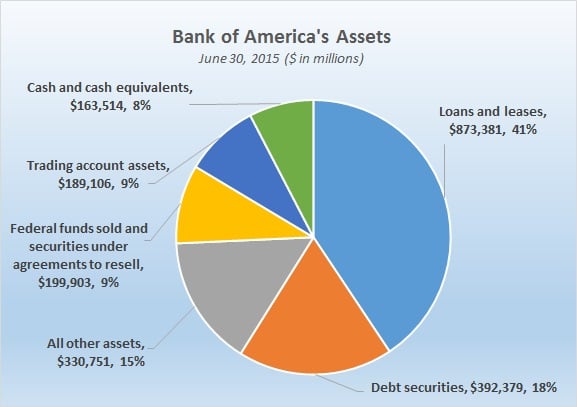 The bank also maintains high levels of liquid and almost-liquid assets. B of A reported $164 billion in cash or cash equivalents, plus an additional $200 billion in sold Federal funds and securities. Sold Federal funds and securities are short-term loans, typically with a maturity of just a single day, that are used to bring in a little extra income from the bank's excess reserves held at the Federal Reserve.

A simpler balance sheet than you probably thought
Understanding the bank's assets, liabilities, and equity in this way provides investors with the baseline knowledge needed to assess how the bank does business. You don't need an advanced degree in accounting or a career's worth of experience in finance to get up to speed.

There are loans and deposits. There's a fair bit of leverage. There's some cash put aside just in case the bank needs it. There's really nothing all that extraordinary about it, except for the $2.1 trillion sum if you add it all up.