Prior to the oil price collapse last year, EOG Resources Inc. (NYSE:EOG) had been the fastest-growing large oil company in America. While it has put the brakes on growth for the time being, that doesn't mean it's given up on what made it one of the rapidly growing oil companies: its focus on using new technology and innovation to get more oil out of each well. As a result, it is now drilling better wells than ever.

Drilling a better well starts with finding the best spots to drill within a reservoir. Part of the learning process with shale has been to rethink development ideas as it's not like a conventional oil reservoir, which is akin to putting a straw into milkshake and sucking the oil out. Unconventional plays need to be developed differently as the oil and gas is tightly trapped within the rocks. As such, they need to know where the most hydrocarbon-saturated rocks exist and specifically target those rocks.

As the slide below shows, EOG Resources puts together heat map, so to speak, of where the best hydrocarbon-bearing rocks lie and then targets those sweet spots. 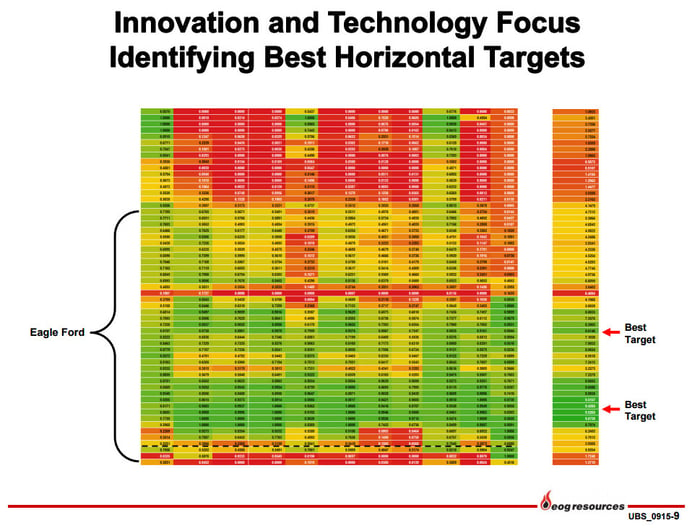 By identifying the best target, EOG Resources puts itself in the position to extract more of the oil and gas trapped in a reservoir. That leads to a higher production rate and yields better returns.

Tweaking the magic formula
The other big innovation over the past couple of years might not sound all that innovative. However, oil companies are finding that sand is the key technology to unlock more oil and gas from shale reservoirs. In fact, Devon Energy's (NYSE:DVN) CEO Dave Hager, for example, even called it technology by saying Devon is "using the more recent technology of finer grade sand" to get more oil and gas out of a reservoir. However, when it comes to sand, it's not just the type of sand being used but the volume being used, which is leading to stronger results. EOG Resources is finding that by using more sand in a well, known as a high-density well, it is producing greater quantities of oil than it had been in legacy wells, as we see in the slide below: 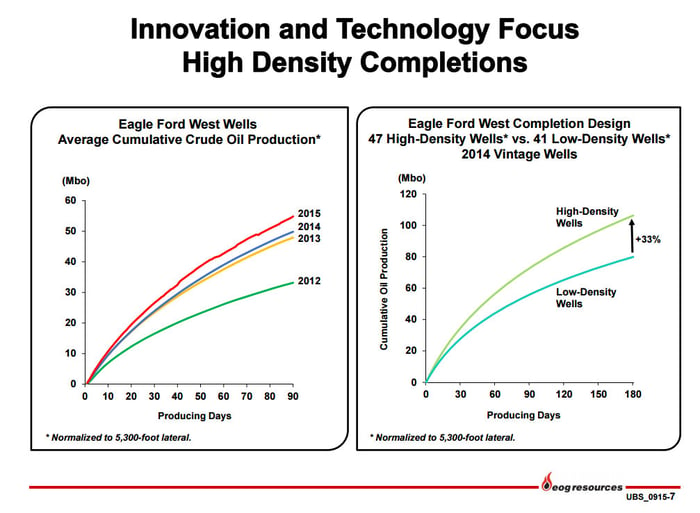 As that chart on the right shows, its high-density wells have shown a 33% improvement in cumulative production verses wells with lower sand volumes. Meanwhile, the chart on the left shows the steady well improvement the company has seen as it continues to innovate its well designs.

This focus on using more sand per well is something that Devon Energy, likewise, is finding to be a key to its success as it has been a leader in testing sand volumes. In fact, Devon is really pushing the boundaries to find the right formula, with Hager saying on the company's first-quarter conference call that the company has "[...] really made a conscious decision to step out and test various size sand concentrations and stepping up to 3,000 pounds of sand per foot and that too in some areas, so we can really understand what's the right size completion to put on each of our specific areas."

In other words, drillers like EOG Resources and Devon Energy are continuing to push the envelope of well design and sand volumes in order to drive better results. This is a trend that actually plays into EOG Resources strength as it has vertically integrated so that it owns a sand mine, which gives it unparalleled access to sand so that it can more easily test out volume concentrations on new wells.

Investor takeaway
EOG Resources is finding that its focus on technology and innovation is really paying off as its well results continue to improve. The company is now able to target the best zones in an oil and gas reservoir and extract more of those resources by using better completion technology that starts with greater sand volumes. It's a focus that will not only serve it well during the downturn, but that should lead to very strong results when conditions do finally improve.