Please ensure Javascript is enabled for purposes of website accessibility
Log In Help Join The Motley Fool
Free Article Join Over 1 Million Premium Members And Get More In-Depth Stock Guidance and Research
By Ashraf Eassa - Sep 24, 2015 at 8:00AM

It's about the complete platform.

In an article recently published on Fool.com, I argued that there was far more to Intel's (INTC -2.86%) Internet of Things business than selling $1 chips. In fact, Intel's IoT business generated more than $2 billion in revenue last year, and it's highly unlikely that the company sold a single chip for less than $5.

One of the more interesting opportunities for Intel's Internet of Things Group is in-vehicle infotainment systems. In this article, I'd like to explain Intel's automotive strategy and why it looks like a winning one.

Although Intel is known mainly as a chip company, it doesn't simply offer chips into this market. Instead, the company markets a "complete platform" that incorporates both hardware and software, which the company says should allow car makers to "speed up time to market" and "liberate their resources to focus on creating compelling user experiences."

From a hardware perspective, Intel provides what it calls a "compute module." The latest such compute module from Intel includes a system-on-chip from the company's Atom E3800 family (based on the same basic architecture that the company's Bay Trail tablet and PC processors are), an Intel Ethernet Controller, as well as power management and storage.

As far as software goes, Intel offers what it calls the "Intel In-Vehicle Software Foundation." This, the company says, is a middleware package that is pre-validated with the company's compute module "to enable faster time to market compared with traditional solutions." 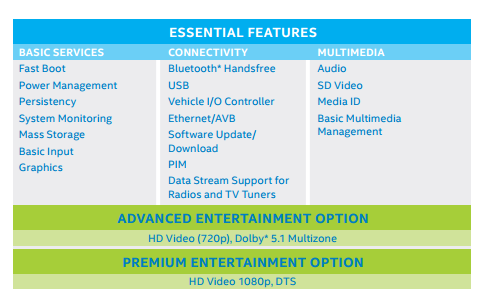 This is a growth market and Intel still has plenty of room to gain share
According to a slide that Intel showed at its investor meeting last year, the "transportation" portion of the market that the company's Internet of Things Group services is growing at a compounded annual growth rate of more than 30%. At the same time, Intel says that its share in this segment of the market is less than 10%.

I believe that Intel's solutions in this segment have gotten substantially more competitive and that they will continue to do so for quite some time.

Indeed, not only are Intel's Atom processors getting much better thanks to the company's mobile push (which should help Intel win future in-vehicle infotainment designs), but the company's acquisition of FPGA maker Altera (NASDAQ: ALTR) should allow the company to offer even more interesting solutions in automotive.

Here's his explanation of the value proposition of FPGAs (likely integrated with Intel's Atom processors) in assisted driving:

What we can do is work that workload off those ASICs and ASSPs at we believe an equal or lower cost and onto the FPGA. What that also does is allows people to update those algorithms real time and not have to go out to their car line and do adjustments to the hardware but actually be able to do that as the car is shipping out the door in software, and they can continue to make improvements in the safety and the quality of that vehicle as a result.

In a nutshell, if Intel can successfully integrate FPGAs with its Atom-based automotive chips (either on-package or on-die), then the company's automotive platforms could gain a significant competitive edge over competing solutions, boosting its share in this segment.