A gambler's loss is someone's gain. Where are the big gaming companies looking for growth?

The gaming industry is big business around the world, and Las Vegas and Macau are commonly known as the capitals of the industry. In fact, Macau dwarfed the Las Vegas Strip with $32.2 billion in revenue over the past year compared to Sin City's $6.3 billion.

With that in mind, it may surprise you in which country folks spend the most gambling.

Still the king of gambling
Despite its growing economy and penchant for gambling, China doesn't hold the top spot when it comes to most gambling losses by country. The U.S.'s $142.6 billion in gambling losses topped China's $95.4 billion in 2014.

Interestingly, U.S. gamblers spend a sizable chunk on lotteries, not in casinos. And most of the casino losses are outside of Atlantic City and Las Vegas, places synonymous with gambling. Casinos on Indian reservations, at regional casinos popping up around the country, and even betting machines in bars are where a majority of gambling happens in the U.S. 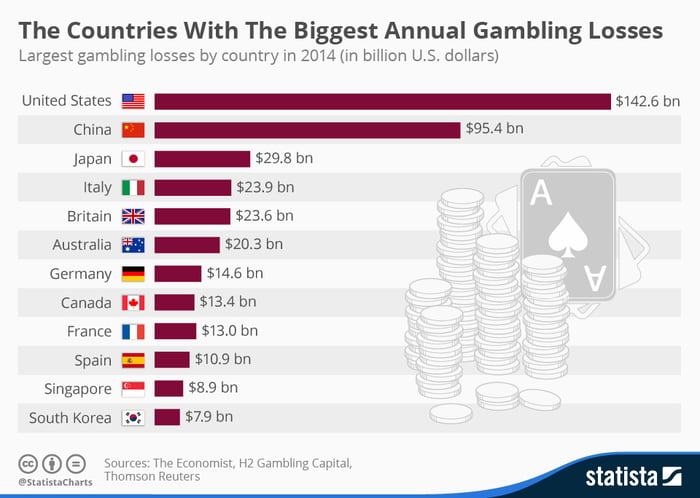 What's surprising about this data from H2 Gambling Capital and Thomson Reuters is that per-capita losses are led by Australia at $1,130 and followed by Singapore, the U.S., New Zealand, and Finland. Australia, in particular, is dominated by gaming machines outside of traditional casinos, so there's more to gambling losses than the glitzy casinos we associate with Las Vegas or Macau.

Where gambling sees a future
A gambler's loss is someone's gain, and you can see some hints above as to why China, Singapore, and Japan are on the top of casino companies' wish lists right now. Las Vegas Sands (LVS -0.17%), Wynn Resorts (WYNN -3.37%), and MGM Resorts (MGM -2.70%) are all growing their presence in China but have eyes for new markets in Asia as well. China is an obvious attraction for casinos, and with Macau the only place where casino gambling is legal in China there's limited competition, and once the current wave of construction is completed, it may be a while before the country allows more expansion.

Despite regulations that charge a fee for locals to enter the casino, Singapore's citizens are still flooding into gaming parlors. The region's two casinos are among the most profitable in the world as shown by Marina Bay Sands in downtown Singapore raking in $1.65 billion in EBITDA -- a proxy for cash flow from a casino -- in the last 12 months alone. Wynn Resorts has expressed interest in expanding into Singapore if a license opens up and given the love of gambling there, you can see why.

The next great opportunity for the industry probably lies in Japan, where the world's third largest economy didn't even make the top 15 in per-capita gambling. But the country's leadership is considering opening up bids for casinos and that could be a game changer for the industry. All of the major gaming companies are chomping at the bit to build there, including Las Vegas Sands, Wynn, and MGM. But the return could depend on if regulations limit locals or not. If they don't, Japan could approach China for gambling revenue.

There's big money in gaming these days
No longer in the shadows, gambling is big money around the world and some U.S. companies have a big piece of the action. Las Vegas Sands has generated $12.9 billion in revenue over the past year while MGM Resorts has pulled in $9.6 billion and Wynn Resorts has made $4.6 billion. That's big money for any business and with the world's love of gambling these companies will be raking in money for years to come.