Typically, investors flock to stocks like Chevron (NYSE:CVX) because of its resiliency through the ups and downs of the commodity market. Based on the company's performance over the past year, though, Chevron has been anything but that. Its struggle with declining oil prices and the bevy of big-ticket projects under construction have resulted in some big earnings declines over the past year.

Things may not look that great today, but that doesn't mean the company's future is bleak. Here are three major catalysts it is banking on that, once in place, could really impact the bottom line and investors perception of Chevron's stock.

Chevrons Australian LNG portfolio coming online
Of all the major projects being developed by Big Oil companies, no one is more reliant on the success of a project than Chevron's on its Australian LNG facilities: Gorgon and Wheatstone. This chart is pretty much sums up how much the Gorgon and Wheatstone LNG facilities mean to the future of Chevron. 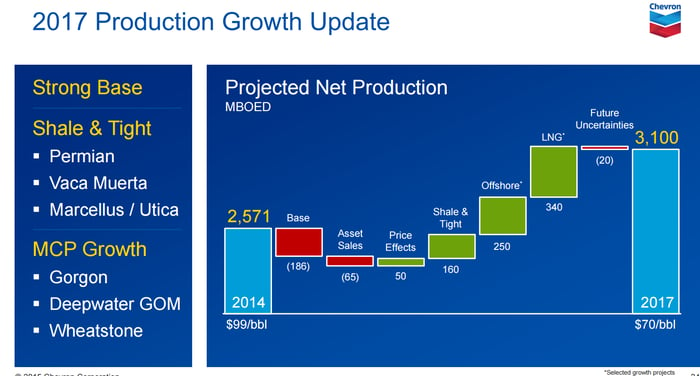 Today, more than 20% of the company's total capital expenditure budget is dedicated to these facilities and carrying the costs of their development for years on the balance has been a major drag on overall capital returns.  Once those facilities come online, though, it will represent a major change in both spending and earnings growth.

Currently, Chevron anticipates that Gorgon will ship its first test cargoes by the end of the year with full ramp up in 2016. Wheatstone is also expected to be up and running by the end of 2016. These facilities have been well behind their original schedule and are billions of dollars over budget. Once they are operational and making a positive impact on the income and cash flow statements, though, chances are investors will forget about some of those issues and start to warm up to Chevron's stock again.

Chevron Phillips Chemical Major Projects
This may not show up as a huge line item in Chevron's income statements, but one thing that will help to boost its earnings in the long run will be its petrochemical manufacturing joint venture with Phillips 66 (NYSE:PSX), Chevron Phillips Chemical -- or CP Chem. Currently, CP Chem is in the midst of building two major chemical manufacturing facilities in the U.S. Gulf Coast that will produce 2.5 million metric tons per year of ethylene and polyethylene.

These are massive projects by themselves, but since Chevron and Phillips 66 let this run as a stand-alone business in which they both have a 50% equity interest, CP Chem's earnings won't have the massive impact on the bottom line like the Gorgon and Wheatstone LNG projects. One thing that is important about CP Chem, though, is that it is a source of profits for Chevron that isn't from oil and gas production. Chevron has historically been a company that is much more tied to oil and gas production than its integrated major peers, and that is part of the reason why its shares have been hit harder this year in comparison. 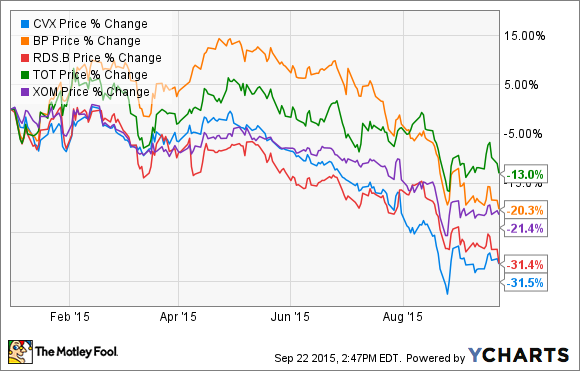 Phillips 66 and Chevron split about $1.4 billion in net income from CP Chem so far this year. Once these two facilities ramp up to full production, though, that should change for the better pretty quick. Even better, CP Chem will provide an income source that actually benefits from lower oil and gas prices.  In the long run, it will make Chevron's combined earnings power more balanced throughout the commodity cycle.

Cash flow neutrality by 2017
A major critique of Chevron's stock from Wall Street analysts has been its cash flow woes. For seven straight quarters, the company hasn't even been able to fund its capital expenditure budget with operational cash flow. So to meet those funding gaps as well as pay a dividend to shareholders, it has sold about $10.8 billion in assets and issued about $13.3 billion in debt.

According to management, the overarching goal of Chevron is to be able to cover both its capital expenditures as well as its dividend payments with cash generated from oprational cash flow. Not a conference call or investor event goes by without management mentioning this nowadays.

The way that the company plans to bring this goal to fruition is through both the winding down of capital spending on major projects like the two above as well as the increased cash that these projects will generate once online.

One of the challenges of this goal, though, is that the projections that the company used to build this goal were based on the price of Brent crude oil at about $70 per barrel. 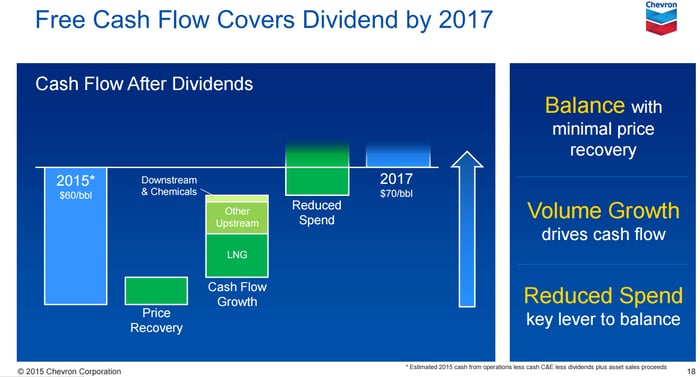 No one can say with any certainly that oil will be at $70 per barrel a couple of years from now. The point is that if prices aren't at that level in a couple of years, then the cash generated from those new sources as well as any gains could be recouped from a price recovery. So, in order to achieve this cash flow neutrality level, it would result in further spending reductions.

If it can reach that cash flow neutrality, though, it will signal that Chevron is on a much more stable footing. Don't be surprised if Wall Street's sentiment toward Chevron's stock changes rapidly if we see this happen.

What a Fool believes
Oil prices and other crises du jour will likely take their toll on Chevron's stock in the near future. There isn't much the company can do about that. However, if it can bring both the Gorgon and Wheatstone facilities online without any more hiccups, add some more downstream earnings though its joint venture with Phillips 66, and get back to cash flow neutrality, then there is a good chance that its recent stock sell-off will be a thing of the past.