While the deal may puzzle the market now, Schlumberger made a shrewd move that has significant long-term consequences to the industry that should drive value.

When oilfield services giant Schlumberger (SLB 3.26%) announced its intent to acquire a non-competitor -- Cameron International (CAM.DL) -- late last month, it left many investors and industry watchers puzzled. Why on earth would the world's largest services company with the best-in-class operating margins within the industry expand itself into an area where it has limited expertise?

Moreover, with the oil industry facing one of the worst downturns in years that is threatening to be longer than anticipated, why is Schlumberger acquiring a struggling manufacturer that would surely cause a drag on its margins initially? Why not go for an acquisition similar to the Halliburton (HAL 2.99%)-Baker Hughes (BHI) deal and consolidate its position at the top?

It's all about value
Looking at Schlumberger's stock prices since the Great Recession could possibly give us a clue: 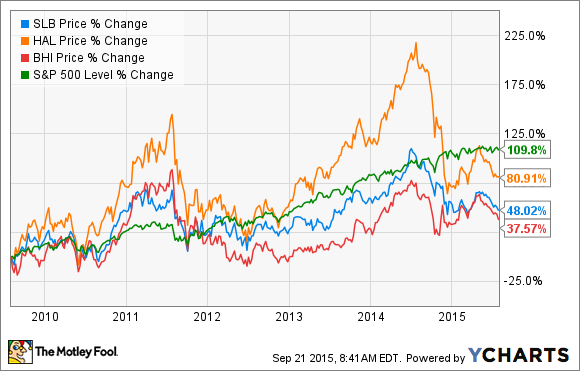 We notice that the Curacao-incorporated company hasn't been able to generate the best returns to shareholders despite delivering superior margins consistently. Instead, Halliburton has significantly outperformed Schlumberger and Baker Hughes, as well as outpaced the S&P 500, for the most part, before the crude oil price collapse put brakes on its runaway share price.

This is how the trailing-12-month gross profit margins compare for the big three in oilfield services within the same period: 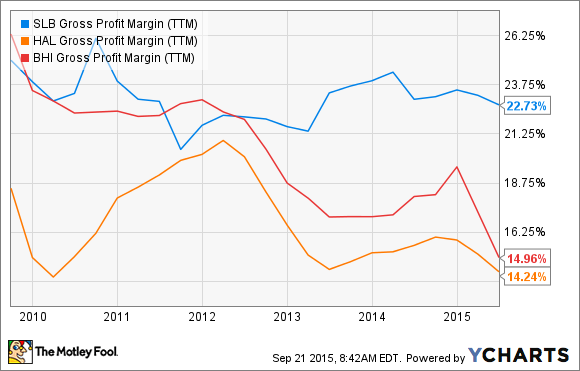 Operating margins don't look much different, either, except for Halliburton's brief stint at the top in 2012: 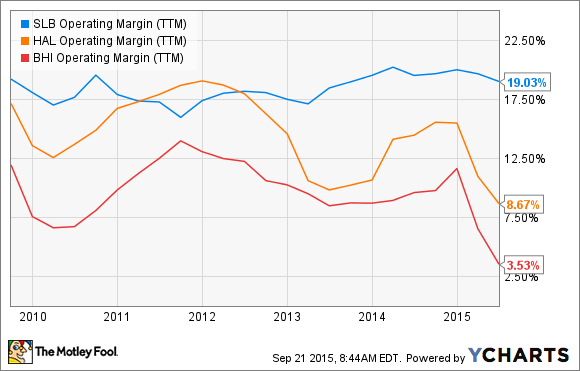 Schlumberger generated superior free cash flow per share, as well, since the recession: 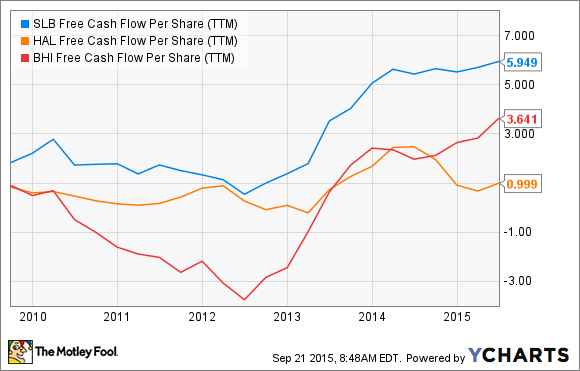 There's only one thing in common: Schlumberger's fundamentals have always been far superior to those of the other two. In short, the greater puzzling question is: Why has Schlumberger's share price trailed Halliburton's despite superior operational performance?

The key to understanding the acquisition of Cameron International -- pending regulatory approval -- could possibly lie in addressing the above question.

A sobering reality: No easy targets
It's not too far-fetched to say that Halliburton sprung a major surprise on Schlumberger last November when it announced its intention to acquire Baker Hughes. With that deal, the combined entity would become the largest oilfield services player in the lucrative North American market pending regulatory approval. With unconventional drilling technologies propelling shale oil production into becoming the fastest-growing segment in the global crude-oil market, Halliburton's undisputed control of the region would mean windfall profits.

Schlumberger's response, however, isn't the usual tit-for-tat. The company, with headquarters in Houston, London, Paris, and The Hague, realizes that the North American market is actually too crowded. For example, the ultra-competitive pressure-pumping market -- a key component in shale drilling -- has actually been the reason behind depressed profit margins for Halliburton, Baker Hughes, C&J Energy Services, and other North American players.

In other words, there wouldn't be much value added if all a company the size of Schlumberger can do is acquire a small oilfield services company in the North American market. Moreover, in terms of sheer operating margins, North America isn't the best region in which to do business. The Middle East-and-Asia and Latin America markets generate far superior operating margins.

A path not well-trodden: Buy a complementary business
Cameron International, on the other hand, operates multiple businesses that are not in competition with the core oilfield services offered by the big three. Instead, the Houston-based Cameron's expertise lies in providing world-class flow control technologies. The company's business can be broadly classified into surface equipment, rig equipment, and subsea equipment, where it's a market leader in each category.

As a matter of fact, Cameron's wellheads are on one-third of the world's accessible producing-wells market, which testifies to its huge global base. Cameron operates across verticals within the oil industry by providing infrastructure for virtually any above-the-surface requirement in the industry.

It may be noted that, by adopting such a strategy, Cameron has avoided crowding within any particular segment, but at the same time, has driven value by maintaining its market-leading position in all broad-based categories. Here's how Cameron's stock has performed during the last 20 years, and you can see how this company left the others in the dust. 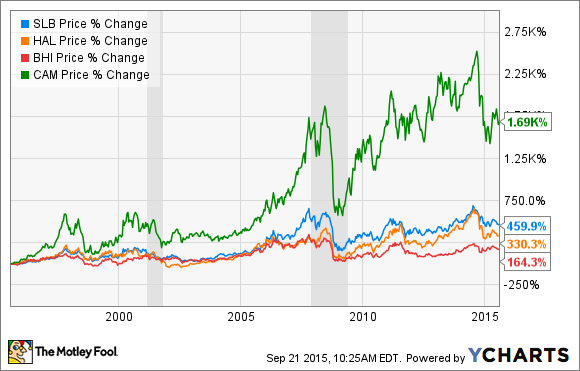 Why acquiring Cameron now makes sense
By acquiring Cameron, Schlumberger is expanding into areas with lesser competition and a wider moat, because Cameron's business model doesn't look easily replicable. By integrating Cameron's product offerings with Schlumberger's unmatched technological advances, there's a greater level of integration on offer to customers that leads to growth, as well as cost savings. 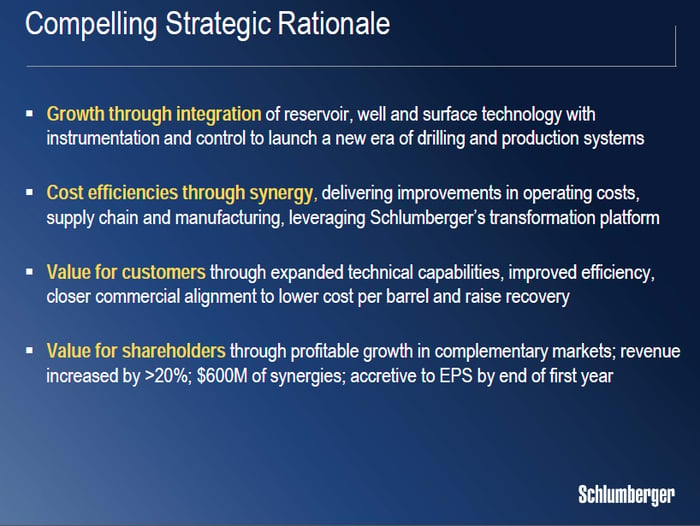 Schlumberger's management aptly termed the merger: "Surface and subsurface integration -- the next chapter of our growth" -- highlighting that cost savings to customers are going to be pretty significant post-merger. This is an unprecedented level of integration on offer that customers have never experienced before, which helps them improve on efficiencies by lowering per-barrel costs and increasing oil recovery rates. Could this also help Schlumberger eventually eat into the market share of its North American competitors -- including the Halliburton-Baker Hughes combination -- due to its superior product offering?

The first three points in the above chart -- growing through integration, cost efficiencies through synergies, and value for customers -- all look compelling and would realistically help Schlumberger drive growth.

Cameron's subsea division is another compelling reason
Another reason for the acquisition is Cameron's leading position in the subsea equipment market. While global oil prices are depressed, subsea businesses don't make a lot of sense. However, in the next 20 to 30 years, frontier oil production from offshore sites will be significantly driving oil production.

Keeping that in sight, Schlumberger has probably acquired Cameron at a very cheap price -- at arguably the lowest point of the business cycle. Schlumberger could use the next few years integrating and building its own expertise in subsea production systems.

Foolish bottom line
One of Schlumberger's core philosophies is to identify opportunities and drive value through "the evolution of individual hardware components into integrated systems," thereby setting new industry standards. Until now, the company was focusing on integrating subsurface systems, and it has been hugely successful. Now the company is setting its sights on the huge potential in integrating subsurface systems with above-the-surface structures.