It may finally be time to buy bank stocks
A bank's primary business is accepting customer deposits and making loans. Banks pay depositors a bit of interest for keeping their cash at the bank, and then they invest in loans that yield a higher interest rate. The difference between a bank's interest expense and interest revenue is called its net interest income.

When rates rise, interest income tends to rise faster than interest expense. This happens for a variety of reasons.

Many deposit accounts do not pay any interest at all, meaning that there's no increase in expense no matter how high rates may rise. Banks also have control over the pricing they offer on their deposit products that do pay interest. Many banks will elect to raise the interest on deposit products more slowly than the Fed raises market rates.

In addition, banks utilize funding from institutional investors to supplement their deposit base; those funds are typically structured in a way to minimize the effects of interest rate changes. Most banks also use derivative contracts called interest rate swaps to stabilize their interest expense even further.

On the loan side, banks will raise their loan prices as soon as they possibly can. All new loans will take advantage of the highest rate the market will allow.

For existing loans already on the books, variable rate loans will be the driver of higher yields. Many business loans are tied to short-term market rates like LIBOR or the WSJ Prime Rate, meaning that interest income could start rising on those loans almost simultaneously with a Federal Reserve announcement. Variable rate mortgage and commercial real estate loans will take longer to reprice, but over a two- to five-year period, the bank should still see a material increase in income from these existing loans as well. 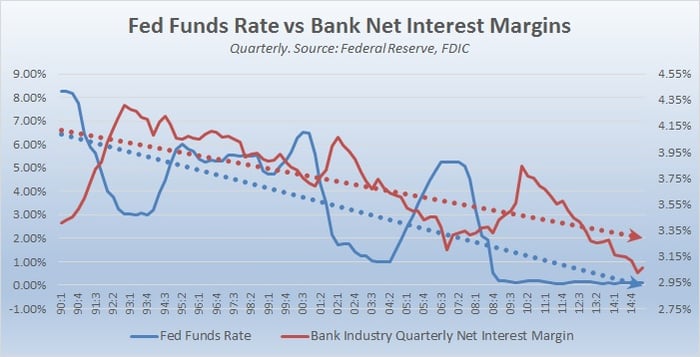 Rising interest rates over this time frame will almost certainly cause a surge in bank profits, driven by higher net interest income. If you choose to pursue a bank stock to hedge against rising interest rates, it pays to put your money into the highest-quality banks -- those with a track record of success in all phases of the credit cycle. Two of my personal favorites are First Republic Bank and JPMorgan Chase. You can read my thoughts on each here and here, respectively.

Other financial firms stand to gain as well
In addition to banks, asset managers also stand to benefit from a higher interest rate environment. Those companies with large money market fund assets particularly so.

With interest rates as low as they've been over the past few years, many managers have been waiving fees on money market accounts to keep the funds' yields above zero. The problem is that the money market account returns are largely tied to short-term loans in the commercial paper market. Yields on those loans are near zero in today's environment, which translates to near-zero returns for money market funds.

If asset managers were to charge their typical management fees on the assets in the funds, that extra cost would push the returns from near zero to below zero.

Instead of doing that, asset managers elected to waive those fees in order to keep investors from abandoning the funds for other vehicles with positive -- even if tiny -- yields. When rates rise though, these companies will be able to start charging these fees once again.

According to a report by The Wall Street Journal, the asset management industry waived an estimated $6.3 billion in these fees in 2014 alone. The industry has waived at least $4 billion every year since 2010.

Charles Schwab (SCHW 2.57%) is a great example of this. As of August 31, Schwab managed about $161 billion in money market funds.

Schwab is still incurring all the expenses for running these funds, which means any rise in fees should flow directly to net income. Net income was $1.3 billion in 2014. In that context, it's clear how significant this revenue stream can be for Schwab and others. This alone represents major upside for earnings across the asset management industry.

Charles Schwab is more than just money market funds
Much like a bank, Schwab also manages client cash on its balance sheet, reinvesting it in higher-yielding investments. The resulting spread is not unlike the net interest income concept so critical to traditional banks.

In 2008, Schwab's net interest margin -- a metric that measures the net interest income in relative terms -- was 3.84%. By 2014, Schwab reported a spread of just 1.64%. Over that six-year period, the company more than doubled its client assets under management, but because of the historically narrow net interest margins, its revenue has lagged substantially. 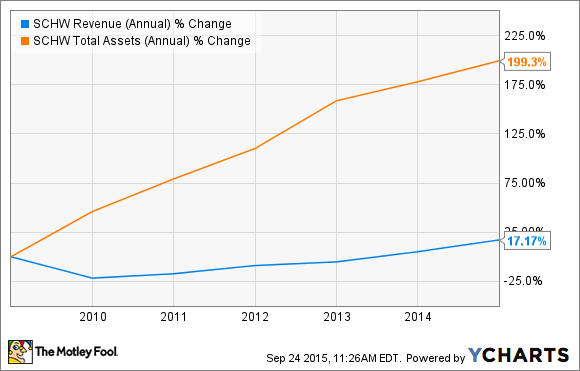 When interest rates rise the spread will grow, propelling revenue higher, in essence catching up with the increase in assets. In this way, Schwab represents both the upside of higher-spread banking as well as the opportunity for money market fund managers.

Uncertainty remains, but you can still prepare your portfolio
Many thought the Fed would raise rates at their September meeting. Instead, the Federal Open Market Committee opted to postpone any rise in rates for now. Most observers still expect the Fed to begin increasing rates either later this year or early in 2016, but it's impossible to predict with certainty.

If you're concerned with how this change in policy will impact your stock portfolio, consider taking a look at companies that stand to benefit from rising rates. To me, high-quality bank and financial services stocks are a great place to start.