Please ensure Javascript is enabled for purposes of website accessibility
Log In Help Join The Motley Fool
Free Article Join Over 1 Million Premium Members And Get More In-Depth Stock Guidance and Research
By Rich Duprey - Sep 26, 2015 at 9:19AM

Even though its fortunes have taken a turn for the worse lately, this department store chain has managed to strike a chord with consumers.

J.C. Penney has staged a remarkable recovery as it's wooed back shoppers who left it for competitors, but not even this wunderkind is rated tops among department stores by consumers.

The dramatic fall and rise of J.C. Penney (JCPN.Q) will be the stuff of business marketing classes for years to come because of how close it came to going over the precipice.

Customers who fled after its former CEO sought to transform the department store into a modern and tech-savvy retailer have returned in droves after most of the changes were undone. Revenues are rising, it's forecasting it will break even on free cash flow this year, and J.C. Penney could produce as much as $1.2 billion in earnings before interest, taxes, depreciation, and amortization by 2017.

Still, as popular as J.C. Penney has once again become, consumers have a different department store in mind when they think about their favorite place to shop.

According to Nielsen's Harris Poll EquiTrend rankings for 2015, which measure the connections brands make with consumers across elements like familiarity, quality, and purchase consideration, J.C. Penney was one chain that didn't rise above the industry average.

No, the department store that came out on top is one that has been beaten down by investors this year, having lost 18% of its value so far in 2015, meaning its selection as Brand of the Year just might surprise you.

Each year, Harris Poll analyzes the opinions of some 38,000 consumers on how they feel about 1,400 brands in more than 148 different industries. It breaks down the responses to its survey to derive what it calls an Equity score that provides a "snapshot of a brand's strength." Those that score the highest in their respective niches are deemed the Brands of the Year.

The thinking behind the methodology is that a higher-ranking brand will perform better financially in relation to returns, stock volatility, and beta, or a stock's riskiness. So, while J.C. Penney has seen comparable-store sales turn positive -- suggesting consumers have a high opinion of the value and quality of the brand -- it's not necessarily enough to overcome the attributes that accrue to higher-ranking chains.

So, which company came out on top? If you guessed Macy's (M -6.20%), good shot, but it was actually second to Kohl's (KSS -12.97%), which has been the department store consumer choice for four years running now, consistently besting its rivals.

Is there something to the rankings and the financial performance of department store chains? Looking at their stocks over the past two years, there just might be a predictive quality to it, as Harris Poll assumes. Although Dillard's has done surprisingly well considering, like Penney's and Sears, it too regularly falls below the industry average. Kohl's and Macy's, on the other hand, have done quite well for themselves. 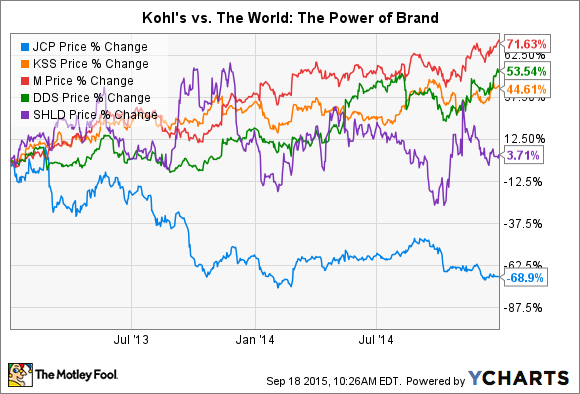 Kohl's may be the perennial consumer favorite in part because of the heavy discounts it offers on brand names. This past quarter, Kohl's reported that even though overall revenues didn't live up to internal expectations, its national brands still experienced significant growth, jumping approximately 6% higher as penetration increased above 250 basis points.

According to Harris Poll, "Brands that build and keep their promise over time -- and develop strong differentiation -- stay relevant for the long term."

Kohl's has been the perennial favorite of consumers when it comes to department stores.

That would certainly seem to apply to Kohl's, which, despite its struggles in more recent periods, has maintained a level of consistency with consumers.

But it's curious that this year it is J.C. Penney that's outperforming Kohl's and Macy's in the stock market. Where the stocks of the latter two have lost about 15% each this year, J.C. Penney has gained 50%, suggesting there may be an upset in the making for next year's polls.

That might be proper considering Penney has gone out of its way to reinstate the strategies its customers loved, but were jettisoned by former CEO Ron Johnson's attempted extreme makeover.

There is always room for endless debate about which retailer is a favorite among consumers and why, but investors may want to consider how they've voted with their pocketbooks. And though the past is not a guarantee of future performance, if consumers are saying Kohl's is their top-ranked department store brand, it may be a data point worth considering.