Since Aug. 17, the market has been going a bit crazy. Fears about Chinese growth, interest rates, and more have whipsawed prices dramatically lower, then higher, and the lower again.

The uncertainty has spooked many investors. But Warren Buffett isn't most investors. He's the Oracle of Omaha, and he spent his August buying.

How'd you spend your summer?
In an interview on CNBC, Buffett said that Berkshire Hathaway (BRK.A 0.73%) (BRK.B 0.75%), the company where he is both chairman and CEO, invested about $500 million during this period of intense market volatility.

Buffett is a value investor, meaning he seeks to find companies that trade at valuations below what they're intrinsically worth. Generally, Buffett buys stocks with a long term investment horizon, which together with his value-based approach makes short-term market volatility a great opportunity to buy high-quality stocks on the cheap. 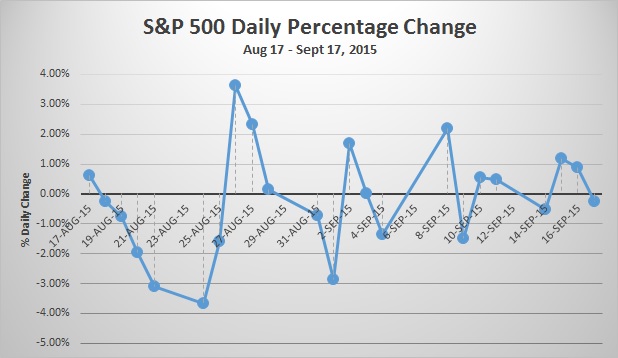 What is he buying?
We won't know all of the stocks Berkshire Hathaway has been buying until the company files its third quarter holdings with regulators in October or November. However, Buffett did point to at least one stock the company has been buying: IBM.

Berkshire first began buying IBM shares in 2011 and has been steadily increasing its position since. Berkshire owned just over 79 million shares in Big Blue as of June 30.

The company is currently in a transitional period, as CEO Ginni Rometty sells off the business' low-margin hardware businesses and seeks to expand into higher-margin software and service based offerings. That transition has put pressure on IBM's top line; revenues have dipped substantially since 2012.

From Buffett's perspective, the challenges of this transition will ultimately pay dividends for the company -- and its stock price. Buffett said that Berkshire is buying shares today "because we like what we're buying in relation to its long-term prospects."

IBM's stock is down about 7% since the market volatility began on Aug. 17.

More big purchases coming.
Earlier this year, Berkshire announced its largest acquisition ever, the $37 billion deal to acquire Precision Castparts. That was followed by the purchase of $4.5 billion worth of stock in Phillips 66.

Both of these deals fall under Buffett's definition of "elephant hunting," when Berkshire goes shopping for large businesses where he can invest huge chunks of cash at a single time.

Berkshire can afford to go elephant hunting thanks to is massive stockpile of cash. The company reported cash and equivalents of over $66 billion at the end of the second quarter. Buffett has stated his intention to maintain at least $20 billion in cash available at all times, meaning he has over $45 billion to put to work. 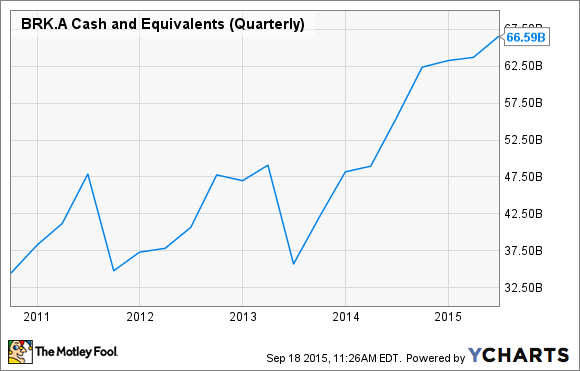 The elephant hunting strategy isn't really possible for the everyday investor, and neither the Precision Castparts nor Phillips 66 purchases occurred during August's up and down market. However, Buffett's moves are still indicative of his view of the markets today.

August's volatility is not as significant in terms of a 10- or 15-year investment as it is when only considering the next few weeks or months. That creates opportunity for long-term value investors. Buffett views cheaper prices in the short term as a chance to buy for the long term, and that's exactly what he's doing.

What does all this tell us?
Yes, the markets have been tough over the past month or two. The Chinese economy isn't growing as fast as it once did. No one is certain what will happen with interest rates. The uncertainty driving the market's volatility is real.

In spite of these concerns, Buffett's actions carry a clear message. He sees quality companies well positioned to thrive over the long term. And prices are much cheaper now than they were a few short weeks ago.