The Fed's first post-crisis rate hike will happen. Here are five trends to watch once it does.

Financial markets were on tenterhooks last week waiting to see whether Fed policymakers would lift rates for the first time in the post-crisis era. As it turned out, the central bank opted to stand pat, citing heightened risks and uncertainty in the global economy. It now looks like the December FOMC meeting is the earliest time at which the Fed might raise rates. So the wait continues, giving investors more time to ponder all the things that might happen once the rate hike finally occurs. We asked our analysts, who identified five things worth watching when it does.

Alex Dumortier: Between China's economic slowdown and the (related) slump in commodities prices, emerging market economies have had a rough go of it recently. That's visible in the foreign exchange market, with currency exchange rates against the dollar currently plumbing depths not seen since 2002 (take the Brazilian real, for example).

Or witness the year-to-date performance of the iShares MSCI Emerging Markets ETF relative to the S&P 500: 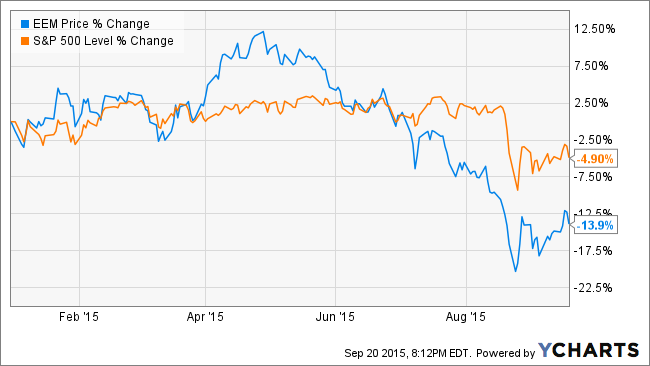 But there is another factor analysts and economists are concerned about: The potential impact of rising U.S. interest rates.

This month, the World Bank published a 71-page report on this very topic, titled "The Coming US Interest Rate Tightening Cycle: Smooth Sailing or Stormy Waters?" The authors don't mince words when it comes to their worst-case scenario:

Global financial market volatility could combine with underlying weakness into a "perfect storm" in some EFEs [emerging and frontier market economies], in particular those that need to adjust to the prospects of persistently low commodity prices and tighter financial conditions, or that face domestic policy uncertainty against the backdrop of lingering vulnerabilities and weaker growth.

Still, their base case is a lot less alarming:

The tightening cycle is expected to proceed smoothly since it has long been anticipated and it will most likely evolve very gradually.

I tend to agree and think this rate hike will likely be the economic equivalent of getting an injection: The anticipation is far worse than the event itself (in fact, several emerging market central bank governors have publicly urged the Fed to perform a "lift-off" sooner rather than later to end the uncertainty).

The risks to emerging markets loom large today, but they could be obscuring a long-term opportunity in the process. I think there are good odds that a decade from now, we'll look back and see this was a good time to buy emerging market equities -- I wouldn't be at all surprised if they outperform the S&P 500 over that period.

Sean Williams: While the most common inclination with interest rates set to rise at some point in the near to intermediate future is to worry about the U.S. housing market, I believe the bigger concern is if merger and acquisition activity grinds to a halt when rates begin rising.

M&A activity is typically viewed as a positive since it means companies are willing to take on the added risk of paying a premium for another business. The only logical reason to do this is if the purchasing company believes it has a promising long-term outlook, and the combination of the two businesses will result in improved profitability. Within the biotech sector, we've witnessed nearly $271 billion in deals this year through mid-August. For added context, $277 billion is the record... for a full year! It demonstrates that M&A activity has been extremely strong.

However, if rates begin to rise, it could remove access to the cheap capital that's being used to complete these deals. Some companies have ample cash on hand to make deals happen or they can choose to go the route of a cash and stock deal. But in instances where companies finance their purchase with a loan, higher lending rates could make the buyout process less lucrative.

To be clear, I don't suspect a quarter point here or there will be all too noticeable on the M&A landscape. But as we move 100 or 200 basis points higher in the years ahead, we could see M&A activity shrink. For industries that tend to be reliant on M&A -- Big Pharma, water utilities, and 3D printing -- this could be a problem.

Jason Hall: I think for the vast majority of us there's very little we really need to watch. Yes, there are things that will happen in the short term, such as bond values dropping when rates tick up, since new bonds will pay higher rates than existing issues. There could also be some impact on dividend stocks, as bonds will start to become more competitive for income investors. Besides limiting exposure to bond funds (read Dan Caplinger's contribution below), it's not really something we need to spend a lot of time thinking about or worrying over.

To start, the Fed is pretty much guaranteed to increase rates slowly over several years and only based on the economy being relatively strong. Second, because rates are at historically low levels, the economy should be able to absorb the hikes with minimal impact on things like home and auto sales.

Think about it this way: The 30-year mortgage rate would have to almost double to reach its level in the 1990s and triple to get to the super-high inflation-driven rates of the mid- 1980s: 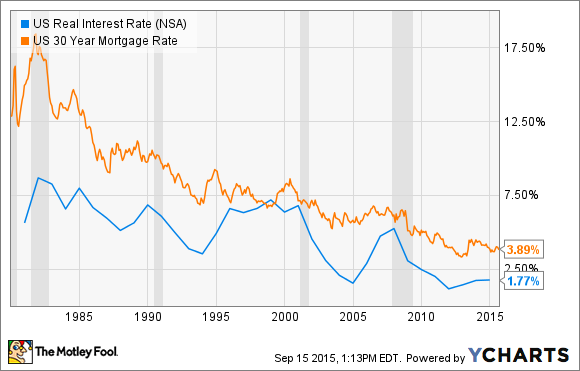 Rates have been mostly falling for 35 years. They're likely to start a steady climb back up to some level soon. Most of us shouldn't pay much attention to it, since it's only likely to happen if the economy and outlook remain strong.

Dan Caplinger: When interest rates rise, many investors discover for the very first time that the investments they have in bond mutual funds and exchange-traded funds can go down in value. The reason is that when rates go up, the prices of existing bonds go down, because newly issued bonds in the credit markets carry higher interest rates that make older bonds look less attractive by comparison.

By the time these losses show up on their quarterly statements, it's often too late for casual investors. Yet that doesn't stop them from selling after they've suffered those price declines, and the resulting selling pressure can make bond prices fall even further. Interestingly, that movement can sometimes help the stock market, especially if stocks perform better than bonds during that initial period and therefore sport higher historical returns when investors are looking for alternatives for their bond-fund sales proceeds. Sometimes, though, those shifts into the stock market come at exactly the worst time, giving investors a second loss when stocks go through a correction.

The better course is to accept that markets rise and fall and stick with an acceptable allocation between stocks, bonds, and other investments. You'll sometimes suffer declines with this method, but you'll avoid some of the whipsaws that those who try to time the stock and bond markets end up facing.

First, this investment category has become increasingly popular due to years of near zero interest rates, as yield-starved investors went hunting for someplace to earn a generous return on their money. As rates slowly normalize, that relative need will diminish and money may flow out of this equity type.

Second, MLPs are a capital-intensive business, especially because they retain so little of their earnings and instead distribute the money to investors. That means they need to tap debt and equity markets to raise growth capital and higher interest rates will likely mean higher costs of capital and potentially weaker margins.

That being said, for the larger and more diversified blue chips in this segment, higher rates aren't necessarily bad. For example, back in April, Kinder Morgan's founder and executive chairman, Richard Kinder, pointed out that low interest rates and a flood of cheap money was actually hurting his company's ability to buy attractively priced mid-stream assets from distressed oil producers:

There's just a lot of very cheap money flowing into the energy segment particularly on the upstream area that's backing companies that otherwise might be more in need of selling midstream assets that we would be interested in if they didn't have some of this capital.

Plains All American Pipeline Chairman and CEO Greg Armstrong, during the MLP's most recent conference call, similarly mentioned that Plains had bid on 20 to 30 attractive buyout targets but found themselves outbid by 30%-50% due to competitors having access to an excess of cheap capital.