Earnings results from one of the world's biggest retailers and a closely watched economic report could set the tone for stocks as we close the books on the third quarter.

Markets are limping into the final quarter of the year: The S&P 500 (^GSPC 2.47%) and Dow Jones Industrial Average (^DJI 1.76%) sit at 6% and 9% below where they started 2015, respectively. Most of that drop happened in the last few weeks of August, but September hasn't been easy on investors either. Both indices are down roughly 2% this month. 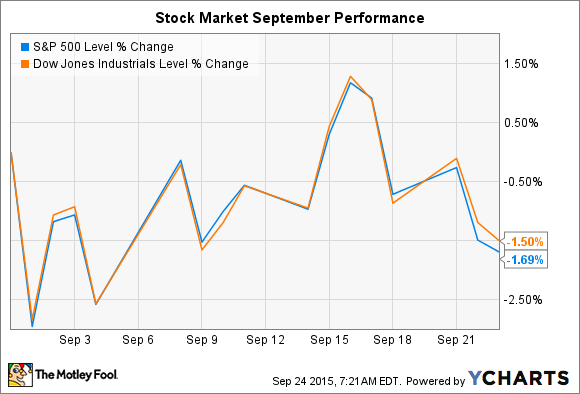 There are important earnings reports on tap this week, including one from the nation's second largest retailer. Meanwhile, major economic news on Friday could move markets as it informs the Federal Reserve's upcoming decision on when to finally pull the trigger on raising interest rates.

Monday, Sept. 28 -- Soaring egg profits
But first let's talk about eggs. Cal-Main (CALM 2.71%), the country's largest egg producer, will post quarterly earnings results before the market opens on Monday. Its stock is having a great year so far, up 45% since January and near a record high heading into the quarterly report.

The reason for that bounce can be found on your latest supermarket receipt. That is, the country has been going through an unprecedented spike in egg costs these past few months. A bird flu outbreak has slashed the population of egg-laying hens, and so egg prices at grocery stores have been running at more than twice their normal level since June. 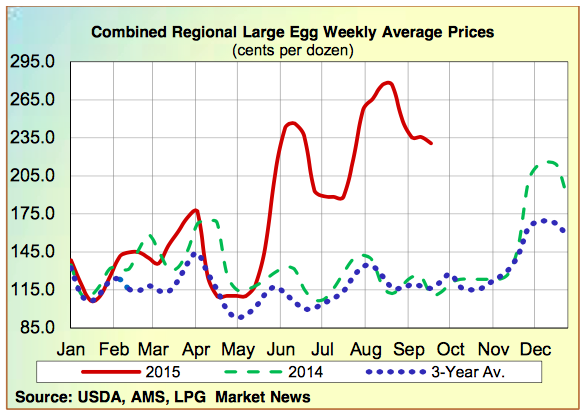 Wall Street expects that spike to help push Cal-Main's Q3 profits up by more than 400% to $3.14 share from last year's $0.57 per share haul. Analysts have been tripping over themselves to raise their profit forecasts over the last 90 days: Three months ago the pros were targeting $2.68 per share in Q3 earnings.

Tuesday, Sept. 29 -- Bulk earnings
Next up, warehouse giant Costco (COST 1.24%) posts earnings results on Tuesday. The nation's second biggest retailer (behind Wal-Mart) is expected to announce relatively weak headline numbers, with sales up a meager 2%. Profit should only tick higher by 5%, compared to an 18% earnings jump through the prior nine months.

However, with gas prices and currency exchange rate swings acting as temporary drags on headline results, investors should instead focus on Costco's adjusted comparable-store sales growth figure. That number was a healthy 6% last quarter, versus the unadjusted -1%. Most national retailers are having trouble booking much above 2% growth these days, which is why comps growth of 5% or higher is likely to keep Costco safely on top of the retailing industry.

Meanwhile, updates on the retailer's store expansion plans could move the stock in the wake of this report. Costco likely finished its fiscal year with 24 new warehouses, but could project opening well over 30 stores in FY 2016. Management might also have something to say about an upcoming subscription fee hike given that the annual charge hasn't budged in years. Since membership fees are the main engine of its profits for Costco, any increase will likely significantly boost the earnings outlook.

Friday, Oct. 2 -- Employment situation report
Before the market opens on Friday, the U.S. Bureau of Labor Statistics will release its monthly reading on job growth and unemployment. September's version of this closely followed report showed a payroll increase of 173,000 as the unemployment rate edged down to 5.1%. Prior months' gains were also revised higher, suggesting continued solid improvement on the jobs front. 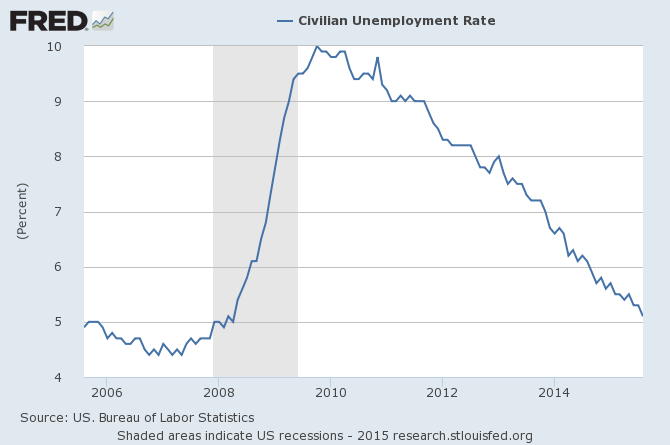 Expectations are for the unemployment rate to stay at 5.1% for the month of September. Source Federal Reserve Economic Data.

Economists expect this week's report to show more steady growth; payrolls are targeted to improve by 190,000 as the unemployment rate stays at 5.1%. Any big deviation from those numbers could move the market, particularly as the Federal Reserve, according to its latest policy statement, is waiting for "some further improvement in the labor market" before it decides to raise long-term interest rates.