Please ensure Javascript is enabled for purposes of website accessibility
Log In Help Join The Motley Fool
Free Article Join Over 1 Million Premium Members And Get More In-Depth Stock Guidance and Research
By Ashraf Eassa - Sep 28, 2015 at 9:00AM

As far as gaming laptops go, NVIDIA is miles ahead of its rival, Advanced Micro Devices.

In the market for stand-alone graphics processors, there are two principal players: NVIDIA (NVDA 5.38%) and Advanced Micro Devices (AMD 3.55%). NVIDIA is the market share leader and AMD is the underdog.

Although AMD fairly recently refreshed its desktop graphics processor lineup which, according to MKM Partners' Ian Ing, has led AMD to start clawing back market segment share in desktop graphics cards priced at $200 and $400, there is one area where NVIDIA continues to have an overwhelming lead over AMD: gaming laptops.

Gaming is increasingly going mobile, and NVIDIA has clear leadership
High-end PC gaming has traditionally been the domain of desktop PCs. However, gaming has been "going mobile" as it has become more feasible to put very fast processors and graphics cards into smaller, more thermally constrained laptops.

Indeed, according to NVIDIA in a recent investor presentation, the market for gaming notebooks has been growing quickly, dramatically outgrowing the overall notebook market. 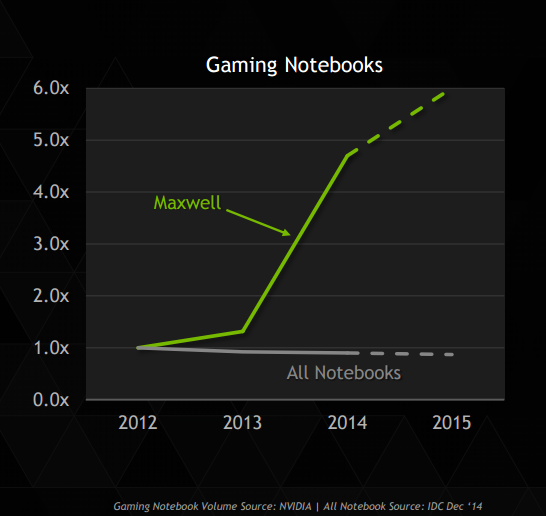 So, how do I know that NVIDIA has a substantial lead over AMD in gaming notebooks? It's quite simple, actually.

What happens when one tries to buy a gaming laptop?
The easiest way to see the overwhelming lead that NVIDIA has over AMD in gaming notebooks is to actually go and try to buy one.

When I went to Newegg.com gaming laptop page in order to start my search for a new gaming laptop, I saw the following: 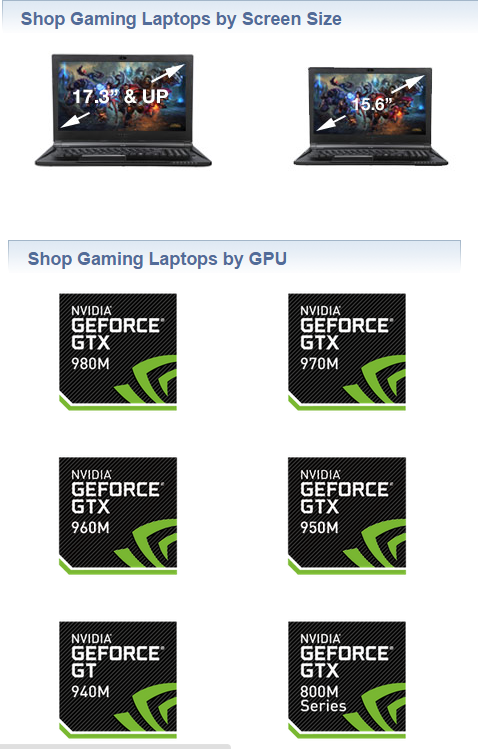 It's not surprising that Newegg would have customers search for gaming laptops based on the kind of graphics chip that's inside; after all, the graphics chip is by far the biggest determinant of gaming performance in a computer.

What I did find a little surprising, however, is that all of the options on the gaming laptop landing page are NVIDIA based.

Even more surprising was that when dug a little deeper to see what AMD-powered options Newegg.com did have, I found just one: a refurbished laptop with an Ultrabook-class dual core CPU and a relatively weak Radeon R9 M275 discrete graphics processor.

Can NVIDIA keep this winning streak up?
A key question for both NVIDIA and AMD investors is whether the former will be able to maintain its product power efficiency lead over the latter. If NVIDIA can maintain this efficiency lead, then I'd expect it to continue to have overwhelming share of the GPUs sold into gaming laptops. If AMD is able to close the gap, then it could start regaining share.

I also agree with fellow Fool Timothy Green in that AMD likely "doesn't have the resources to keep up with NVIDIA."

Indeed, NVIDIA's research and development budget is now significantly greater than AMD's, even though AMD is trying to build products for a much broader set of end markets than NVIDIA does: 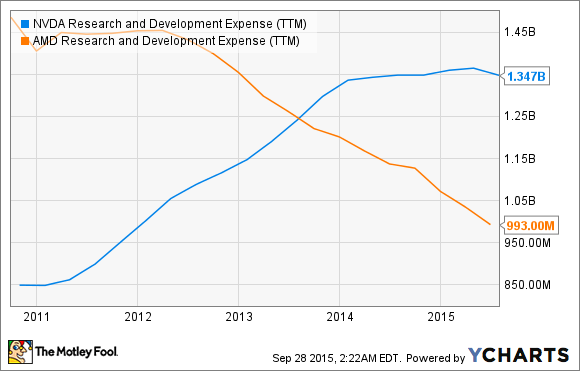 This seems to suggest that NVIDIA is spending materially more on graphics technology development than AMD is, which I suspect will translate into superior products from NVIDIA going forward. If that turns out to be the case, then NVIDIA should be able to maintain its high level of share in gaming notebooks -- as well as in the broader stand-alone graphics chip market -- going forward.