Please ensure Javascript is enabled for purposes of website accessibility
Log In Help Join The Motley Fool
Free Article Join Over 1 Million Premium Members And Get More In-Depth Stock Guidance and Research
By Matthew Frankel, CFP® - Sep 28, 2015 at 6:47AM

Warren Buffett is paying $37.2 billion to acquire Precision Castparts at a "very high multiple." Here's why it's a good move, and what you can learn from it.

In August, it was announced that Warren Buffett's Berkshire Hathaway (BRK.B 4.02%) (BRK.A 3.75%) had agreed to buy Precision Castparts (PCP.DL) in a deal valuing the company at $37.2 billion. At first glance, the deal may seem uncharacteristic of Buffett: Not only is this the single most-expensive purchase he's ever made, but he's admittedly paying a high valuation multiple for the company, which may seem odd since Buffett is known as a master of "buy low, sell high." However, Buffett had some good reasons for making the deal, and we can learn some valuable investing lessons from it.

The deal, and what Precision Castparts does
Precision Castparts produces various specialized parts, such as castings, forged components, and pipe fittings. The majority of its revenue -- 72% -- comes from the aerospace industry, with the rest coming from energy companies and other industrial customers.

The company has grown impressively during the past decade, both organically and through acquisitions. And profits have grown nicely, as well. 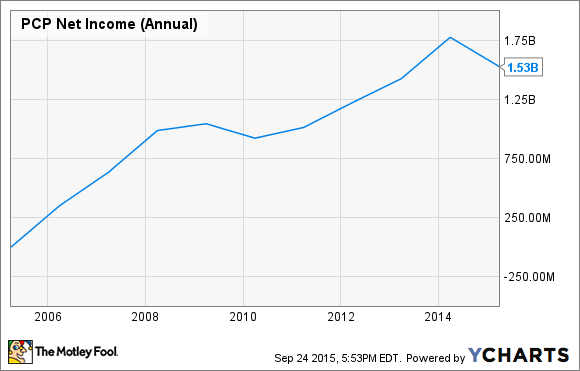 Berkshire is paying $235 per share for the company, which is roughly a 21% premium to Precision Castparts' share price before the announcement. Additionally, Berkshire is assuming the company's existing debt, which values the deal at a total of $37.2 billion.

Buffett certainly isn't getting a wonderful price for Precision Castparts. Buffett himself said that the deal was at a "very high multiple for us to pay," and that it is "right up there at the top" in terms of valuation. At the price Buffett is willing to pay, Precision Castparts trades for 18.6 times forward earnings, which is certainly on the high-end for Buffett's investments.

Clearly, Buffett thinks that Precision Castparts is a great business. The company's net income margin has averaged more than 15% during the past decade, and it remained profitable no matter what the economy was doing. In fact, in the aftermath of the financial crisis, there has only been one year (2010) when the company's profits dropped, as you can see in the chart above. Since that time, it has rebounded -- and then some.

And he also feels that $235 per share is a fair price to pay. Sure, this represents a hefty premium to where the stock was trading before the announcement; but the market had been beaten down quite a bit in the months leading up to that. Precision Castparts was actually down about 20% for the year at that point, thanks to its exposure to the energy industry.

However, the airline industry is booming, and Buffett feels that paying 18.6 times forward earnings for a company that has grown its earnings at an average annual rate of 18% during the past decade is an attractive deal. In a nutshell, Buffett didn't scoop up Precision Castparts at a fire-sale price the way Carl Icahn recently bought Freeport McMoran, or the way Bill Ackman bought Fannie Mae for pennies on the dollar of its former value; but that doesn't mean he overpaid. Quite the opposite, actually.

A wide moat justifies a steeper price
"Wide moat" is actually the first term I think of whenever Warren Buffett's investing style is mentioned. Basically, it refers to the sustainable competitive advantages that should allow a business to thrive for decades to come. Just to name a few of Buffett's stocks and their particular wide moats:

As far as the Precision Castparts deal goes, the company uses complex, proprietary technologies to make its products. And because of the specialized nature of many of its products and the high costs associated with the aerospace industry, the market has high barriers to entry for would-be competitors. Further adding to the company's wide moat is its excellent relationships with the world's largest aerospace companies, many of which produce lucrative parts orders. For example, every time Boeing builds one of its new 787 Dreamliner aircraft, Precision Castparts makes about $1.5 million.

Apply these to your own portfolio
These are two great investing lessons that can help you construct a rock-solid portfolio of stocks that will produce growth and income for decades to come. Next time you're getting ready to invest, ask yourself these three questions about the stocks you're looking at:

If you can confidently answer yes to all three, the stock could be a solid long-term investment for you.