Please ensure Javascript is enabled for purposes of website accessibility
Log In Help Join The Motley Fool
Free Article Join Over 1 Million Premium Members And Get More In-Depth Stock Guidance and Research
By Tyler Crowe - Sep 28, 2015 at 8:15AM

The lifting of sanctions in Russia, the on-budget development of the Shah Deniz gas field, and putting its huge cash pile to work could go a long way in erasing the decade-long slide in BP's stock price.

If you've been a BP (BP -0.26%) stockholder for a while, the market has not been kind to you. Over the past 10 years, the combination of the financial crisis, the Deepwater Horizon, and the recent decline in oil prices has resulted in a total loss of principle greater than one-third, even after dividend payments. Results like this are extremely discouraging for what has historically been one of the five largest publicly traded oil and gas companies. 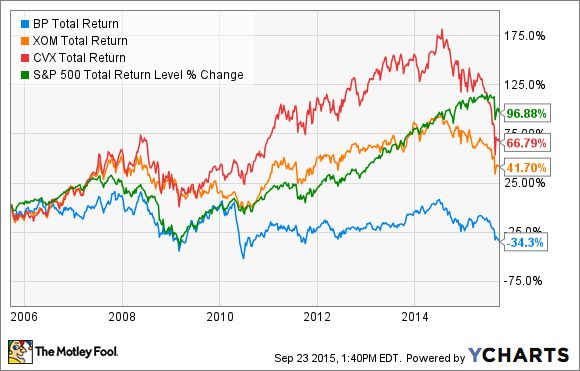 Much of that is in the past, though. The question is now how BP can move forward from here and start to generate positive long-term returns for its shareholders. With that in mind, here are three major catalysts on the horizon that could go a long way in sustainably boosting BP's stock price. 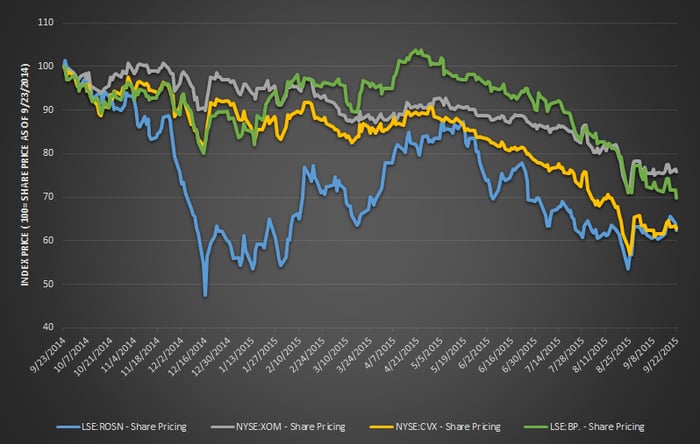 The reason this means so much to BP is that the company has a nearly 20% equity stake in Rosneft on top of several joint venture projects with the company that drive a significant amount of BP's production. Of even greater concern is BP's resource potential in Russia. The 62 billion barrels of proven reserves and potential offshore resources is second to only ExxonMobil's (XOM 0.54%) and will probably be a huge source of production in the future. 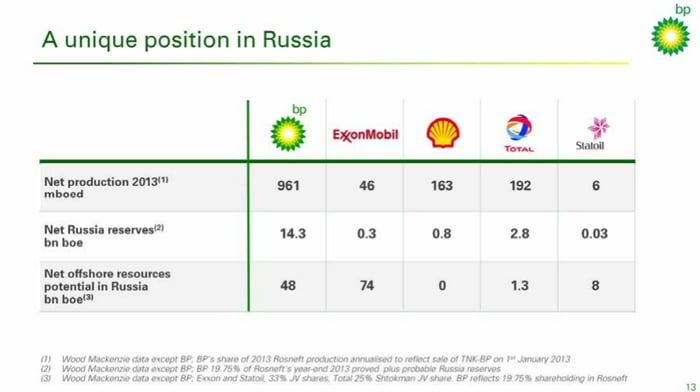 The current sanctions severely restrict the use of new technology to access deepwater reserves off Russia's shores and its several billion barrels worth of potential shale and tight oil. This is leaving many of these potential resources undeveloped, affecting the bottom line for Rosneft and, by default, BP. If sanctions were lifted, it would allow BP and other Western companies to do technology transfers with their Russian partners and put the development wheels in motions. Considering how much of BP's future is tied up here, the lifting of sanctions could go a long way in lifting BP's stock price for years to come.

Getting the Shah Deniz project right from the get go
Just about every integrated oil and gas company has that one project in the works that ties up loads of capital and can strain the finances of these giants. For ExxonMobil it's the company's half-dozen oil sands and bitumen projects. For Chevron (CVX -0.71%) its the Grogon and Wheatstone LNG projects. In BP's case, that one project that it needs to get right is the second phase development of the Shah Deniz gas field in the Caucus Sea.

Once completed, the new facility will more than double its current production capacity to around 600,000 barrels of oil equivalent per day, although most of that will be natural gas delivered to continental Europe. Even more impressive is the duration of the project. BP estimates that the Shah Deniz field development will generate production well beyond 2047. 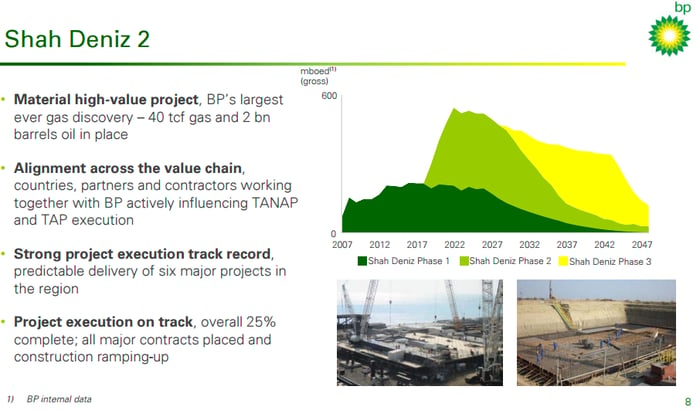 BP estimates that the total cost of this project, which includes the pipelines needed to deliver gas to Europe, will cost somewhere in the $28 billion range. To put that into perspective, the capital needed to build this project is equal to 37% of the company's total enterprise value -- market capitalization plus net debt.

Shah Deniz phase 2 isn't expected to start production until 2017-2018 and not ramp up to full production until a couple years following. Until it does, that $28 billion in project spending will be a big drag on overall returns and will eat up a lot of capital budgets, very much like what we have seen with Chevron and its Gorgon/Wheatstone LNG projects. Once online, though, it will represent a huge shift in capital in development and productive capital. As a result it could significantly boost BP's bottom-line returns and give BP's stock a big boost.

Effectively deploying its immense horde of cash
BP has a ridiculous amount of cash on its books -- $32.5 billion, to be exact. Even though BP isn't even close to the largest oil company in the business, the amount of cash it's holding on the books seems outrageous.

Normally holding that much cash on hand is a waste. At best, it's a sign that a company is expecting market conditions to get really worse. At worst, it's a company that doesn't know to effectively deploy capital and boost returns. After all, we invest in stocks because we want to see a return. If we wanted unproductive capital we'd put our money under the mattress.

To be fair to BP, though, it's probably holding on to that much cash for a couple of reasons: oil-spill contingency, and keeping a favorable debt rating while capital is tied up in big projects. Up until a few months ago, the cleanup costs and the uncertainty related to court decisions around the Deepwater Horizon spill meant BP would need to be ready to shell out a lot of money fast. Now that the court cases have been mostly settled and BP knows its spill litigation costs -- about $1 billion a year for the next 18 years -- it doesn't need to keep that war chest as full for the spill.

The other potential reason it's keeping that much cash on hand is to keep a favorable debt rating and allow it access to cheap debt capital. With all of that cash, the company has net debt of $25.1 billion and a net debt-to-capital ratio of 17%. Without that cash, BP would have a debt-to-capital ratio of 32%. Debt to capital is a gauge at which credit rating agencies look to determine credit worthiness, and keeping it low will allow BP better access to financing to build out these massive development projects.

Once those projects come online and raise equity value in the company, though, it will give BP the ability to deploy that cash more effectively. It could make an acquisition of a couple of distressed shale producers with great assets, or it could even do an enormous share repurchase program. If the company can deploy that cash in a shareholder-friendly way, then BP's stock could benefit immensely as a result.

What a Fool believes
BP isn't quite out of the weeds from the downturn in oil prices. The oil and gas production side of the business barely treads water at today's prices, and it's not generating enough cash from operations to meet its funding obligations. Of course, oil prices would go a long way in boosting BP's stock price, as well as give its earnings a much-needed lift, but as investors we can't rely solely on the whims of oil prices to dictate the outcome of our energy investments.

If we were to see sanctions lifted in Russia, the development of the Shah Deniz phase 2 project without too many budget overruns, and the effective deployment of BP's war chest of cash, they could represent huge catalysts to BP's stock independent of where oil prices go over the next couple of years.