Please ensure Javascript is enabled for purposes of website accessibility
Log In Help Join The Motley Fool
Free Article Join Over 1 Million Premium Members And Get More In-Depth Stock Guidance and Research
By Jay Jenkins - Sep 28, 2015 at 6:18AM

What can investors learn about the bank's future from its income and expenses today?

Bank of America (BAC -0.60%) is a massive and complex institution, but that doesn't mean analyzing the company's fundamentals has to be all that difficult. To prove it, let's break down the company's income statement with just two simple charts.

A closer look at the bank's revenue streams.
Before diving head-first into everything Bank of America, we must first cover the concept of the bank's net interest income. It's that important.

Banks accept deposits from customers -- checking and savings accounts, or certificates of deposit. Those accounts pay deposit holders a small amount of interest for keeping that cash at the bank. Deposits account for about 60% of the bank's funding sources, making them critically important.

The bank reinvests those deposits in the form of loans. Loans are the largest asset group on the bank's books, representing over 40% of total assets. To make money, the bank charges a higher interest rate for loans than it pays on deposits. The difference is known as a bank's net interest income.

Generally speaking, the bigger the bank, the more revenue streams it will have. Bank of America has a strong income stream from its wealth management and brokerage business, primarily driven by its Merrill Lynch subsidiary. In aggregate, investment and brokerage income represented 15.2% of its Q2 revenue. The bank also generates meaningful revenue from service charges, trading, investment banking, card, and mortgage fees.

From this 40,000-foot perspective, Bank of America's business really is not all that complex.. It primarily accepts deposits, invests in debt, and sells secondary products that assist its customers with all of their varied financial needs.

And now, let's talk about expenses
In the same way, Bank of America's expenses are not very complicated either. 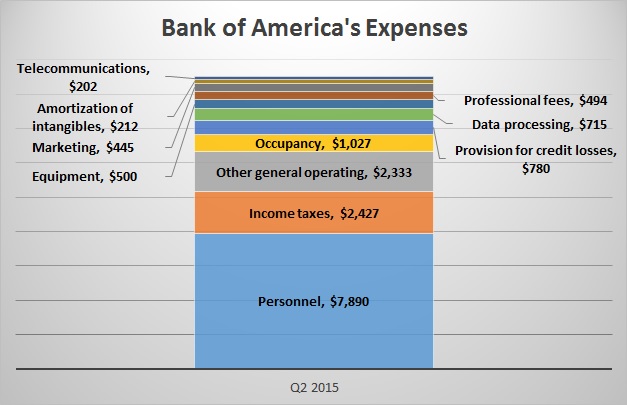 The interest a bank pays to its depositors is always a huge expense, particularly when interest rates are at higher levels.  However, it is convention to account for that expense as a component of the net interest income we discussed above. That's why interest expense is not included in the expense chart here.

With interest expense out of the way, we can focus on the bank's other large expenses. Personnel expense -- the bank's largest -- constitutes 46% of operating expenses, nearly three times more than the 14% representing income taxes. The rest of the bank's operating expenses primarily revolve around operating Bank of America's branch network across the country.

Data processing, equipment, occupancy, telecommunications, and other operating expenses combine to account for billions of dollars in expenses. Remember, these figures only represent three months of business. These are massive dollar amounts, and each is required to keep the doors open each workday.

What does this exercise teach us about Bank of America's business?
Now that we are fully acquainted with B of A's revenue streams and expenses, we need to make sense of what this all means to us as investors.

First, deposits and loans clearly matter. The company's net interest income is far and away the largest and most important source of revenue.

Third, we can't ignore the gorilla in the banking industry right now: interest rates. For Bank of America, rates are going to play a major role over the next few years. We can see why in how the income statement is constructed today.

The short-term repercussions are difficult to predict, but over a long time horizon, a higher-rate environment will be a net positive for banks. Interest rates will rise for both borrowers and depositors, but the price of loans will rise farther than the interest paid on deposits, in large part because of all the deposit accounts that don't offer any interest payments at at all.  When the dust settles, that means higher net interest income.

Looking back at Bank of America's expenses again, there are branch costs, employee costs, data costs, etc. -- none of which will rise because of interest rates. That means that as the bank's net interest margins expand, that increase should translate directly to higher net income.