Please ensure Javascript is enabled for purposes of website accessibility
Log In Help Join The Motley Fool
Free Article Join Over 1 Million Premium Members And Get More In-Depth Stock Guidance and Research
By Adam Levine-Weinberg - Sep 28, 2015 at 9:50AM

The stock has gained 150% in the past year, but that doesn't mean investors should take the money and run.

A year ago, popular business magazine Barron's recommended buying shares of JetBlue Airways (JBLU 5.01%) to take advantage of new efforts to improve its profitability. It was a great call. Shares of JetBlue have surged 150% in the past year, trouncing the market. 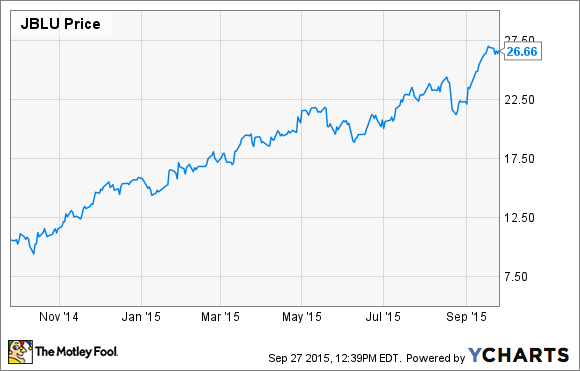 However, in this weekend's edition of Barron's, Avi Salzman recommended that investors take profits in JetBlue stock, arguing that the stock price already reflects the upside from its profit improvement initiatives.

It's reasonable for investors to take some money off the table after a stock rallies as much as JetBlue has. That said, to earn truly spectacular profits in the stock market, you have to let your best stocks continue to grow for as long as the initial investment thesis remains valid. In the case of JetBlue, this logic suggests that investors should hold onto their shares.

Time to move on?
Barron's provides several arguments for why JetBlue shareholders should cash in their chips now. First, Salzman notes that JetBlue has implemented many of the changes he had expected, such as adopting a new fare structure that includes a charge for checked luggage. He argues that this is reflected in the stock price, though, with the stock trading for 12.1 times its expected 2016 earnings.

JetBlue trades at a premium to other airline stocks. Image source: JetBlue.

Second, Salzman points to a drop in JetBlue's load factor and unit revenue in August as evidence that the company may not be able to keep planes full at its current growth rate.

Third, he cites rising competition, particularly in Boston, which could dent JetBlue's profitability. However, these arguments for selling the stock aren't as strong as they may seem.

JetBlue still has the wind at its back
Let's examine these three potential issues in reverse order. The Barron's piece cites analyst Daniel McKenzie as saying, "... [W]e are seeing competitive capacity from JetBlue's top five competitors double in the fourth quarter at Boston..." That's significant because Boston is JetBlue's second-largest market after New York.

However, something must have been lost in translation here. No airlines are doubling their capacity in Boston. There are a few new routes scheduled, such as a Southwest Airlines flight from Boston to Austin, but the changes aren't that dramatic. Perhaps McKenzie meant that capacity growth was doubling -- i.e., from 2% to 4% or from 3% to 6% -- but that's not a problem if the growth rate started from a low base.

Meanwhile, competition is about to fall on the key routes from New York's JFK Airport to Los Angeles and San Francisco as United Continental exits the market in late October. This should bolster fare levels, while allowing JetBlue to add flights on its popular Mint premium aircraft. JetBlue will do so by increasing utilization of the Mint fleet, improving its operating efficiency.

Second, Salzman's worry about falling unit revenue and load factors is an overreaction to a single data point. Labor Day fell on September 1 last year, compared to September 7 in 2015. As a result, August 2014 benefited from a lot of Labor Day travel, which shifted to September this year. For the full third quarter, JetBlue expects its unit revenue to be roughly flat year over year.

Finally, most of the benefits of JetBlue's profit improvement initiatives are still to come. JetBlue only implemented its new fare structure in the middle of the year, so it expects to reap less than a third of the long-term annual benefit in 2015. Similarly, the growth of its Mint premium service has been very successful, but JetBlue will continue to expand Mint later this year and throughout 2016.

Meanwhile, JetBlue hasn't even begun its project to add seats to its A320s. Most of the benefits of that project will show up in 2017 and 2018. A new, more lucrative credit card deal will go into effect in 2016 as well.

Strong profit growth should continue
Indeed, the Barron's piece makes the same mistake that JetBlue bears did a year ago. JetBlue also looked somewhat expensive compared to other airline stocks a year ago: at the time, it traded for 11.5 times analysts' 2015 earnings estimates. But the analysts' estimates were too low by half!

Airline analysts have continued to steadily increase their JetBlue EPS estimates for 2016. In the last three months, the average estimate has jumped from $1.96 to $2.18, which would represent a 15% increase from JetBlue's expected 2015 profit of $1.89 per share. This may still be too conservative, though.

For example, JetBlue paid $2.10/gallon for fuel in the first half of 2015. If oil prices remain on their current trajectory, its 2016 fuel cost savings alone could account for that much earnings growth. The impact of bag fees, improved credit card terms, and the expansion of Mint would all be incremental and could push JetBlue's EPS to $2.50 or more.

Even if JetBlue doesn't manage to beat the current analyst EPS estimates for 2016, 12.1 times earnings isn't much to pay for a company capable of growing at a mid- to high-single-digit rate for many years to come. Thus, investors who cash out of JetBlue stock now may regret it a few years down the road.