The retailer's fortunes have been on a multiyear slide, but there's one way it can change course.

Sears Holdings sales are in freefall, but the old-line retailer just might have a secret weapon at its disposal.

More than a decade ago, Kenmore appliances owned a 40% share of the market, but along with the fortunes of its owner, Sears Holdings (SHLDQ), the retailer's crown jewel has become a shadow of its former self. According to a survey of consumers by TraQline, Kenmore's market share has shriveled to just under 14% at the end of the second quarter.

There have been many mistakes made by Sears Chairman Eddie Lampert since merging the the chain with Kmart, but it's the appliance business that could be where he finally makes good on his promise to resurrect the retailer.

Lampert's been investing a ton of money into Sears online capabilities, and because it's a retailer's online presence that plays a key role in the consumer's decision-making process when it comes to buying an appliance, it's possible Sears could once again grow into a destination shoppers turn to.

The warm fuzzies
Right now, the Sears experience ranks at just about the industry average, but between the lingering power of the Kenmore brand and Lampert's decision to bring on board both a former Johnson & Johnson executive to fill a just-created position overseeing the retailer's hardlines and Amazon.com's logistics chief to spearhead online fulfillment, Sears Holdings suddenly has plenty of opportunity to win back customer loyalty and sales.

J.D. Power released last week its third annual survey of consumer interaction with a retailer's website and the decisions they make when it comes to buying an appliance. It revealed that when consumers have a positive experience with a site (primarily a result of it being less complicated to navigate than expected), they were more likely to buy more from the site as well as visit its stores.

The 2015 Appliance Shopper Website Evaluation Study analyzed four factors to come out with their brand and retailer rankings, with satisfaction calculated on a 1,000-point scale:

It found that 62% of shoppers were more likely to visit a showroom because a website was less complicated than expected while just 22% had the same feelings if a site was more complicated. Importantly, though, the better retail websites caused two-thirds of consumers to "definitely" consider making other purchases by the brand, with more than half of those visiting brand websites saying the same thing.

Kenmore has long been a shining star for Sears, and customer satisfaction surveys show it can be again.

Wash, rinse, repeat
That's huge for Sears. The Kenmore brand, even if it's lost much of its share of the market, is still highly regarded by consumers as a quality brand.

Sears valued the Kenmore brand, along with Craftsman, Diehard, and the other trade names and intangible assets it owns, at almost $2.1 billion this past January. While that's down considerably from the $2.8 billion it assessed their value at the year before, they'll still generate significant cash flows for the retailer.

Kenmore was also able to hold its own in the J.D. Power website survey, tying for third place with Amana behind No. 1 General Electric and second place KitchenAid.

A growing e-commerce presence
What Sears needs to do then is further the customer experience. Internet Retailer ranks Sears fifth overall in its Top 500 Guide of e-commerce companies, having grown online sales from $3.1 billion in 2010 to $5.7 billion, for an annual growth rate of nearly 13%. Its Shop Your Way member loyalty program, which has become an essential component of Sears integrated retail experience, now accounts for about three quarters of all its eligible sales.

But as mentioned earlier, it's currently only a so-so experience for consumers as the J.D. Power survey found it ranked right in line with the industry average, with an 828 score (the average was 829).

Perhaps not surprisingly, Lowe's ranked highest among appliance retailers with a score of 848, up by nine points from 2014. In its second-quarter earnings, same-store sales came in stronger than expected due to increased sales of appliances and outdoor power equipment. The DIY center has quickly become the go-to place to find your large home-goods needs.

Best Buy and Home Depot also placed well, but both Costco and h.h. gregg fell short of the industry average. 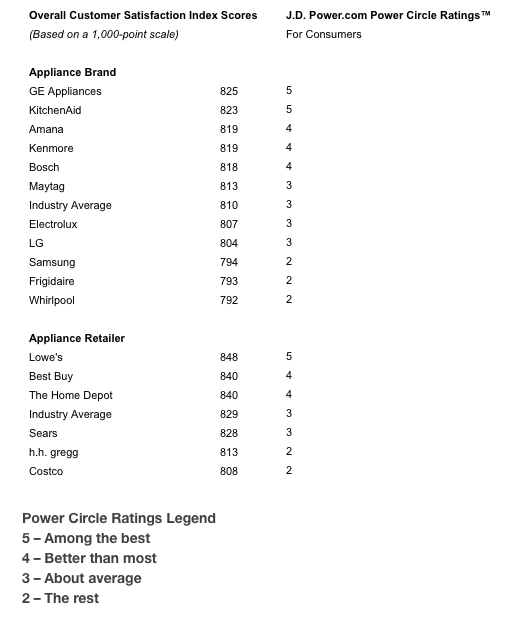 Hard choices
Sears' new president of hardlines, Lyn Pendergrass, has a strong background in promoting global brands while Girish Lakshman's appointment to be president of the retailer's fulfillment post shows the retailer is serious about bolstering its online presence.

For all the fumbles and value destruction CEO Lampert has engineered at Sears, it could be that he's finally found where his wheelhouse is and he's swinging for the fences with it. The retailer has plenty of room to grow in gaining back customer loyalty when it comes to appliances, and with a valuable asset like Kenmore, this could be the path to do it.