Please ensure Javascript is enabled for purposes of website accessibility
Log In Help Join The Motley Fool
Free Article Join Over 1 Million Premium Members And Get More In-Depth Stock Guidance and Research
By Matthew DiLallo - Sep 28, 2015 at 11:16AM

What: Shares of Energy Transfer Equity LP (ET -0.89%) fell more than 11% in early morning trading on Monday. Driving the downdraft was the announcement that the company had finally secured a deal to buy rival Williams Companies (WMB 0.53%). The deal was secured after months of negotiation, resulting in the creation of the third-largest energy franchise in North America.

So what: Negotiations between Energy Transfer Equity and Williams Companies were first made public in late July when after Williams rejected a previous merger offer. That offer was an all-equity deal valuing Williams at $64 per share or $53.1 billion, which included the assumption of debt. Furthermore, that deal called for Williams to terminate its merger agreement to buy the outstanding units of its MLP Williams Partners that it didn't already own. Williams thought the offer price undervalued its franchise and it initiated a strategic review to see if it could find a better offer. Such an offer never materialized, as the energy sector took a turn for the worse when oil prices rolled over, sending the equity prices of all three companies much lower. 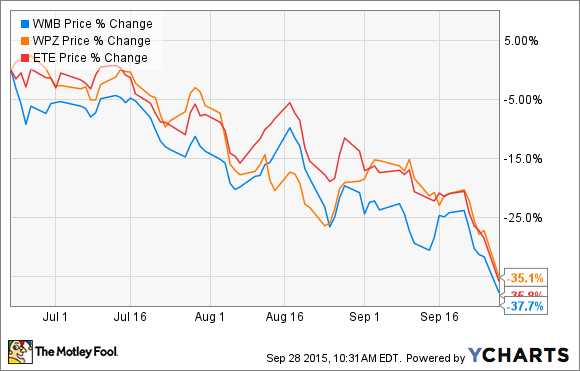 That brought the pair back to the negotiating table. They were able to hammer out a new agreement, which values Williams at just $43.50 per share or $37.7 billion. This agreement, however, is an equity-and-cash deal, as Williams' shareholders will receive 1.5274 shares of a new publicly traded C-Corp, Energy Transfer Corporation, and $8 per share in cash as well as a special dividend of $0.10 per share. Furthermore, the deal also results in the termination of Williams Company's merger agreement with Williams Partners, which will remain a separate publicly traded entity.

Now what: This is an interesting turn of events, as Williams had seemed to be dead set against combining with Energy Transfer, preferring to go it alone. However, giving the renewed worries in the energy sector and the strategic rationale for the combination, it finally agreed to terms. In doing so, Energy Transfer will become one of the largest energy franchises in the world, with an enormous growth runway due to the number of projects both companies have in their backlog. Furthermore, Energy Transfer estimates it will be able to capture upwards of $2.4 billion in commercial and cost-saving synergies over the next few years. That suggests that the sell-off today might be an overreaction, as the long-term strategic rationale of the deal appears to be quite compelling.