With analyst estimates varying wildly, Micron will need to convince investors that the worst-case scenario for the company is overly pessimistic.

Memory chipmaker Micron (MU -3.03%) is set to report its fiscal-fourth-quarter earnings after market close on Thursday, Oct. 1. Micron's stock has been hammered so far this year, down nearly 60% year to date, with both a weak PC market and concerns regarding DRAM pricing weighing on the stock. This decline in the stock price follows a two-year run that saw shares of Micron increase by a factor of six. 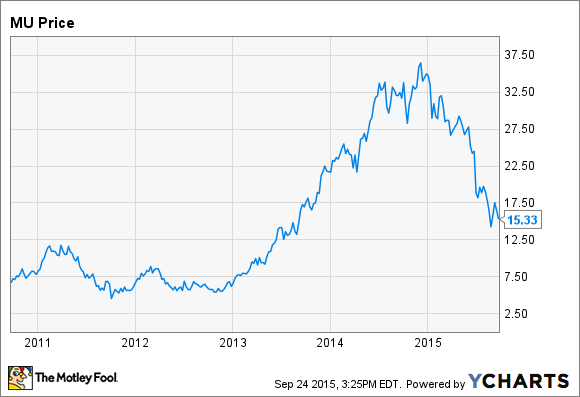 There's a tremendous amount of uncertainty surrounding Micron. Analyst estimates for EPS in fiscal 2016, for example, range from $0.65 all the way up to $4.05. With a range that wide, the average estimate doesn't carry much meaning at all. Here's what analysts are expecting from Micron's fourth-quarter results, as well as a few things that investors should keep an eye on.

What analysts are expecting
Analysts on average expect Micron to report revenue of $3.84 billion for the fourth quarter, although the range of estimates is wide, with a low estimate of $3.51 billion, and a high estimate of $4.82 billion. This is compared to $4.57 billion during the same period last year, with the average estimate representing a 16.1% year-over-year decline.

Predicting anything about Micron's results is challenging. PC sales slumped during the second quarter, and while there are signs that things are stabilizing, there's still a lot of uncertainty. Meanwhile, DRAM prices have been falling fast, and Gartner is predicting that DRAM oversupply will plague the industry through 2017. That's potentially bad news for Micron's bottom line.

Beyond analyst expectations, investors should pay attention to a few things when Micron reports earnings.

How are margins holding up?
During the third quarter, Micron's profits fell off a cliff. Net income of $491 million was down 39% year over year, with gross margin falling from 34.4% to 31.2%. In Micron's Compute Networking Business Unit, which includes DRAM that goes into PCs and servers, revenue declined by 17% sequentially, with operating income contracting by 46%.

The only segment that grew was the Mobile Business Unit, which includes DRAM aimed at mobile devices. This was the most-profitable segment for Micron, both in absolute terms and as a percentage of revenue, but it wasn't able to counteract weakness in the PC market.

Investors will want to look at two things here: how the PC segment margins evolve during the fourth quarter, and whether the mobile segment continues to do well. If the PC business appears to stabilize, it could signal that the worst-case scenario for Micron -- DRAM oversupply lasting years -- may be less likely to occur.

IDC expects global smartphone shipments to grow at a compound annual rate of just 7.9% during the next five years. A drop in Micron's mobile margins during the fourth quarter could signal that oversupply is creeping into the mobile segment.

Micron's results during the next few years will depend heavily on how supply and demand in both the DRAM and NAND markets play out. The worst-case scenario is very bad for Micron, and it could lead to a repeat of 2012, when the company posted a massive loss. But better-than-expected numbers from Micron for the fourth quarter could signal that this worst-case scenario is overly pessimistic.

Timothy Green has no position in any stocks mentioned. The Motley Fool recommends Gartner. We Fools may not all hold the same opinions, but we all believe that considering a diverse range of insights makes us better investors. The Motley Fool has a disclosure policy.

Why Micron Is Rallying Today
415%