There's a knee-jerk response going on.

When it comes to GoPro (GPRO 0.54%) stock, the market has clearly been uneasy. In less than two months, shares have been halved from levels above $60. But the sell-off, which primarily appears to be driven by lower-than-expected guidance provided by its chipmaker, Ambarella, seems to have little substance.

Looking at guidance
Sales in Ambarella's wearables category will probably be down, year over year, during Q3, Ambarella management warned during its second-quarter earnings call. Since many of the chips in Ambarella's wearable video category go to GoPro, does this mean investors should conclude GoPro is in trouble? According to the market's reaction to GoPro stock when Ambarella shared this news, concern does seem to be the knee-jerk response.

But this is a silly reason to worry -- and here's why: GoPro's side of the story, which is the side that matters since it's the company actually selling the GoPro cameras, is quite the opposite.

Just 11 days before Ambarella said it expects a year-over-year and sequential decline in demand for its wearables segment during Q3, GoPro told investors it is "quite optimistic about the remainder of 2015" and that it expects "increased revenue across all channels and [geographies], year over year." For the third quarter specifically, GoPro said it expected revenue to be between $430 and $445 million, representing about 56% year-over-year revenue growth. Could the storyline for GoPro really have shifted from expectations for huge growth to one of waning demand this dramatically in only 11 days? Probably not.

Even more, investors would be wise to take GoPro's quarterly guidance seriously. The company has failed to exceed both its own guidance and analyst expectations every quarter since it went public over a year ago. 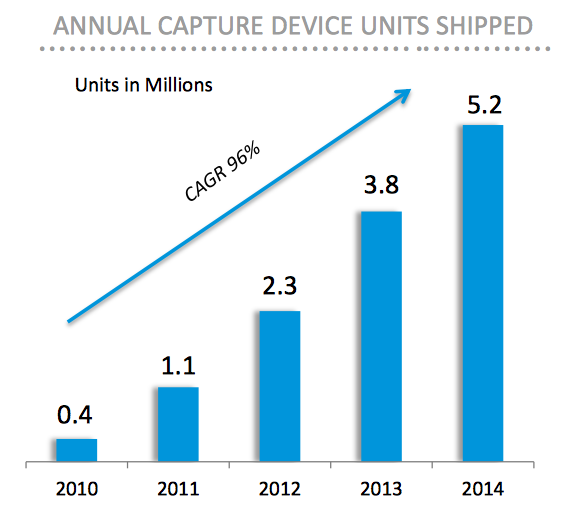 But for the critics who insist on thinking of Ambarella's guidance as a bad sign for GoPro's future, it should be noted that even Ambarella shrugged off the temporary downturn in its wearables camera chip sales.

"Historically Q3 has always been our seasonally high quarter," said Ambarella CFO George Laplante. "But because the launches occurred in Q2, I think we really have to look at the average of Q2 and Q3 as to volumes in that marketplace." And Laplante also noted that the average growth for that season looks fine, prompting him to predict there shouldn't be "any difference in the seasonality going forward."

The argument that Ambarella's guidance for its wearables camera chip segment foretells tough times for GoPro just doesn't hold up. And the company's conservative valuation in relation to its growth prospects makes this sell-off seem even more irrational.

The best action for investors to take from here is to simply wait on an update directly from GoPro. As it stands, the last note from the company came in a CNBC interview with GoPro CEO Nick Woodman last week, in which he sounded quite optimistic about the company's prospects.

Meanwhile, I'm seriously considering taking advantage of this illogical market behavior and buying shares during the next week.