Please ensure Javascript is enabled for purposes of website accessibility
Log In Help Join The Motley Fool
Free Article Join Over 1 Million Premium Members And Get More In-Depth Stock Guidance and Research
By Cory Renauer - Sep 29, 2015 at 8:41AM

I don't get to say this often, but Eli Lilly (NYSE: LLY) knocked one out of the park recently. Results from a post-marketing study showed diabetes drug Jardiance significantly reduced patients' chances of dying from a cardiovascular event. This is especially ill-timed for Johnson & Johnson (JNJ 1.75%), which markets a similar drug that has been raising safety concerns lately.

Now, before you go dumping shares of the world's largest healthcare company for struggling Eli Lilly, let's take a closer look at the field and see what this could mean to investors.

A class apart
Jardiance is member of a new class of diabetes medications known as sodium-glucose cotransporter 2 inhibitors, or SGLT2 drugs. Developed in partnership with Boehringer Ingelheim, it lowers blood sugar levels by allowing patients to excrete glucose through their urine. This new mechanism is especially helpful when treating scores of type-2 diabetics who no longer respond properly to insulin.

Last month, Lilly raised some eyebrows when it announced a cardiovascular risk reduction for Jardiance. As is typical in this industry, the initial announcement lacked specifics. Earlier this month, however, when Lilly presented data that showed a 38% reduction in relative risk of death from cardiovascular causes for patients receiving Jardiance over those on placebo, the crowd actually applauded.

The enthusiasm stems from an inability of other classes of diabetes medications to show a similar benefit. Other medications do a fine job of reducing blood glucose levels, but to date, none have been able to show a significant reduction of death by heart attack or stroke. Since diabetics are roughly 1.8 times more likely to die of cardiovascular disease than the general population, this is indeed a very big deal.

Eli Lilly's SGLT2 inhibitor may be the first to show such a benefit, but Johnson & Johnson's Invokana won FDA approval in March 2013, about 16 months ahead of Jardiance. The head start has been tremendous; Invokana is on pace to surpass $1 billion in sales this year, while sales of Jardiance were too low to be considered material when Lilly reported second-quarter earnings.

Something's got to give
Even ahead of Lilly's announcement, the tables may have started turning. Earlier this month, the FDA announced it would add a bone density warning to Invokana's label. This is a result of a post-marketing study with over 700 elderly patients that the regulator required as a condition for approval. Those receiving Invokana showed an increased risk of fracture, and a reduction of bone mineral density over patients receiving sugar pills. Adding these concerns to the increased risk of urinary tract infections associated with Invokana gives physicians more than enough reasons to be leary.

The big question now is whether this will boost Jardiance's profile over other SGLT2 drugs, or be viewed as a classwide benefit. The good news is that Johnson & Johnson can easily afford a little competition in this space. The $318 million of Invokana sales recorded in the second quarter comprised just 1.8% of total sales for the period. Given that Invokana was licensed from Mitsubishi Tanabe, and not discovered in-house, its contribution to the bottom line may be even smaller. 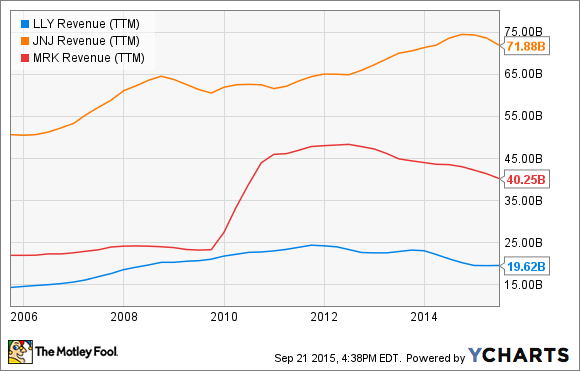 A disadvantage for Johnson & Johnson here would barely move the needle for the pharmaceutical giant, but Lilly badly needs another blockbuster. Should Jardiance cross the $1 billion mark, it could raise the company's top line more than 5%.

It may take a few years before we know for sure if the cardiovascular benefit is classwide, as Lilly wasn't the only company required to conduct this type of post-marketing study. Johnson & Johnson is in the middle of a 4,400 patient trial that should finish up in 2017. Partners AstraZeneca and Bristol-Myers Squibb also have an FDA-approved SGLT2 drug named Farxiga in a post-marketing cardiovascular outcome study. An increased number of bladder cancers diagnosed among Farxiga users during the clinical trials leading to its approval have muted sales of the drug, but it could also show a cardiovascular benefit similar to Jardiance.

If Jardiance isn't unique
If Jardiance's cardiovascular benefit turns out to be a classwide advantage, the company with the most to lose might be Merck. Its type-2 diabetes pill, Januvia, is the company's single largest source of revenue. The Januvia line is on pace to reach $4 billion in sales this year, and many view the SGLT2 class as a direct competitor. This is hardly the case, as most type-2 diabetics try several drugs before finding a solution -- often a combination -- that works for them. A mortality benefit will likely lead to patients trying SGLT2 drugs before Januvia rather than after, but Merck's crown jewel isn't going anywhere soon.

It's hard to say if Jardiance's mortality benefit will play solely to Lilly's advantage or the SGLT2 class as a whole, but one thing is certain: The market likes reacting to news of this nature before weighing all the factors. On the day of the announcement, Lilly's shares jumped 6.5%.

In the quarters ahead of Invokana's and Farxiga's cardiovascular outcome data, Jardiance will have an advantage, although I doubt it will raise the company's top line more than a couple of points. In the meantime, stay calm and Fool on.