The moody market has taken its wrath out on biotech stocks far and wide in September. In fact, biotechs are some of the worst-performing stocks for the month: 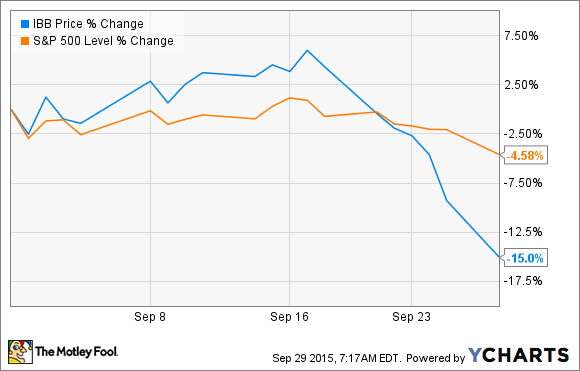 As the cover to "The Hitchhiker's Guide to the Galaxy" emphatically reminds us, though:

After all, this widespread sell-off is probably unwarranted for many stocks and simply represents an industrywide exodus. And if history proves to be any guide whatsoever, this trend will eventually reverse, meaning the brave souls who bought certain biotech stocks now could be sitting in the proverbial catbird chair in the not-so-distant future.

Personally, I'm picking up shares in small-cap companies like Agenus (NASDAQ:AGEN), Exelixis (NASDAQ:EXEL), and Trevena (NASDAQ:TRVN), which have all pulled back from their recent highs during this marketwide correction. Here's why. 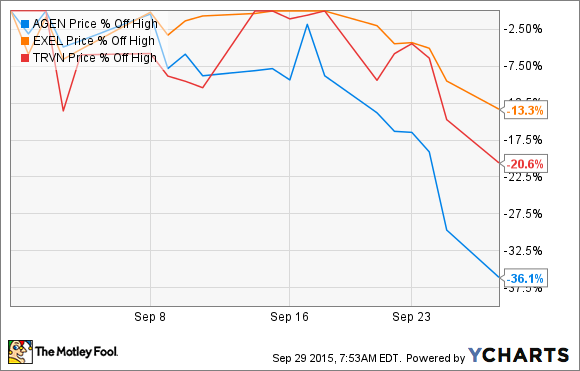 Agenus is positioned to be a key player in the emerging field of immuno-oncology
Apart from Agenus' promising clinical assets in heat-shock protein vaccines and Saponin-based adjuvants, this tiny biopharma offers investors a dirt-cheap ticket to the multibillion-dollar circus known as immuno-oncology.

Cancer immunotherapies are taking the medical world by storm right now, and almost every Big Pharma has dedicated huge resources to capturing a portion of this market that is projected to reach $35 billion by as early as 2020.

While there is no guarantee that any experimental-stage drug will gain regulatory approval, I find Agenus a compelling buy right now because it has multiple checkpoint inhibitors heading into clinical trials with partners Merck and Incyte. As an added bonus, the company sports the Retrocyte Display platform and the rights to antibodies targeting Carcinoembryonic Antigen Cell Adhesion Molecule 1 that should lead to the discovery of several additional therapeutic targets.

All told, Agenus' broad-based clinical approach to immuno-oncology gives it multiple shots on goal toward potentially developing a blockbuster cancer therapy, and that's a big deal for a company with a market cap of around $390 million.

Exelixis' stock price doesn't adequately reflect its commercial potential
I'm licking my chops to buy more Exelixis stock on this dip because the company could see its 2016 revenues grow by an astounding 130% from current levels. The risk factors are that this hefty upward revenue projection is highly dependent on the FDA approving both Cometriq in the second-line kidney cancer setting, and the combo therapy of cobimetinib and Zelboraf for BRAF V600 mutation-positive metastatic melanoma in the near term.

With fairly convincing pivotal-stage data in hand, though, I'm optimistic that both drugs will sail through their respective regulatory reviews. Exelixis may therefore be trading at a mere 3 times its projected 2019 revenues after this pullback, according to S&P Capital IQ.

The market, by contrast, is acting like these experimental cancer drugs are doomed to be rejected or fail to capture much of their respective markets. While that's certainly a possibility, I think Exelixis is actually a diamond in the rough that's presently under-appreciated by a market in full meltdown mode.

Trevena could be grossly undervalued
Although Trevena's stock has appreciated by around 77% so far this year, I think this thinly-traded biotech's story is only now starting to garner the attention it deserves. Across two mid-stage studies, Trevena's experimental medicine for acute pain, TRV-130, has easily outperformed placebo, as well as the most commonly prescribed drug, morphine, in the post-surgical setting.

What we could be looking at, here, is a drug set to capture a big chunk of the $11 billion acute pain market. Just for reference, Trevena's market cap presently stands at approximately $511 million, showing that TRV-130 wouldn't have to make much headway into this vast market for the company's stock to be grossly undervalued at present.

Now, this drug still has a long way to go in the clinic before going up for a regulatory review. But the drugmaker has shored up its balance sheet recently through a $63 million stock offering that should allow the company to complete TRV-130's clinical program.

Of course, TRV-130 could turn into a pumpkin come midnight, but I'm encouraged by the drug's stellar and consistent clinical trial results to date.

Are these stocks worth buying right now?
I think all three stocks are worth owning by risk-tolerant investors. In my view, the market has thrown the baby out with the bathwater when it comes to these three small-cap biopharmas. So, investors who don't mind some short-term volatility may want to take advantage of this sell-off to grab some shares.