The relentless focus on one-year returns.

About 4.6 billion years ago, a cloud of hydrogen and dust collapsed and gave birth to our Sun. Then, 4.5 billion years ago, some comet debris coalesced and formed planet Earth. The laws of physics mean the gravitational pull of the former pulls the latter around its orbit every 365.25 days.

Somewhere along the way we decided that this orbit -- one year -- is the perfect amount of time to measure a money manager's performance against.

Daniel Kahneman is one of the smartest scientists to ever live. But I never agreed with an assessment he made about the performance of money managers.

Kahneman took the performance data of 25 professional investors, and calculated the correlation of one year's performance with the next. He wanted to separate skill from luck. If a money manager was skilled, he should beat the market every year, the logic went. If he only beat it some years, he was just lucky. Kahneman wrote:

I computed the correlations between the rankings of advisors in different years, comparing Year 1 with Year 2, Year 1 with Year 3 and so on up through Year 7 with Year 8. That yielded 28 correlations, one for each pair of years. While I was prepared to find little year-to-year consistency, I was still surprised to find that the average of the 28 correlations was .01. In other words, zero. The stability that would indicate differences in skill was not to be found. The results resembled what you would expect from a dice-rolling contest, not a game of skill.

You should expect year-to-year stability in investing returns if there is something special about a year. But there's not. A money manager is looking for exploitable opportunities, not all of which will fit neatly into a time period governed by the gravitational pull of a celestial ball of gas. Anyone using astrology to measure future returns is considered a lunatic, but almost everyone uses it to measure past returns.

Take the 50-year record of Warren Buffett, whose success virtually everyone agrees comes from more than luck.

Buffett has outperformed the S&P 500 by more than a million percentage points since he took over in 1964. But he underperformed the market in a third of all years -- better than a coin toss but not much. In years when Berkshire Hathaway (BRK.B -0.20%) generated its highest returns, beating the market by more than 10 percentage points, it was almost as likely (39.5% of the time) to underperform the market the following year as it was to beat it at all.

If you measure Buffett based on the stability of year-to-year returns, he hardly looks better than a coin flipper. It's not until you view five-, 10-, and 15-year periods that he's delivered consistent outperformance: 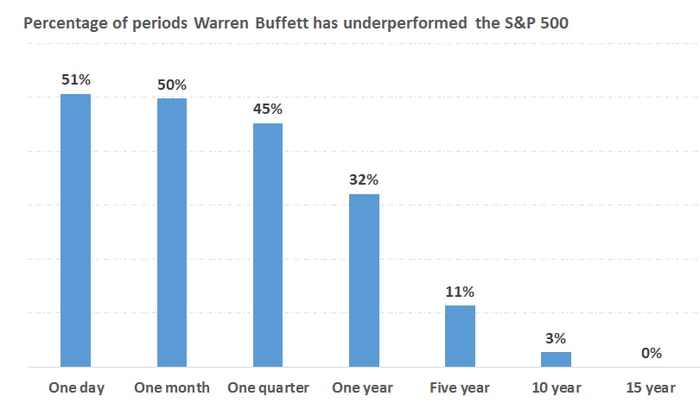 Buffett's partner, Charlie Munger, is about the same. Munger ran a hedge fund from 1962 to 1975 that beat the market by more than tenfold during its lifetime. But he underperformed the market in more than a third of all years, including four of his last six.

Kahneman's main point is that most money managers trail the market, which is true no matter how you slice the numbers.

But an obsession with stable year-to-year performance makes investors look worse than they are. In March,The New York Times reported that out of 2,862 equity mutual funds, not a single one beat the market in each of the last five years. But if you look at an entire five-year period, rather than individual years, you'll see that about one in five equity funds did outperform its benchmark. That's still abysmally low, but "beating the market every year for five years" gives a different answer than "beating the market over the lastfive years." And the latter is clearly more important.

To me, the problem is that an obsession with the calendar pushes investors to focus on beating the market each year, which is a perfectly insane, unattainable goal. No one can do it. But managers feel like they have to do it because it's the standard measure of performance. Many managers will be fired by investors after a bad year. Their only hope is a desperate, rarely successful attempt to fit outperformance within the time frame of Earth's orbit. Does anyone see how crazy this is? People use one-year returns to show how hard it is to beat the market, but I wonder if the biggest challenge to beating the market is the pressure to do it in one-year intervals.

Part of me gets it. Performance has to be measured, and measures need a yardstick, however arbitrary. We might have a different list of baseball greats if players were allowed two strikes instead of three and a different list of Super Bowl champions if a quarter lasted 16 minutes rather than 15. But the line has to be cut somewhere.

Investing, though, is personal. All that matters is performance between today and your end goal, not the individual years in between.

"Better three hours too soon than a minute too late," Shakespeare said. I imagine that's the tyrannical mind-set of so many investors fighting to outperform by Dec. 31. I don't ever want to go there.

Why Berkshire Hathaway Is a No-Brainer Bear Market Stock