What: Shares of Sequenom (NASDAQ: SQNM) were down as much as 20% today after holding an Investor and Analyst Day yesterday.

So what: Neither investors nor analysts seem to be all that impressed with the company's plans for developing new diagnostic tests for reproductive health and oncology and for selling the products Sequenom already has on the market.

Financial services firm Ladenburg Thalmann downgraded Sequenom from neutral to sell. William Blair only went down to market perform, but the analyst had Sequenom at outperform before the downgrade.

Following their advice, or of their own volition, investors hit the sell button today.

Now what: Sequenom is down more than 45% over the last three months. 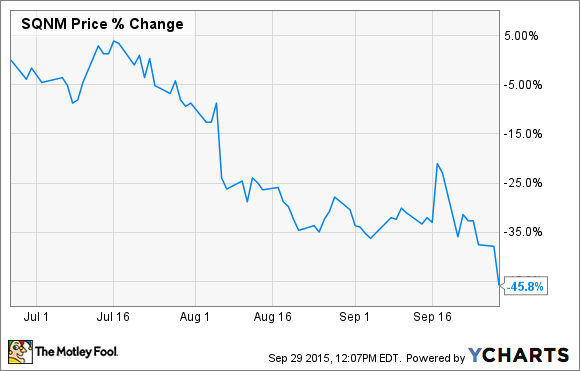 Trying to catch a falling knife is usually not a good idea, especially after the company's CEO unexpectedly left and Sequenom said the second half of the year would produce less revenue than the first half. It doesn't look like any recovery will be quick, which seems to be the reason for the downgrades.
Analysts tend to be short-term thinkers.

But with the massive slide, we're getting into a range where it's worth putting Sequenom on a watch list to see if the company can turn things around. Management is shooting for revenue of $500 million in 2020, which should produce a nice return from here if Sequenom can hit that goal. Obviously that's a big if.