Please ensure Javascript is enabled for purposes of website accessibility
Log In Help Join The Motley Fool
Free Article Join Over 1 Million Premium Members And Get More In-Depth Stock Guidance and Research
By Asit Sharma - Sep 29, 2015 at 12:15AM

Shares of the Mediterranean-inspired fast casual chain are up roughly 24% over the last year, but similar appreciation, at least in the near future, may prove elusive.

Over the past year, as the broader stock market's momentum has eroded, a few investment themes have disproportionately rewarded equity investors. Holding restaurant stocks has turned out to be a shrewd bet: The economy may be decelerating, but apparently, we're still eating out as much as ever.

Among fast casual restaurants, Zoe's Kitchen Inc. (ZOES) has returned amply to shareholders who have invested in its Mediterranean-themed cuisine. Since its April 2014 IPO, company stock is up more than 50%. Over the past 12 rolling months, Zoe's has outpaced the S&P 500 Index's negative return, but also the excellent performance of the Dow Jones Restaurants and Bars Index: 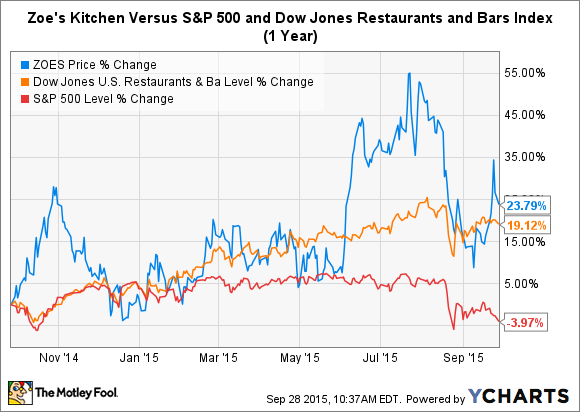 It's apparent from the chart that despite a cumulative 24% gain, the summer was a long and unpredictable ride for Zoe's shareholders. Sometimes a huge ramp-up in volatility can signal a change in price trend. Will this be the case with Zoe's Kitchen?

The balance between revenue growth and earnings
Zoe's second-quarter earnings, reported in late August, provide some basis for divining the near-term destiny of its shares. In Q2 2015, Zoe's increased revenue by 30% over the prior year period and enjoyed comparable restaurant sales expansion of 5.6%. Yet this fine second-quarter report was a bit softer than Q1, in which the company booked a revenue increase of 36.2% year over year, and a rise in comparable sales of 7.7%.

Any weakness in Zoe's top-line growth is received with foreboding by investors, as sales, not earnings, currently drive Zoe's valuation. That's because, so far in its brief life as a publicly traded company, the Plano, Texas-based chain has achieved fairly slim operating and profit margins. Operating income tends to average between 3% and 4% of sales in a given quarter.

And, for the time being, the company doesn't appear to have a great amount of leverage to significantly increase earnings. This is apparent from Zoe's Kitchen's closely watched "restaurant contribution" metric.

This metric shows us how much money is left from every sales dollar Zoe's garners after considering the costs of running locations.  Broadly speaking, the formula for restaurant contribution is sales minus food costs, labor costs, and restaurant operation expenses.

While the company has made some progress in food costs this year -- reducing cost of sales nearly 2% to 31.5% in the first two quarters of the year -- this has been offset somewhat by slightly higher labor and restaurant operation expenses.

As a result, restaurant contribution has improved but a slight bit, from 20.9% in the first half of 2014, to 21.6% in the comparable 2015 period. In other words, after direct restaurant expenses, only about 21.6 cents of each sales dollar Zoe's books remains to absorb general and administrative expenses, depreciation and amortization, interest expense, taxes, and the like.

Zoe's probably won't report great leaps in restaurant contribution anytime soon. The company's restaurant margin is structural, a tried and true formula that works at this level to deliver consistent profitability on a per-store basis. Review Zoe's recent history before going public, and you'll find that restaurant contribution hasn't changed much in several years. In fact, it's held within a stable but extremely tight band of between 20% and 22% annually from 2009 to 2013.

While CEO Kevin Miles mentioned during the company's last earnings call that Zoe's is experimenting with throughput initiatives to hone service efficiency, there's simply not a great deal of leverage at present to increase earnings, outside of scaling up sales.

Investors seem comfortable paying for Zoe's top-line potential. Shareholders certainly appreciate that as of the end of this year, the company will have added between 31 and 33 new restaurants to its system, an expansion of 25% versus last year's ending base of 132 locations. And though comparable restaurant sales slowed somewhat last quarter, they're still projected to finish the year at a rate of between 5% and 6%.

In all, it may take the catalyst of revenue surprises in the coming quarters for Zoe's to continue its recent steep rise. The company is run in a disciplined fashion, and the fast-casual Mediterranean niche it occupies hardly teems with fierce competition.

Yet revenue, which may be slowing a step or two, coupled with little operating leverage, may moderate the company's ascent in the near term. You can see some of the misgivings already reflected in the summer stock-price volatility I mentioned. And if the broader market continues to weaken, shareholders may find a stronger rationale to realize some of their profits now, placing another drag on Zoe's quick climb.