Brace yourself for a potentially rocky third-quarter earnings season, and keep a few common-sense points in mind.

What is this bear pondering? Image under Creative Commons license.

Don't look now, but earnings for the S&P 500 are projected to decrease by 4.5% in the current third-quarter 2015 reporting period, according to estimates compiled by Factset.com. As recently as June 30, according to the financial information provider, year-over-year quarterly earnings were predicted to weaken by only 1%. Negative revisions of individual companies' earnings estimates are behind the deteriorating outlook.

Things look even less promising after removing one data outlier. According to FactSet, Bank of America lost $0.01 per share in the third quarter of last year but is expected to post positive earnings per share of $0.36 in Q3 2015. Thus, Bank of America is set to be the single biggest positive contributor to S&P 500 earnings in Q3 2015. Remove this single company from the mix, and FactSet projects that earnings for the S&P 500 will decline nearly 6% year over year.

The study points out that if the expected results hold, this will be the first back-to-back negative earnings quarter since 2009. Compounding the sense of foreboding, revenue in the aggregate is also set to decline, with a forecast of -3.3% for the quarter. And if this forecast holds, we'll see the first three consecutive quarters of revenue decline since 2009 as well.

Finally, even though the S&P 500 is down roughly 6.75% this year, the report highlights that the average one-year forward P/E ratio of 15.2 among index companies is still slightly higher than its five- and 10-year average of 14.1.

It may be time to tread carefully
Thinking of adding to your portfolio this fall? We've enjoyed six years of consecutive appreciation in the broader market, the third longest bull market in U.S. history. But on the other hand, we're faced with an upcoming Q3 2015 season that may deflate the last sanguine hopes that with just three months to go in 2015, we can keep the streak alive.

This realization could amplify growing misgivings and spur investors to begin to take significant profits. The market's shown itself to be utterly resilient in the recent past, but if corporate earnings and revenue are truly at the outset of a negative trend, this time may finally be different.

Of course, there are several strategies an investor can employ if the bull starts to look over his shoulder. One could identify sectors that are still exhibiting positive revenue and earnings growth and drill down for worthy stocks in these sectors. If shareholders begin to punish companies that can't muster meaningful growth rates in their businesses after these past few easy years of market gains, rotation into earnings and revenue growth is a sensible approach.

Didn't I just state a common-sense point? Sometimes it helps, before a potential market storm hits, to recognize what's both simple and conspicuous. The same wisdom may become esoteric, when indexes start to sell off, and anxiety and uncertainty take over.

Begin from a position of strength
The following charts show the forecasted earnings and revenue growth for 10 major sectors of the S&P 500, according to the FactSet data. Perhaps the first thing to note is that the Telecom Services, Consumer Discretionary, Financials, and Health Care sectors all exhibit both positive earnings and revenue trends for Q3 2015. 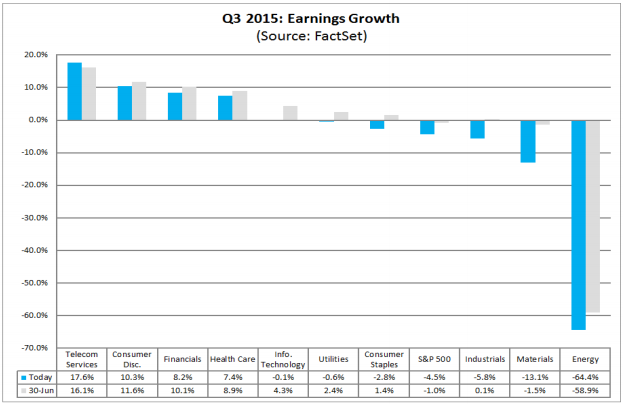 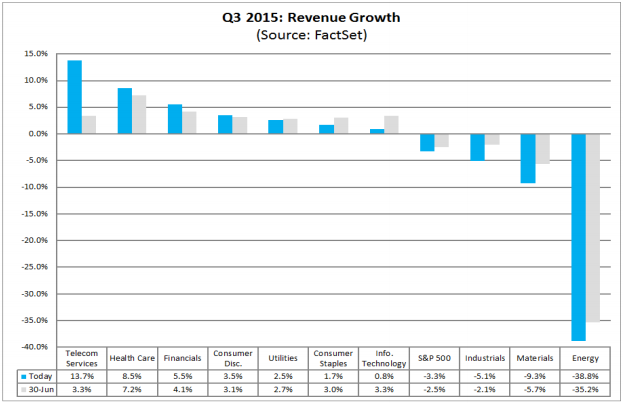 Here's another statement of the obvious that might get lost in the heat of a market downturn: Industrials, Materials, and Energy stocks are trending down in both profits and sales. If the market enters a correction, or even a bearish phase in the next year, you must be selective in these sectors and focus either on companies that are bucking the trend, or those which you deem to be oversold, and compelling on a value basis.

Being stuck in the middle of these two poles -- that is, purchasing companies in these sectors with no imminent rebound prospects, but no convincing value traits, either -- isn't a safe place to be in a weak market.

Sector-based investing may become more important in 2016
While allocating portfolio purchases to rising sectors is a handy near-term investment strategy in most market environments, if conditions deteriorate this fall, it may be more advisable than usual to pay attention to where you put your money. Stocks of a feather tend to rise and fall in tandem. A strong sector can protect a middling stock, and by the same token, a degraded sector can't do much to lift a beaten-down ticker. But perhaps that's stating the obvious?