Please ensure Javascript is enabled for purposes of website accessibility
Log In Help Join The Motley Fool
Free Article Join Over 1 Million Premium Members And Get More In-Depth Stock Guidance and Research
By Daniel B. Kline - Sep 30, 2015 at 1:20PM

The company has a lot of positives, but it needs to work on some areas of customer service.

For the past two years I had admired CEO John Legere's efforts to disrupt his industry and turn a business that's been notoriously consumer unfriendly into one that puts people first. My decision to move from fan to customer, however, happened with the release of the latest iPhone.

With that launch, the Un-carrier also rolled out a massive expansion of its Extended Mobile Range LTE network, which Legere said in a press release "now reaches over 290 million Americans" before pointing out that there are only 320 million people in the United States. The new iPhones, he added, "come with T-Mobile Extended Range LTE support built in."

That was enough to convince me that the third-place wireless carrier, which had the fourth-place network according to the latest RootMetrics report, was a viable option for me. The LTE expansion improved coverage at my Connecticut house from decent to good, gave me even better service at our West Palm Beach condo, and even gave me a signal at my family's New Hampshire home.

Switching to T-Mobile saved me a few dollars a month over my previous carrier, and it got me the opportunity to upgrade my phone up to three times a year at no charge. It seemed like a good deal, but it came with some pretty major unexpected customer service complications.

The reason I went to customer service
In less than a week as a T-Mobile customer I have dealt with two major problems. The first involved simply getting the iPhone 6s my wife would be using and the iPhone 6s Plus that would be mine to work. Rectifying that problem took multiple phone calls and an in-store visit. The second and larger issue involved the company's mobile hotspot service.

This is what a working hotspot setup screen looks like. Source: author.

The plan I signed up for included that option, and it was one I intended to put to near-immediate use. That, however, was not to be the case, since the service didn't work and efforts to launch it brought me to a screen that told me it wasn't enabled, giving me the option to call or visit a website (which attempted to sell me the service for which I was already paying).

The good: quality people
While my interaction with T-Mobile customer support both on the phone and in person were frustrating, the people I was speaking to remained upbeat and seemed legitimately interested in helping me. Each of the 15 or so people I interacted with across multiple phone calls and two in-store visits appeared to be acting to the best of their abilities and training to solve my problem.

The bad: lack of communication
In theory, the T-Mobile computer system had a record of my issue and even a ticket filed, ratcheting it up the tech support chain. In reality, each time I spoke to someone new, he or she appeared to have no knowledge of my complaint.

This happened repeatedly, as I was passed off to various support options. Even when my issue was escalated to a tech-support supervisor, he repeatedly asked about my problem "accessing the Internet on my phone," which was of course not the issue I was dealing with.

The ugly: nobody knew anything
All of the very nice people on the phone and in the store not only were unable to help me; they also did a poor job actually looking at the problem. Someone should have noticed that the "personal hotspot" choice, which you can see on the graphic to the right, didn't even appear. Instead, it was only a choice under the "cellular" menu, and even then it either was unclickable, with an endlessly spinning loading indicator, or it took me to the error message I described. 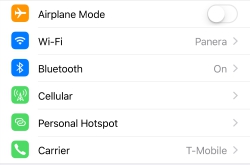 On my phone, "Personal Hotspot" didn't appear below the "Cellular" menu. Source: author.

In attempting to solve the problem, the various techs had me reset my network setting on multiple occasions. They also told me it was a SIM card issue (replacing the card showed it wasn't). And I was asked to do a full system reboot, which led to a slow, painful wait at the T-Mobile store while my phone restored itself from an iCloud backup. Ultimately I was told to replace my phone (which I couldn't do because the iPhone 6s Plus wasn't in stock at the store that suggested that solution).

Ultimately, nobody I spoke to was able to veer off what was clearly a stock troubleshooting list. Even the escalation that resulted in a ticket that was examined by a higher-end tech resulted in the SIM suggestion. It seemed fairly obvious that it wasn't a hardware problem, and ultimately after spending nearly six hours on calls and in-store, my final store visit (where my SIM card was changed and my phone was totally reset) resulted in no answer and a dead end.

At long last, salvation
Afterreturning home from the store, I again called customer service. This time when I was transferred to the tech department, the person on the other end of the phone knew immediately what I was talking about. He told it was a systemwide issue affecting a large percentage of all new iPhones, which would be solved in a few hours.

He told me that an alert had popped up in the system "not more than an hour ago." He also gave instructions as to how to reset my network settings, which would make the fix work for me.

When I did that the next morning, everything was fixed. My phone now worked as a hotspot, and it's worth noting that despite the hassle, it's a surprisingly fast Internet connection.

Great attitude, flawed systems?
It seemed from the beginning that none of the approaches the phone and in-store reps suggested were likely to work. It also felt like while everyone was nice, the system for sharing information between reps was flawed.

This was proved when -- about six hours after I managed to first use the hotspot -- the original support person who escalated my case also called me again. He gets major points for following up, but his advice to either replace my phone, get a new SIM, and/or do a full factory setting reset came well after T-Mobile in a broader sense had identified the source of my issues.

T-Mobile offered me a good price, great coverage, and friendly customer-service people who were patient and understanding, while not being able to solve my problem. If the company can improve its customer interactions and teach its employees to think a bit off script when a perplexing issue presents itself, then it will fully be what Legere wants it to be.