Chipotle (NYSE:CMG) Co-CEOs Steve Ells and Monty Moran are the two highest-paid executives in their industry, taking home nearly $60 million between them last year. But those huge salaries are a consequence of a sharply rising stock price rather than a business culture that glorifies the top brass. In fact, Chipotle's entire approach to labor -- from hiring, to training, to promoting, to pay -- makes it clear that the real stars of the company can be found in the kitchen, not the boardroom.

More than just talk
Every company says that its front-line employees are important to its success. But Chipotle takes that idea a lot further than rivals. High-performing people are fundamental to the restaurant chain's operating strategy, management says -- as critical as its innovative approach to preparing and serving fast food.

"Our unique food culture and our unique people culture..allows us to do things in ways that are unusual within the industry," Ells said in a recent conference call with investors. By "unusual," he could be referring to the company's awesome 17% sales jump at existing locations in 2014, or its improvement in profitability to a new record high. 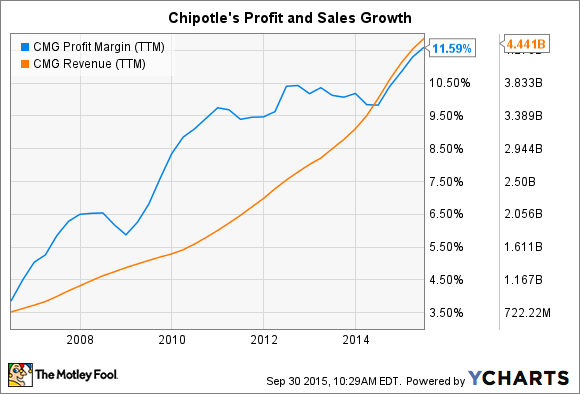 One of the biggest things that sets Chipotle apart from competitors is its resistance to franchising, which is how restaurant chains traditionally raise cash, construct a steady sales stream, and disperse risk and expenses among a wide pool of owners. Fast -food king McDonald's couldn't be more flattering of this approach, saying in its 10-K that "even in periods of softer performance ... cash from operations benefits from our heavily franchised business model as the rent and royalty income we receive from franchisees provides a stable revenue stream that has relatively low costs." Already at over 80% franchised, Mickey D's is busy selling company-owned locations to get that rate to a projected 90% by next year.

In contrast, Chipotle doesn't franchise a single one of its locations. That different approach allows the company much more control over who's in the kitchen and who's running the burrito line. Its recent national hiring spree is just one example of the type of thing that a heavily franchised chain couldn't pull off.

These employees impact the quality of the guest experience and also have direct influence on operating results. Restaurateurs are the "centerpiece [that] leads to a better dining experience for our customers, better tasting food, faster throughput, the development of extraordinary future leaders, better business results, and ultimately the creation of significant shareholder value," executives say. Over 90% of these managers are promoted from crew-member status.

Paying up for performance
It costs a lot to compensate employees that generate impressive results like those. And the price tag for holding on to that talent is rising quickly. Chipotle said that it gave its managers a 4.2% average raise last quarter, for its highest increase in years. The hike was necessary, Chief Financial Officer John Hartung told investors, "because we desire and expect to attract and reward only top performers, [so]  it's very important for us to stay ahead of the curve and pay attractive starting wages.

Chipotle is also investing more cash into its people-development spending, to the tune of $10 million per year beginning this quarter. The rising labor expenses will reduce profits, just like spiking ingredient costs tend to do from time to time. But since Chipotle views its people culture as a key competitive advantage, the extra spending is easily justified. "We make these investments knowing it will make our company stronger," Hartung said.